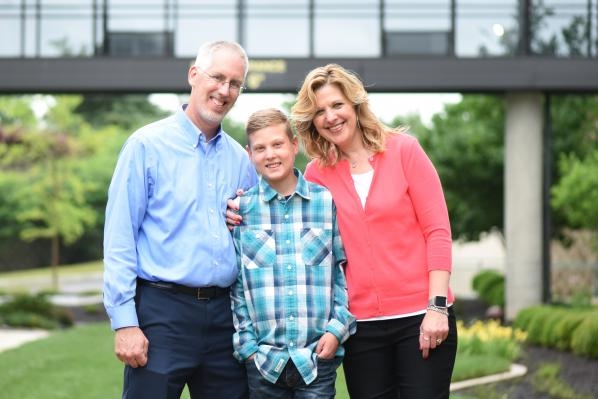 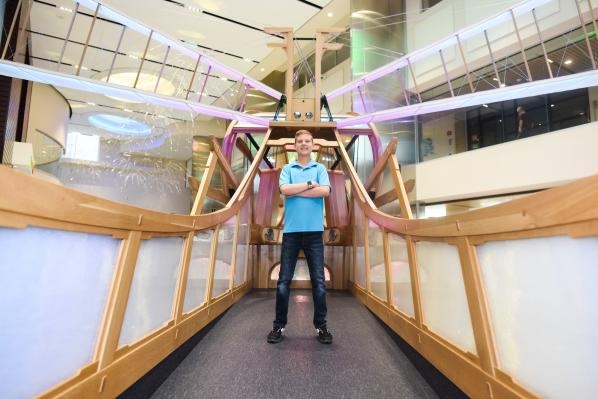 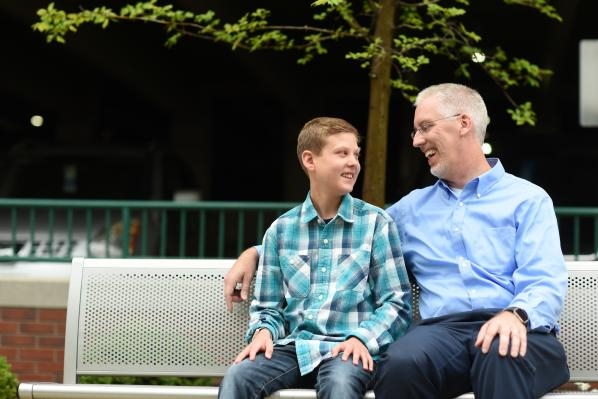 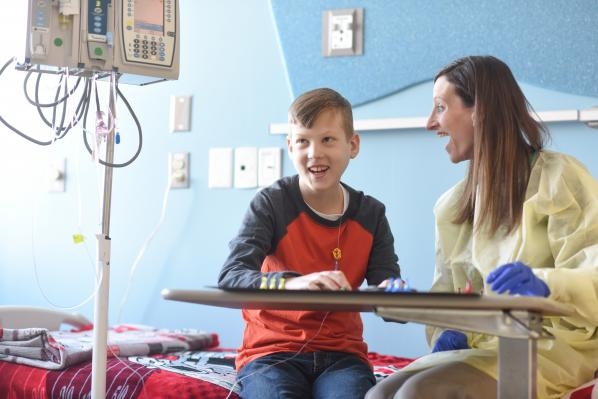 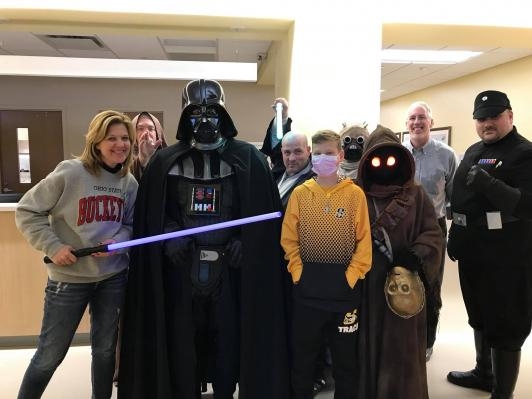 staying on the sunny side of cystic fibrosis

Luke Bemus doesn’t have to wake up in the morning and tell himself to be positive. He just… is. And that’s pretty amazing, considering what Luke has to deal with every day of his life.

Luke has cystic fibrosis (CF), a rare, genetic condition that causes mucus buildup in the lungs, pancreas and other organs. The thick, sticky mucus clogs Luke’s airways and makes breathing difficult, and it prevents his body from creating enzymes needed to digest food. So, at least three times a day, Luke takes 45 minutes to do a breathing treatment and wear a “percussion vest” that shakes the mucus loose. Then there are the pills—more than 50 a day to help his body digest food and prevent the infections that are so common among CF patients. 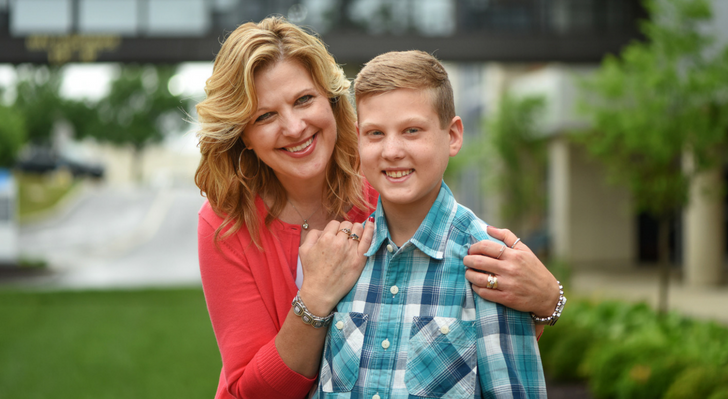 But even when 14-year-old Luke and his parents manage all of his care perfectly, he still battles symptoms like fatigue, nausea, constipation and pain. Breathing can be a struggle, too, especially in the fall when mold counts are high. In the last seven years, he has been hospitalized 35 times for infections, digestive issues, blood transfusions and surgeries.

Luke refuses to let any of that hold him back. Last year, he earned straight A’s and was student council president, despite missing 85 days of school. He plays bass guitar in his church youth group’s band, and viola in the school orchestra. He loves golf and being an uncle to his two nieces and three nephews, and can’t wait to begin his freshman year at Sidney High School in the fall.

Luke showed signs of CF as a baby, but doctors attributed them to a milk and soy allergy. However, as Luke got older, he developed breathing problems as well, and his pediatrician referred him to Dayton Children’s for an asthma evaluation. After examining Luke and reviewing his medical history, Dr. Gary Mueller, a pulmonologist at the hospital, tested him for cystic fibrosis. When the results came back positive, Dr. Mueller and one of the cystic fibrosis clinic nurses met privately with Luke’s parents, Dave and Tammy. It was November 18, 2010.

Tammy still gets emotional when she talks about that day. “I was so shocked. I didn’t know what to think or what to do,” she says. “But one of the first things Dr. Mueller said to me was ‘we will become your second family.’ And that has absolutely been true—Dr. Mueller and the entire staff treat Luke as if he is their own son.”

Luke’s life would now include daily treatments, endless pills and frequent doctor visits. But as the Bemus family soon discovered, cystic fibrosis can cause serious complications, some of them life threatening. Six months after his initial diagnosis, Luke was diagnosed with a rare liver disease that causes an enlarged spleen and bleeding issues. Then, four years ago, he contracted an infection called non-tuberculosis mycobacterium abscessus, which led to an intensive antibiotic regimen. In July 2015, part of his lung was removed to eradicate the infection, which is causing serious damage to Luke’s lung. He continues to receive treatment to suppress the infection.

When Luke is hospitalized, the family brings plastic bins stuffed with bedding, posters and decals, and transforms his room into an Ohio State football shrine—just like his bedroom at home in Sidney. The care team does its part to make Luke feel at home, too. For instance, the dietary department cooks special foods to accommodate the fact that he has celiac disease—essentially, an allergy to gluten, a protein found in wheat. “They have created recipes for all kinds of gluten-free foods for me, like mac and cheese and onion rings,” Luke says. “One time they even bought some gluten-free chips so I could have nachos. Those tasted just like the ones at the gas station!”

During Luke’s hospital stays, child life specialists stop by regularly with arts and crafts materials so that Luke can put his creative genius to work. Recent masterpieces include a Plinko board, a Skee-Ball game made out of cardboard and hot glue, and a lemonade stand that Luke assembled and set up by the nursing station.

Experiences like these make Luke extra excited about being a Dayton Children’s 2018 ambassador. “The nurses and child life people and Dr. Mueller have done so much for me that I really want to give back as much as I can,” Luke says. “I already tell people all the time how great the hospital is.”

ready to conquer the world

Living with the reality of cystic fibrosis isn’t easy for the Bemus family, and on difficult days, they know it’s more important than ever to stay positive. “Our faith in God plays a very big role in our lives, and we trust him to take care of us,” Tammy says. “With all the adversity that Luke has faced, it amazes me that he always has a smile on his face and is ready to conquer the world. Dave and I are so proud of him. He’s an inspiration to us, the rest of our family, his friends and so many other people. Luke really is amazing!”

While a positive attitude comes naturally to Luke, he sometimes feels the weight of having cystic fibrosis. “Every so often I get down in the dumps, but then I just focus on the bright side of things,” says Luke. “They say there might be a cure for CF by 2040, and that’s in my lifetime. So I will just do my best until then.”