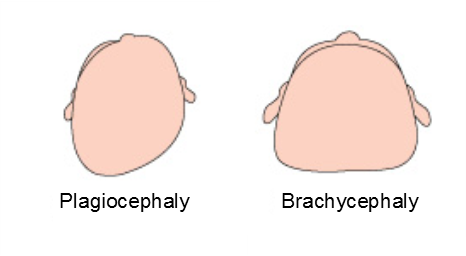 what is positional plagiocephaly?

Positional plagiocephaly is flattening or molding of an infant’s skull due to prolonged contact with external surfaces. It often becomes apparent when an infant is two or three months old. Also known as abnormal head shape or flat head.

There are two major types of plagiocephaly:

1. Infants with occipital plagiocephaly have a head shape that looks like a parallelogram. The ear will be forward on the same side as the flattened part of the head.

2. Infants with flattening across the entire back of the head have a kind of plagiocephaly called brachycephaly.

what are some risk factors?

There are many factors that can contribute to plagiocephaly. Some examples are prematurity, gender (more frequent in males), first born, early descent into the pelvis, carrying more than one baby during a pregnancy, prolonged labor, vacuum extraction or forceps delivery, a pooling of blood between the skull and skin, developmental delay, torticollis and a prolonged period of time lying on the back.

Safe sleep guidelines from the National Institute of Health help reduce your baby’s risk for Sudden Infant Death Syndrome (SIDS). The guidelines state that infants should sleep on a firm sleep surface in a safetyapproved crib, bassinet or portable play area. In addition to increasing the risk for SIDS, sleeping in anything other than a standard crib, bassinet or portable play area can increase the risk for plagiocephaly/ bracycephaly. Do not use a car seat, carrier, swing or similar product as baby’s everyday sleep area.

In 1992, the “Back to Sleep” guidelines were recommended by the American Academy of Pediatrics (AAP). These guidelines were created to try to decrease the incidence of SIDS. The “Back to Sleep” campaign recommended infants sleep on their back or sides. Since the guideline change, the rate of SIDS in the US has declined by more than 40 percent. With that, the rate of plagiocephaly increased. Prior to 1992, the rates were 1 in 300 infants. It is now estimated to be as high as 1 or 2 infants out of 10.

In the early 1990’s, infant car seats were redesigned to double as an infant carrier or could be used in a stroller. The use of these multi-purpose infant seats was found to be a risk factor for plagiocephaly. This is because the infant no longer needed to be repositioned. The infant stayed in the same position for prolonged periods of time during the day.

how is it diagnosed?

Physicians can identify torticollis and plagiocephaly early on by completing a thorough exam. Sometimes, an ultrasound or X-ray may be used to confirm the diagnosis. Early referral to a neurosurgeon for evaluation and treatment is important. This is because the most rapid head growth occurs between birth and six months of age, followed by ages six months to 12 months.

how is it treated?

If torticollis is identified, physical therapy should be recommended. Changing your child’s head positions frequently and supervised tummy time is probably the most important treatment. This can result in a better cosmetic outcome if started at the earliest signs of flattening. Helmet therapy is often used only when a case is moderate to severe. It’s also usually not considered useful after 12 months of age. This information should be remembered and reinforced throughout the first year.

This page was created by a neurosurgery team member at Dayton Children’s using the references listed below:

A physician referral is necessary prior to the child’s first outpatient visit. All follow up appointments will be made during your clinic visit or by calling central scheduling at 937-641-4000.