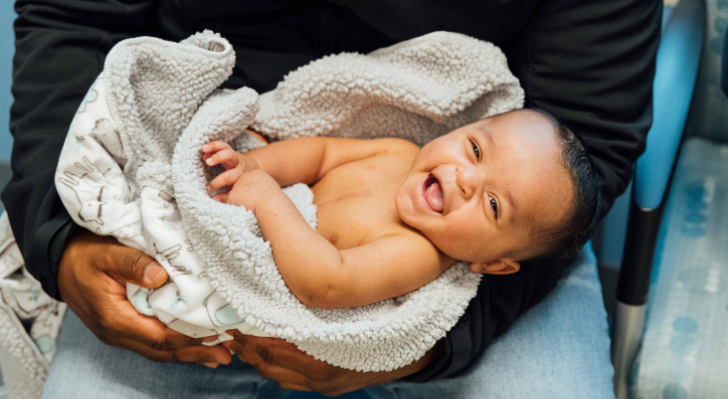 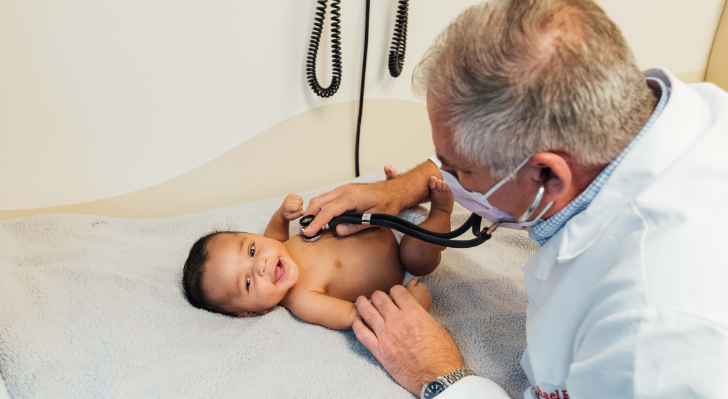 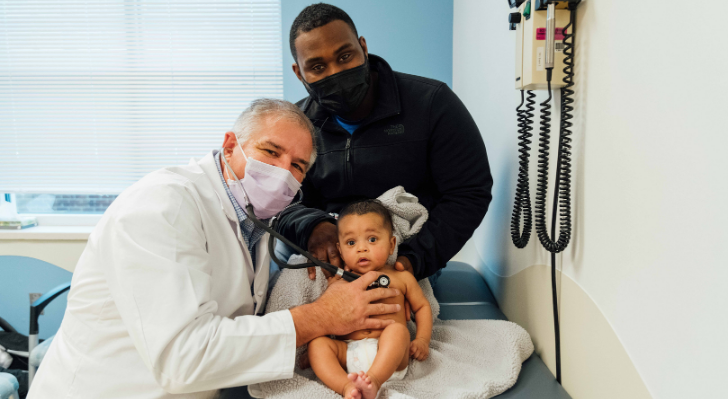 When Kade Findley was brought home from the hospital, his mom, Grace, noticed he was unresponsive. Kade didn’t want to wake up, he didn’t want to eat, and he wasn’t urinating. As a first-time parent, Grace wasn’t sure if these behaviors were normal of infants, but she had suspicions that something more was going on. When Kade finally had a wet diaper, the urine was red and looked like blood. Grace called Kade’s primary care provider who directed her to take Kade to their local emergency department. After consulting with pediatric emergency medicine providers, Kade was transported and admitted into the neonatal intensive care unit (NICU) at Dayton Children’s.

Upon arrival in the NICU, Kade’s urine was tested, and the results showed a high concentrate of urate crystals. Urate crystals are not uncommon for infants. They can appear if a baby is the slightest bit dehydrated, causing the urine to be more concentrated. Kade was put on an IV to rehydrate and to provide him with the nutrients needed to properly develop.

not just a murmur

With the hydration concerns under control, Kade’s providers were able to focus on the other concern at hand. When Kade was born, he had a strong heart murmur. Heart murmurs are very common, and most will go away on their own as a child gets older. Sometimes, like in Kade’s condition, a heart murmur can indicate a problem with the heart. Pediatric cardiologist, Elizabeth Mitchell, MD was called in for a consult on Kade’s heart murmur. After listening to his heart and performing an echocardiogram, Kade was diagnosed with severe congenital pulmonary valve stenosis. Severe congenital pulmonary valve stenosis is a condition where the pulmonary valve in the heart is too small, too narrow and can’t open all of the way. This causes one side of the heart to work harder and eventually will cause the heart to strain.

If Kade’s severe pulmonary valve stenosis would have gone undiagnosed he could have developed low blood pressure, poor circulation and eventually heart pump failure. This explains why Grace would notice Kade getting really sweaty and his breathing becoming loud and rapid. Kade remained in the NICU at Dayton Children’s and was watched carefully over the next few weeks. His condition worsened and it was determined Kade would need to have surgery on his heart. During the same time, Dr. Mitchell went out on maternity leave and pediatric cardiologist, Michael Ralston, MD stepped in to ensure Kade continued to receive the best care possible.

Kade’s first surgical procedure at Nationwide Children's was on December 8, 2020. During this procedure, the surgeons performed a percutaneous pulmonary balloon valvuloplasty, also known as a heart catheterization. This procedure was done to try and avoid surgery, but Kade did not respond well to the procedure and it was determined he would need to have open heart surgery.

Open heart surgery was scheduled for December 18 with his care team at Nationwide Children's. During the procedure, Kade’s surgeons put a patch material on his pulmonary artery to stop his valve from obstructing blood flow. By doing this, his severe pulmonary valve stenosis was relieved, allowing him to eat, grow and play like a normal child. As long as Kade’s valve continues to function properly, he will not need any additional surgical care or treatment, and his care can remain in Dayton with pediatric cardiologist, Michael Ralston, MD and Dr. Mitchell.

Kade was only in the hospital for four days following his surgery. Nationwide Children's monitors their length of stay for open heart surgery patients and are constantly trying to improve and shorten the length of stay while maximizing the safety and care of their patients.

“I couldn’t be more pleased with the entire process” said Grace. “The communication between both hospitals was excellent. It didn’t matter if we were with the surgical team at Nationwide Children's or Dr. Mitchell and Dr. Ralston at Dayton Children’s, Kade’s providers were always informed of his latest progress.”

If anyone knows what Kade is going through, it’s Grace. She was diagnosed with the same condition as a newborn and also saw Dr. Ralston for care until she became pregnant with Kade. Grace’s congenital pulmonary valve stenosis was a lot milder, while Kade experienced a more severe version of the condition.

While Grace no longer sees Dr. Ralston, she doesn’t have to go far for care. Our pediatric cardiology team partners with other health care providers from Nationwide Children's to care for adults who have a congenital heart defect. Patients, like Grace, benefit from Nationwide Children's expertise while still interacting with familiar Dayton Children’s providers, all in the comfortable setting of the cardiology clinic at Dayton Children’s.

Kade is now home and thriving! Since his surgery, he has followed-up with Dr. Ralston and passed his examination with flying colors. Going forward, as long as there are no complications, Kade will only need to visit the cardiology clinic once a year to monitor his pulmonary valve to see if he will need intervention in the future.

“Kade has done wonderful since his surgery and he has no pulmonary obstruction now” said Dr. Ralston. “We anticipate great things of him in the future.”