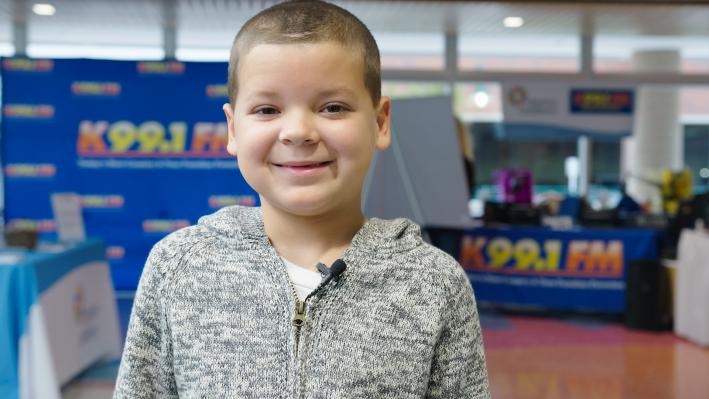 JD visited the K99.1FM Cares for Kids Radiothon just two weeks after his surgery to share his story of survival. 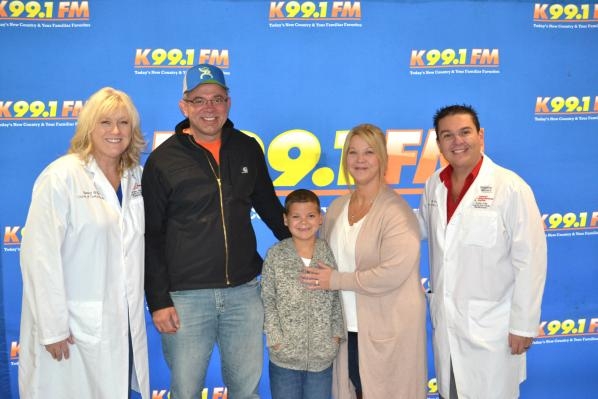 JD visited the K99.1FM Cares for Kids Radiothon just two weeks after his surgery to share his story of survival.

At one point or another, most moms deal with tummy troubles in their kids. From the “mom, my belly hurts, I can’t go to school,” to the middle of the night vomiting spree down the hall, it can sometimes feel like dealing with these stomach rumblings are just synonymous with being a mom.

But for Pamela Smethers, tummy troubles in her 8-year-old son, JD Shope, quickly went from being normal kid stuff to wondering if something worse might be going on.

In the spring of 2017 JD began throwing up somewhat regularly. It wasn’t enough to keep JD down, but enough that Pam felt the need to take him to his pediatrician, Dr. April Bunn. Dr. Bunn recommended JD see a gastroenterologist to see what might be causing the issue.

JD began seeing Dr. Shehzad Saeed at Dayton Children’s. Dr. Saeed started JD on some medicine and performed a variety of tests including a scope where they look inside the body to see if he might have Crohn’s disease. All of the tests came back negative.

“At this point JD was feeling bad most of the time and throwing up multiple times a week,” shares Pam. “His school nurse was even keeping tally marks of how often he was coming to the office after throwing up.”

After another new medicine failed to work in the fall of 2017 Dr. Saeed decided to run one more test. 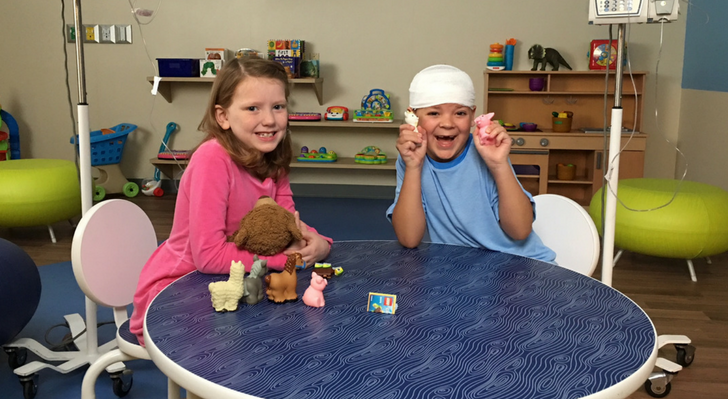 “It is not uncommon for us to do neurological imaging for symptoms of throwing up but it is rare that we find anything significant,” says Dr. Saeed. “But at this point it was either that, or refer him for a second opinion, so it was worth a shot.”

On his 9th birthday, JD came to Dayton Children’s for a CT scan of his brain.

“After the CT scan we went home to celebrate JD’s birthday,” remembers Pam. “My phone started ringing from Dayton Children’s almost immediately but I figured it was just an automated message. With the birthday party happening at my house I ended up missing three calls from the hospital. It wasn’t until 8:00 that night that they finally got in touch with me.”

Kathryn Williams, MD, the gastroenterologist on call that evening, had some difficult news to deliver to Pam. JD’s CT scan revealed an egg-sized tumor in his brain.

“She said to me ‘How far away do you live from Dayton Children’s and how soon can you be here?,’”  says Pam. “I was listening to her tell me the facts but I just kept thinking I was imagining it all.”

When JD and his parents arrived at Dayton Children’s main campus, the emergency team had been waiting for them. They took them back to a room immediately and began telling them what was going on. They were told that JD would need to be admitted and started on medicine right away.

Pam and her husband, Jason, along with the doctor and nurses in the emergency department began to explain to JD what was going on. “He looked at me and said ‘Mom, I’m scared. I want to go home. It’s my birthday.’”

Even though this was arguably the scariest moment of JD’s life, the staff at Dayton Children’s wasn’t going to let him miss out on celebrating his 9th birthday. By the time they made it to his room on the Comprehensive Cancer and Blood Disorders Center floor, his room had been decorated for his birthday, he had a bouquet of balloons and special pudding with gummy worms in it!

The next 72 hours were a whirlwind as the family met with doctors and nurses to determine next steps.  Saturday morning, Robert Lober, MD, neurosurgeon at Dayton Children’s, reviewed the results of JD’s latest MRI and discussed surgery.

“When we got into the surgery we realized that the tumor was more complicated than what we had seen on the MRI,” says Lober. “I called Pam during the surgery and told her it was possible JD would wake up with neurologic defects and that at this point we were just going to have to do our best and pray.”

Dr. Lober and fellow neurosurgeon, Kambiz Kamian, MD, monitored JD throughout the night concerned that they might have to do another surgery. 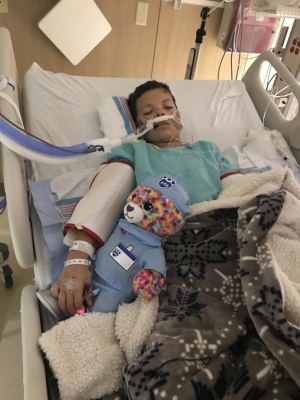 “At 7:00 am the next morning Dr. Lober and Dr. Kamian walked into our room grinning from ear to ear,” shares Pam. “They said ‘we got everything and the results are great!’ My husband just hugged them and said ‘thank you so much for saving my son.’”

JD still had another six days to spend in the hospital where he began physical and occupational therapy to regain feeling from the temporary paralysis on his right side of his body. After leaving the hospital he continued to see the same therapist for another month as he worked on gaining strength.

“I knew he was getting better when he looked at me one day and said ‘Mom, I can run now! I can feel my foot!’”

Even though it took some time for his body to get back to normal, JD’s personality never wavered. He continued to show his light-hearted, funny and even generous and caring side almost immediately.

“It’s amazing to me that someone can have brain surgery and wake up as still the same person, but that’s what happened with JD,” says Pam.

Only two weeks after surgery JD returned to Dayton Children’s for a follow up appointment with Dr. Kamian. During this same appointment JD was cleared to go back to school.

“He was so surprised by how well JD was doing that he talked him into a surprise attack on Dr. Lober,” remembers Pam with a laugh. “Dr. Kamian told JD to hide while he went and took Dr. Lober out of another appointment. When he made his way into the hallway JD jumped out to surprise him!” 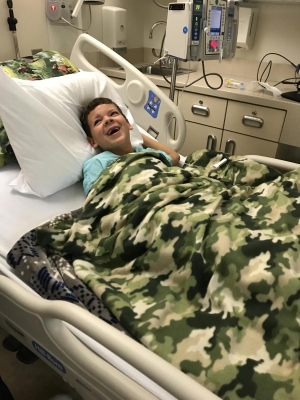 “I can’t tell you how happy I was to see him just a few weeks after surgery doing so well and literally bouncing off the walls,” shares Lober. “Kids like JD are the reason we do what we do. He truly inspires me and makes my job super rewarding.”

JD’s most recent MRI in January showed no tumor growth, meaning he would not have to have chemotherapy or any other treatments. While JD will have to be monitored every few months this year and then into adulthood, for now he gets to go on enjoying being a 9-year-old boy.

“JD is only the second patient in my 20-year-plus career whose neurological testing came back as the cause for the symptoms. The moral of his story is to keep on looking for reasons and be willing to think outside of the box for finding out issues,” says Saeed.  “JD has bounced back really quickly which really just speaks to what a spunky kid he is!”

“You always think this type of stuff will happen to someone else, but it’s different when you’re walking in those shoes and it’s you” says Pam. “But the thing that stands out the most to me about this experience is the people. From the cleaning lady to the doctors and nurses, everyone always showed such genuine concern and never made me feel like a pain. We felt like a patient and not a number; that’s the best way to explain our experience at Dayton Children’s. We truly thank God for our amazing children’s hospital!”

08/15/22 | blog post when to be concerned about tummy aches Tummy aches are one of the top reasons parents bring their child to the emergency department. Learn which symptoms you should be most concerned about.
05/23/22 | blog post caring for type 1 diabetes and celiac disease caring for an increase in children who have both type 1 diabetes and celiac disease

After over a year of unsuccessfully trying to treat constipation, Ida was referred to gastroenterology, where she found answers.