connection and care - no matter where

These two live more than 800 miles apart but share an experience that bonds them tighter than any neighbors. Both Lisa’s daughter, Ava, and Judy have Treacher Collins syndrome. It’s a relatively rare genetic craniofacial condition that affects the formation of the face including the jaw, eyes, cheekbones and ears. An estimated 1 in 20,000 people will deal with its effects.

“There was no history of Treacher Collins in my family,” said Lisa. “I had no knowledge of the condition, so I searched the internet for resources and support groups. That’s when I stumbled across Judy.”

For the past 20 years, Judy has run several online support groups as a Treacher Collins advocate from Charlotte, North Carolina. She has a special understanding of the effects on patients and parents, as both she and her daughter Olivia have Treacher Collins.

“I spent years silently following Judy online,” said Lisa, who lives in Shoreville, Illinois - about two hours southwest of Chicago. “I was drawn to her expertise and helpfulness. She was always offering suggestions to others who had questions regarding treatment for themselves or their child. Because she has been through it, I could tell she really knew what she was talking about.”

As Lisa’s daughter Ava grew, she had had two jaw distraction surgeries at a hospital in Chicago. This procedure splits the jaw bone and slowly separates it. Bone fills in the gap as it heals, lengthening the jaw. Unfortunately as the child grows, the lower jaw normally can’t keep up with the upper jaw growth, and patients require repeat surgeries.

As Ava turned 12 years old, Lisa knew she needed another surgery, but wondered if there was a different surgical approach that would give better results. Around that time, Judy saw a photo of Ava on Lisa’s Facebook page. “I noticed Ava’s recessed jaw and thought I could offer Lisa some resources,” said Judy.

Judy reached out to Lisa online then the pair talked on the phone. Judy told Lisa about pediatric craniofacial surgeon Dr. Christopher Gordon at Dayton Children's Hospital and his expertise with jaw distraction surgeries for craniofacial patients, including his pioneering technique with a special RED device.

“I was very impressed with Dr. Gordon’s resume. But what sold me even more was Judy and her firsthand knowledge of this technique,” said Lisa. “As a parent to a child with Treacher Collins, there is no information I hold more valuable than from another parent who has been through similar jaw surgeries.”

In February 2018, Lisa and Ava traveled to Dayton, Ohio to meet with Dr. Gordon for a consultation. Judy participated in Ava’s appointment over telemedicine monitors. Lisa scheduled Ava’s third jaw distraction surgery for May. 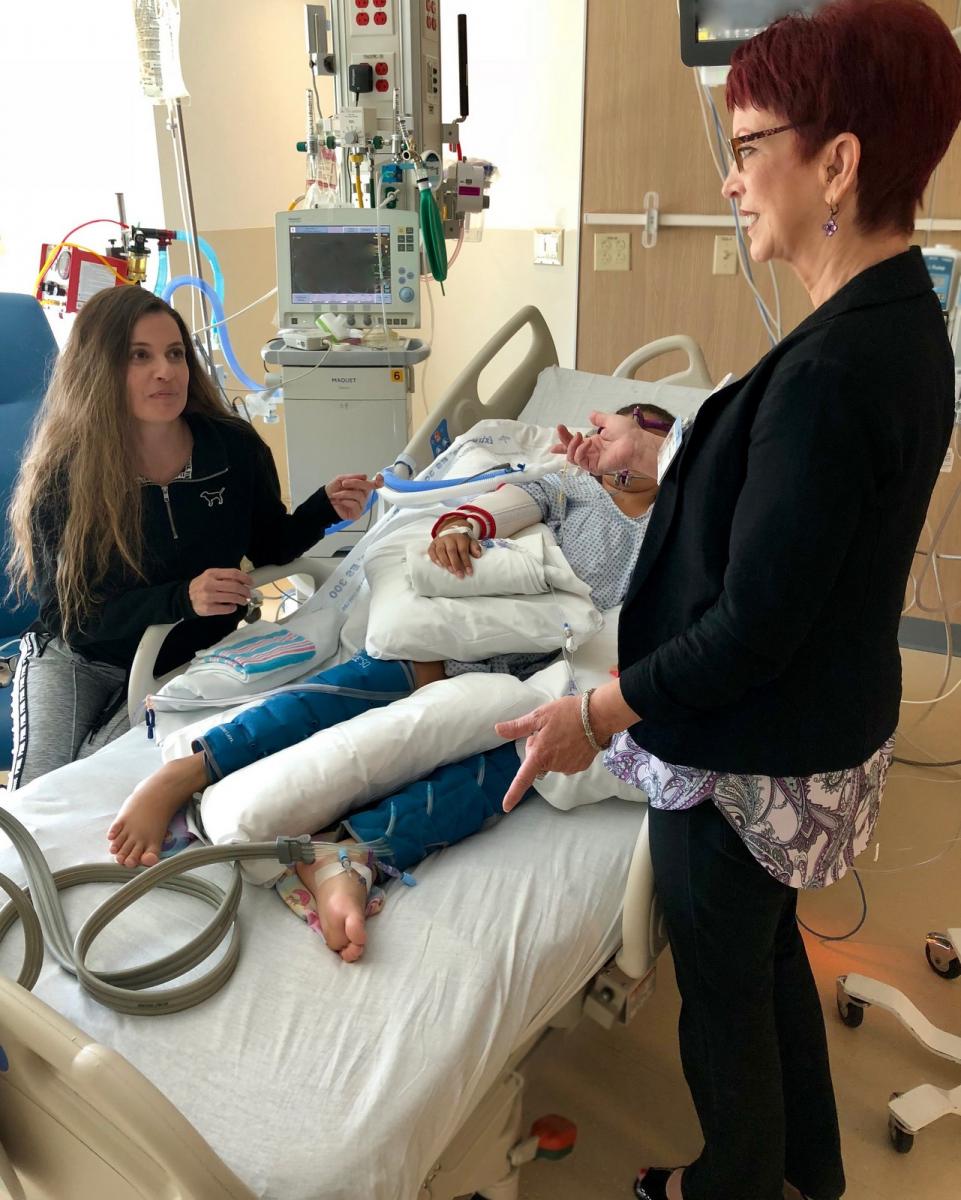 The night before Ava’s surgery, Judy flew to Dayton to meet Ava and Lisa. “Judy took us out to dinner and helped us celebrate the life-changing surgery Ava was about to have,” said Lisa. “Even though it was our first time meeting her in-person, I felt like we were already fast friends.”

Judy agreed. “Over the months, I talked with Lisa and Ava both together and separately. I built friendships with both of them. When I finally met them in-person, I already knew them!”

a friend to lean on

On May 29, 2018, Dr. Gordon performed Ava’s jaw distraction surgery. Judy stayed in Dayton through the week to offer both Ava and Lisa support during her recovery process.

“Because I had already undergone two jaw surgeries with Ava before at a different hospital, I thought I could handle it on my own. I told my husband and my three other daughters to stay home,” said Lisa. “But it turned out I really needed moral support. I’m so glad Judy was there for me.”

Judy held back tears hearing Lisa’s gratitude. “For me, it’s more than a job. I knew exactly the pain she was going through with Ava. I tried to remind her what things were typical in the recovery process so she didn’t feel so alone,” said Judy. “It was a really rewarding experience being there for them.”

In addition to being a shoulder to lean on, Judy frequently serves as a liaison between patients and their care team. “Often parents ask me questions that they’re not sure if it’s appropriate for the doctor or someone else. I always make sure to get the right resources to them when they need it,” said Judy.

Dr. Gordon recognizes the importance of Judy’s role, a unique resource not typically found at other children’s hospitals. “Judy has a lifetime of perspective and knowledge that is valuable to our patients. She offers an honest and critical perspective and does not hesitate to share everything she knows: the good, the bad and the ugly. That candor is what makes her opinion so respected,” he said. “Our families praise her as one of the best parts of their Dayton Children's experience. We are very lucky to have her.”

Like Judy, Lisa also appreciated how Dr. Gordon was there for her and her daughter. “I could text his personal cell phone any time of day and he would immediately respond. His calm demeanor and openness makes him very approachable,” said Lisa. “And he’s an incredible surgeon on top of it.”

Ava’s surgery with Dr. Gordon was not about looks although patients may achieve better facial balance in the process. The most common issue associated with Treacher Collins is a smaller or reduced airway. This can make breathing, eating and sleeping a challenge. Lengthening her jaw provided more room for her airway. “Ava is sleeping so much better now,” said Lisa. “Before she had to be propped up on pillows to keep her airway open. Now she’ll sleep on her stomach right on her face!”

This won’t be the last surgery for Ava; she will likely have a final one in her teenage years. “While this isn’t the end of Ava’s journey, it makes it easier knowing that Judy will continue to be there for her and our family,” said Lisa.

“Lisa and I are stuck like glue!” said Judy. “The bond I developed with Lisa, as I do with my other patients and their parents, are forever relationships.”

Judy and Ava also developed a special relationship. “Ava texts Judy all the time on her own. She is a quiet kid, so for her to open up to anyone is a big deal,” said Lisa.

Judy also connected Ava with other Treacher Collins patients at Dayton Children’s, including Kent Wu. “The two of them text all the time about their pet fish, siblings, school – anything but their medical experiences,” Lisa laughed. “Kids will be kids.”

Lisa is grateful for the Treacher Collins community that Dayton Children's has provided her. “Having Judy be a part of Ava’s surgery and recovery has been invaluable,” said Lisa. “This syndrome can be an isolating experience, but Judy goes above and beyond to make sure we know we’re not alone.”

As for Judy, she considers her job a blessing. “I’m so grateful I can use my experience to help other patients and parents. I look forward to a lifelong friendship with Lisa and Ava,” she said.

the Craniofacial Center at Dayton Children's

From cleft lip to rare genetic disorders, our pediatric experts treat every patient with exceptional care and compassion. From medical needs to counseling, we explain your child’s condition and answer all your questions while helping you understand your treatment options and make choices that are right for your family. To speak with our craniofacial patient coordinator, contact Judy Mosher at mosherj@childrensdayton.org or 937-641-4755.

Judy Mosher is the patient coordinator for the Craniofacial Center at Dayton Children's. She specializes in craniofacial syndromes, research craniofacial genetics, advocacy, networking and hosting annual retreats for syndromic families. She is also the cofounder of the Treacher Collins Network.

Through Judy's many years of advocacy and networking, she has participated in a number of presentations and retreats. One special presentation in particular was a 2004 Discovery Channel documentary called UNMASKED: Treacher Collins Syndrome.

As she and several of her family members have Treacher Collins syndrome, Judy understands the importance of her advocacy and work to a higher degree. She enjoys working with families to guide and help parents find resources that can make a world of difference for their kids. She is excited to work at Dayton Children's to care for children before, during and after their treatment. In her free time Judy is also a beagle rescuer and has four beagle rescues of her own.