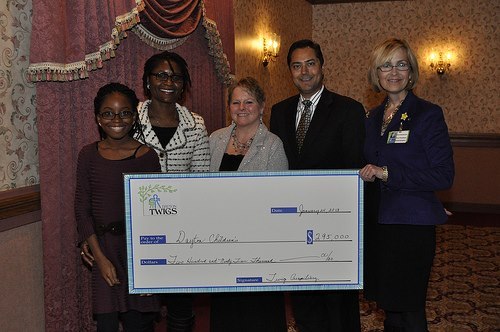 TWIGS (Terrific Women In Giving), the auxiliary of The Children’s Medical Center of Dayton, presented the hospital with a check for $295,000 finishing in just two years the auxiliary’s 2011 three year pledge of $500,000 for the Pediatric Cancer and Blood Disorders Care Endowment.  The check was presented by Debbie Bowers, 2012 auxiliary president, to Dayton Children’s Chairman, Board of Trustees Vishal Soin during the auxiliary’s January 24, 2013 annual meeting at the Presidential Banquet Center in Kettering.

The Pediatric Cancer and Blood Disorders Care Endowment was created to enhance an already family-focused cancer care program that would connect patients with multiple resources dealing with care, treatment, education, support groups, and so much more. Annual interest generated by this endowment will eventually fund a social work position, a child life specialist specifically assigned to the cancer program and patient/family educational materials.

Several members of the community were also recognized during the evening as honorary TWIG members for their outstanding support of the organization. Recognized were:

Among some of the events planned for 2013 are the Gem City Jam Golf Outing and Hoopla on August 19 at NCR Country Club in Kettering and the annual Sugarplum Festival of Trees & Gala event November 22 through 24 at the Presidential Banquet Center in Kettering.

For more information about how to become a TWIG member, contact the development office at Dayton Children’s at 937-641-3405 or join the TWIGS Facebook fan page at www.facebook.com/twigaux.