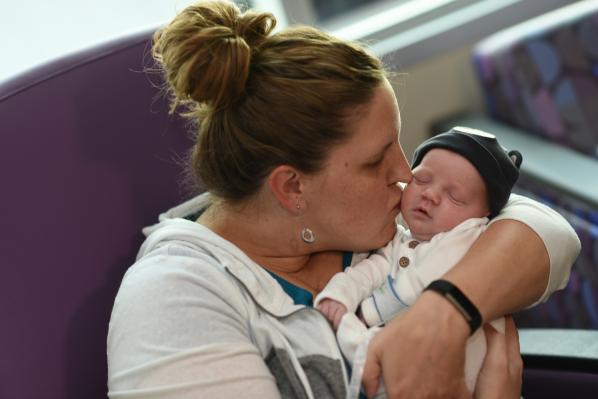 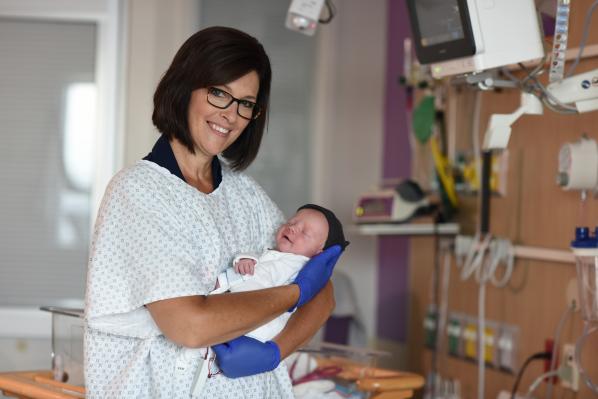 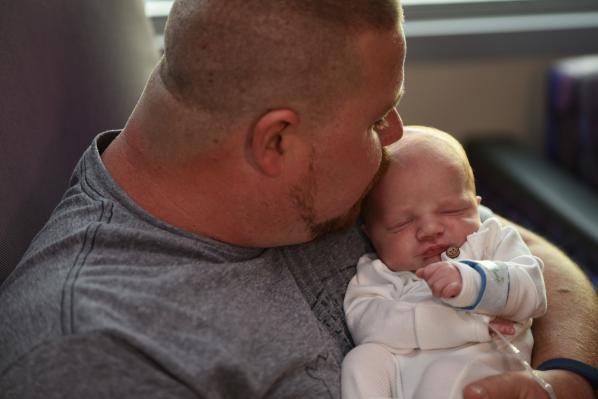 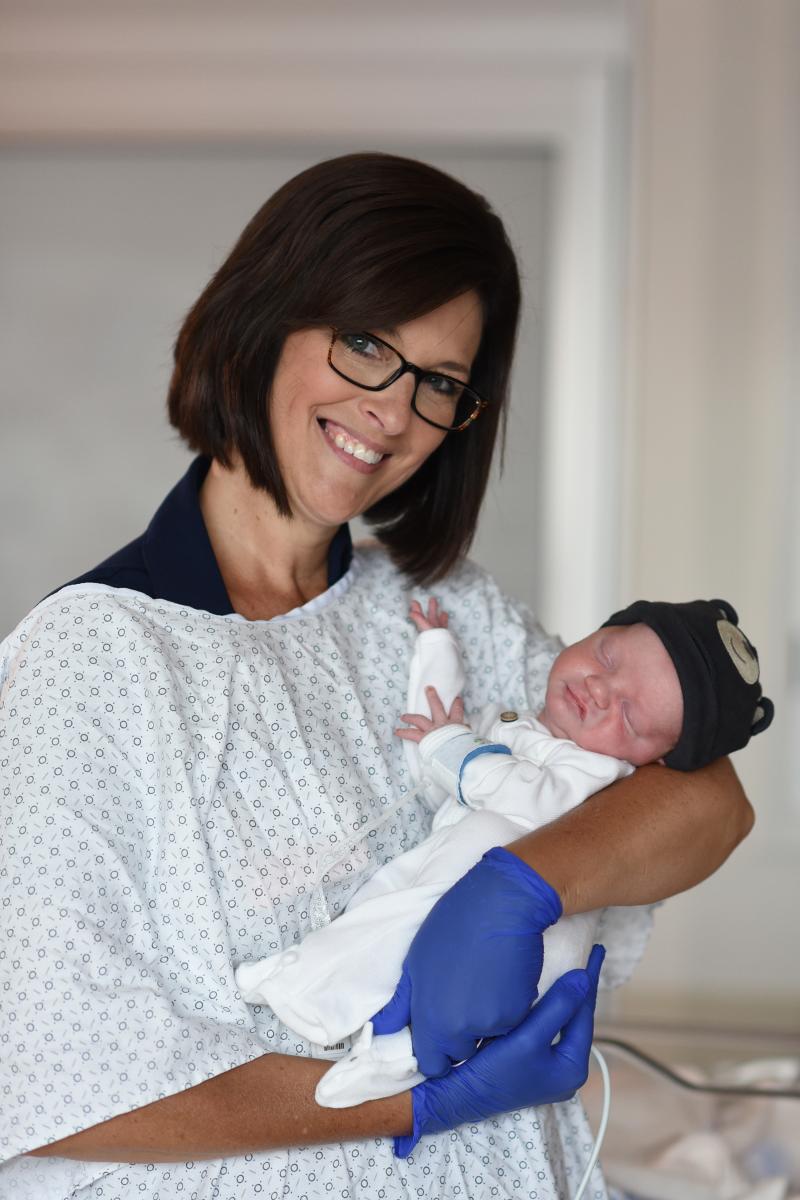 For months, Matt and Sarah Michael prepared for the arrival of their first child. Everything — from where their baby would be born to how they would decorate his room — was planned to the last detail.

Meanwhile, at Dayton Children’s, doctors and nurses on the newborn intensive care unit (NICU) were preparing for a life event of their own: moving day. On July 16, they would relocate from their 19-year-old unit to the hospital’s new patient tower. Everything — from how they would transport their tiny patients to how they would work together in the new space — was planned to the last detail.

By early July, the NICU team was feeling good about plans for the big move. But all the planning in the world couldn’t have prepared the Michaels for what actually happened when their son was born, four weeks early, on July 9.

a scary beginning
“We were shocked that Cason came early, especially since my pregnancy had been so routine,” Sarah says. “After he was born, the medical team put him on oxygen, and the next day he was transferred to the Dayton Children’s NICU. The transfer went smoothly, but it was very scary. Thankfully, from the moment we arrived at Dayton Children’s, we knew Cason was in good hands. The doctors and nurses had a plan for his care before we even got there.”

The NICU team placed Cason on a ventilator to help him breathe, and began giving antibiotics to treat a possible bout of pneumonia. “The care Cason received was wonderful, but I remember feeling overwhelmed by how cramped the NICU was, with its open floor plan and isolettes crowded into one big space,” Sarah says. “There were babies and nurses everywhere with nowhere to move! Our parents wanted to be with us, but there wasn’t a way for six adults to be together at the same time in the NICU. So we had to schedule visitors in waves. When I needed to pump breast milk I had to go to a separate lounge to do it—and to wait for a pump to become available.”

With the NICU move scheduled for just six days after Cason’s arrival, the staff began preparing the Michaels on a daily basis. A nurse, patient liaison and the head of security talked through the logistics with the couple, explaining what would be involved and answering their questions.

“A few days before the move, we went on a tour of the new NICU and started to get really excited,” Sarah says. “It was so different, with the private rooms and pretty décor. We felt completely prepared for what would happen, and not worried at all. In fact, Matt and I decided we didn’t even need to be present for the move that day because the team had it all under control.”

moving day
At 10:00 am on Sunday, July 16, the NICU team began transferring the unit’s 29 critically ill babies to the fourth floor of the new tower, with one baby leaving the old NICU every eight minutes. For the Michaels, the difference between the two NICU spaces was night and day.

“With every baby in his or her own room, the unit was so quiet and peaceful,” Sarah says. “All the monitors and other technology were on one wall, whereas in the old unit some monitors were at the end of Cason’s isolette and really in the way. Our new room had a recliner/rocker and a couch so that people could sit down comfortably. It just seemed like everything was designed to make it a more peaceful environment for babies and families.”

As Cason’s lungs grew stronger, he progressed from tube feedings to bottles to breastfeeding. Sarah was able to pump breast milk in the privacy of Cason’s room, then give the milk to the NICU’s new milk lab, where specially-trained technicians fortified and stored it until Cason was ready to eat. When Matt and Sarah went home for the night, they often logged on to the NicView cam, which live-streamed Cason as he slept or peered at his surroundings, always with a nurse nearby in case a need arose.

On July 27, Cason was ready for his next big move: it was time to go home! Today, he continues to grow and develop, outgrowing his newborn clothes in a hurry. “Cason is doing great, and we are so happy to have him home!” Sarah says. “We can’t thank Dayton Children’s enough for the amazing care he received during his stay.”

Thanks to generous donors like you, new technology like the NICVIEW system was included in the newborn instensive care unit in the new patient tower. 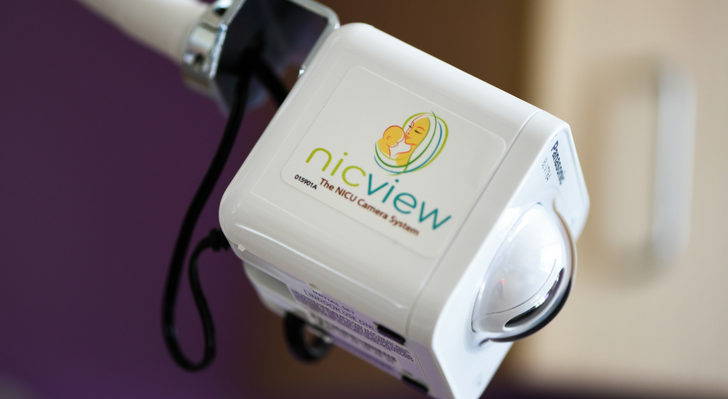 NICVIEW allows families to see baby when away from NICU

The new NICU includes the NICVIEW technology system. This webcam system allows parents and family members to see their baby when they are away from the hospital.