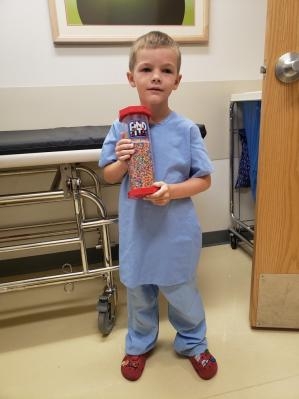 When super active, soccer star Rhett started limping, mom, Jessica wasted no time calling their pediatrician. Their doctor examined Rhett's painful foot and referred him to the orthopedics division at Dayton Children's. Once the orthopedic doctor, Claire Beimesch, looked at Rhett's x-rays, she wanted an even closer look and ordered an MRI.

"According to the orthopedics provider, typically, with an active 5-year-old, MRIs are done with sedation (being put to sleep)," Jessica said. However, when Sarah, the child life specialist at Dayton Children's called to schedule Rhett's MRI, she explained that Dayton Children's imaging now offers the STAR (soaring towards anxiety reduction) program for patients.

"She described how a child life specialist will help prepare Rhett for what he could expect to happen during his MRI," said Jessica. "It was great. She sent us an animated video that Rhett watched that detailed what would happen during his MRI and she even sent us ‘MRI sounds’ to listen to so that he would know what sounds the machine will make during the scan!"

Rhett was no stranger to sedation. Having had several surgeries and a dental procedure with sedation, Jessica knew the potential risks involved for Rhett. "While Rhett has done well in the past with being sedated, I appreciated the option to do his MRI without it," Jessica expressed.

non-sedation MRIs have many benefits, including:

Another big benefit for Jessica was being able to stay with Rhett. "I was so happy I got to sit with Rhett the whole time and hold his hand," she said. "He did so well. He loved wearing the movie googles!"

“I can’t say enough about Dayton Children’s. We love them!”