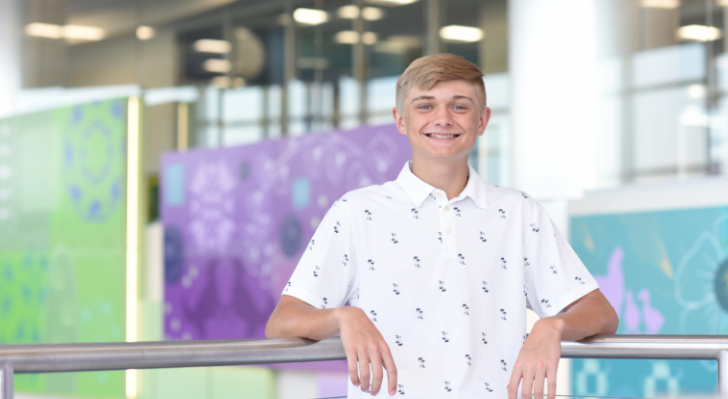 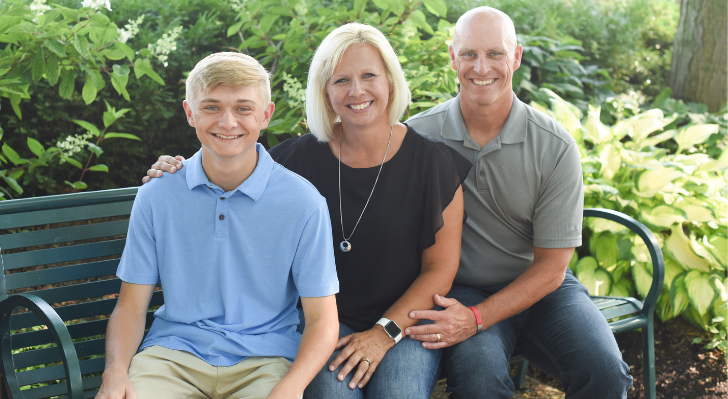 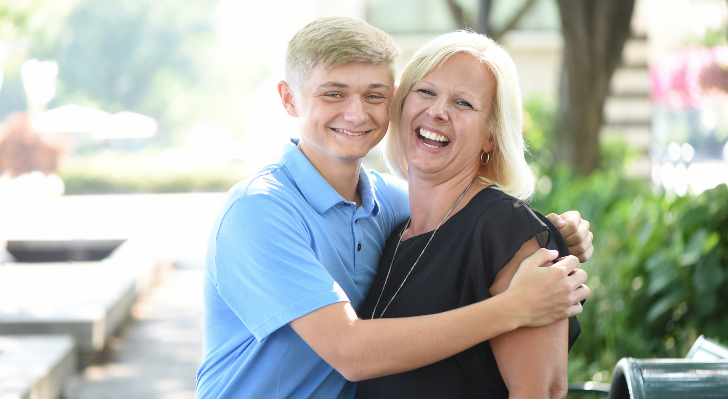 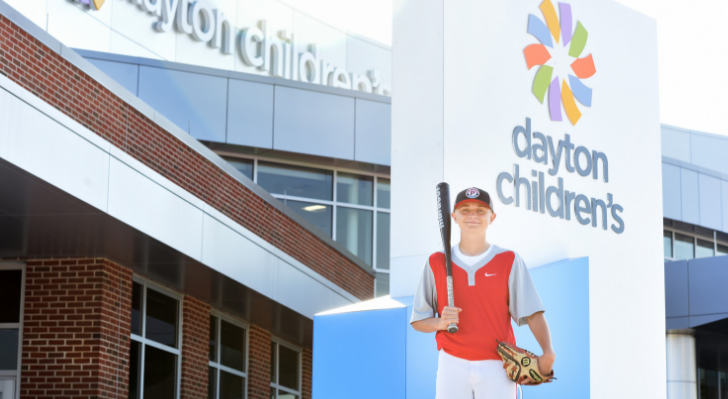 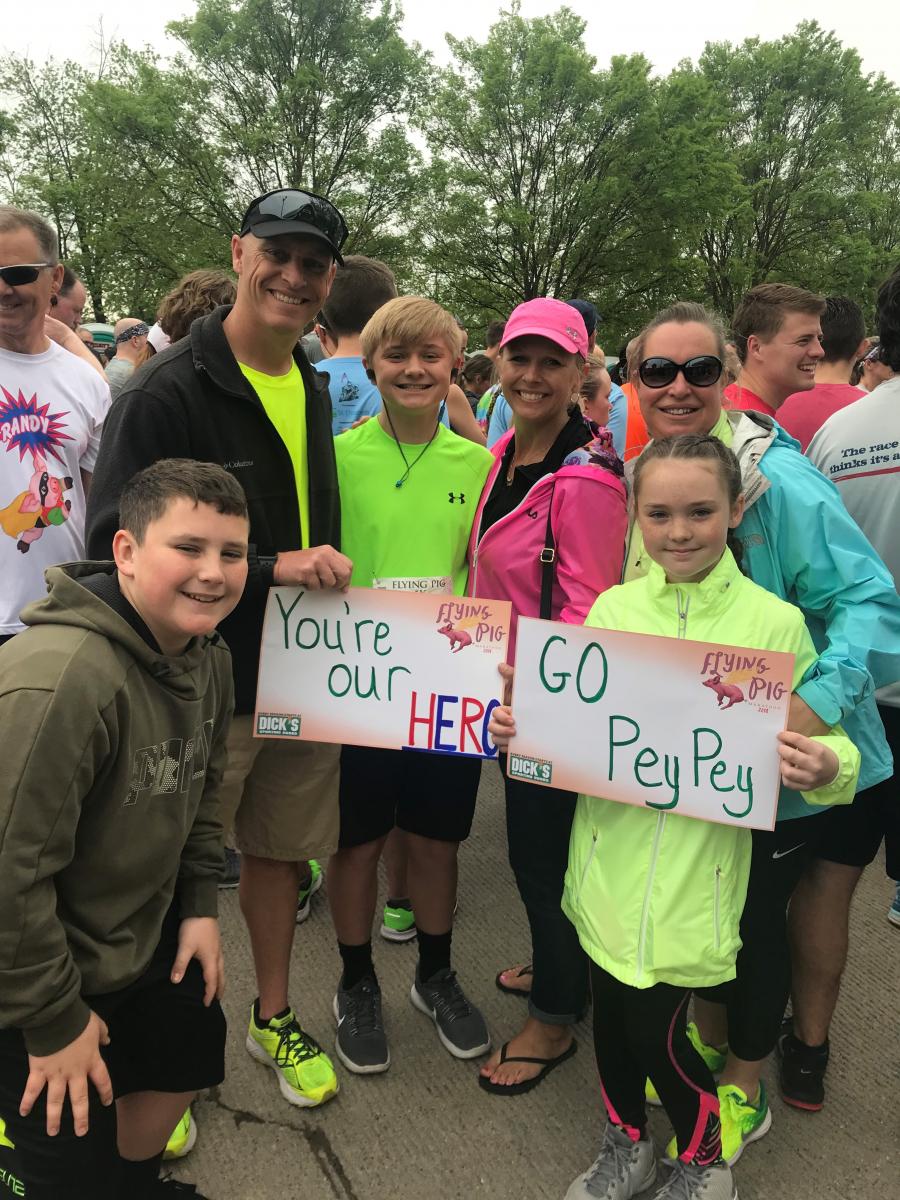 The Taylor family stood on the bridge of Merhing Way in Cincinnati at the Flying Pig marathon 5K, holding their breath… waiting for Peyton to pass under the bridge to the finish line just 100 yards ahead. When the towhead turned the corner, Kasie’s breath caught in her throat. Knowing her son survived brain surgery once and was running a race before his second brain surgery was reason enough for tears.

“The screams of joy from our family seeing him finish the race still rings in my ears today,” Kasie shares. “Peyton is my ironman. We admire his perseverance, he takes whatever life throws at him, accepts it and moves on,” says his dad Charles.

During a routine physical for football, Peyton was flagged for possible scoliosis. He was referred to Dayton Children’s for a follow up X-ray when Alvin Jones, MD, noticed something particular on the images and referred the Taylors to Rob Lober, MD, neurosurgeon at Dayton Children’s who recommended an MRI for a better look.

“I was worried about the referral to neurosurgery, but was still oblivious to how different the next few years of my life would become,” Kasie recalls.

When Dr. Lober pulled up Peyton’s test results, they learned the sobering truth that their youngest son would need brain surgery.

“Chiari malformations are structural defects in the base of the skull and cerebellum,” Dr. Lober explains.  “In Peyton’s case, it caused fluid to collect in the spinal cord which caused his scoliosis, blinding headaches and can lead to problems with reflexes, swallowing, balance and sleep apnea.”

According to Kasie, her son who can easily be described as the family’s comedian, became so quiet it was eerie as Dr. Lober described the surgery. “I was confused at first because Dr. Lober was using a lot of medical lingo that I didn’t understand, but then when he turned to me and said brain surgery I was like ‘wow’ in my head,” Peyton shares. “I thought it was a dream instead of reality.”

Peyton’s first surgery was in November 2017. “Dr. Lober removed the lower back portion of his skull and lifted the back of the brain up to reduce the fluid build-up in his spinal cord, which was causing his symptoms. His surgery was the worst five hours of my life…that was until his recovery.”

Kasie describes the pain Peyton was in as ‘heartbreaking.’ “It took a bit to figure out what pain medications would work best for him. He was vomiting and he had to be in a dark, quiet room. The only thing that helped was a cold rag on his forehead. One of our nurses stayed hours over her shift because she was worried about him.”

“It felt like someone was taking the sides of my head and squeezing it as hard as they can,” says Peyton. “And I kept vomiting, which was giving me headaches.” 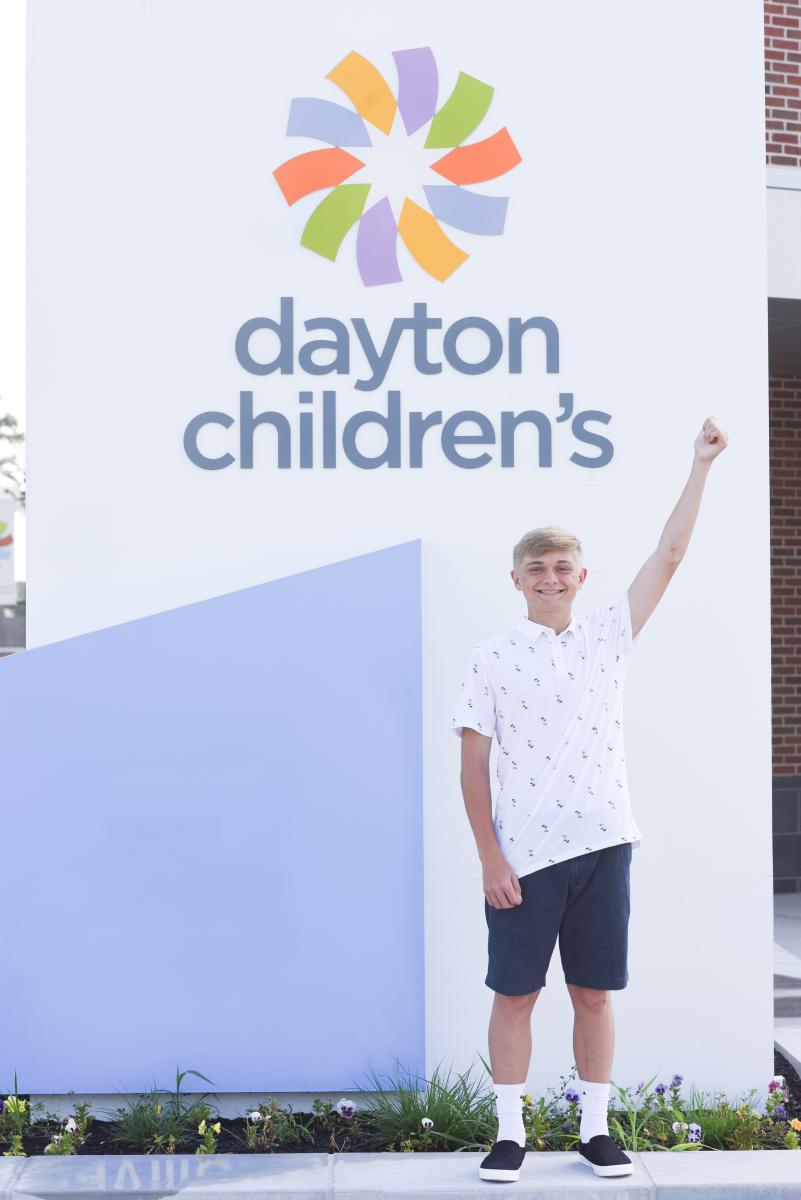 Peyton was cleared to go home after five days inpatient at Dayton Children’s. However, his time at home was short lived. Two days later he woke up at 3:00 am screaming in pain and Dr. Lober met Peyton and his parents in the emergency department.

Peyton was admitted overnight until the pain subsided and for a while, he continued to heal and life seemed to resume as normal for the Taylors until they were blindsided in a way that would shake them to the core.

“During one of his checkups with Dr. Lober, we learned that he most likely had a reaction to the graft we used during his first surgery,” Kasie said. “And the real kicker is that it was worse than before he had the surgery. Dr. Lober believed that scar tissue formed around the graft causing the fluid to collect again in the spinal cord, but he couldn’t be 100 percent certain until he opened Peyton back up for a second surgery.”

The devastation of a second painful surgery set in.

“Dr. Lober shared that this type of surgery is almost always successful, Peyton’s case was rare,” Kasie explains. “He was working with his colleagues all over the country to plan for Peyton’s second surgery. As Dr. Lober suspected during surgery, there was scar formation that caused fluid to collect in his spinal cord. He used tissue from his neck to seal up the space, which would reduce the fluid back-up in his spinal cord causing the problems.”

The second surgery for Peyton was significantly smoother, part in thanks to knowing the ropes, including what pain medicine Peyton could tolerate. In a matter of days the Taylors were home again.

The true test to see if the surgery worked would come during a 90-minute MRI on a Saturday. “My phone rang during Peyton’s MRI and it was Dr. Lober. ‘Where are you, I asked?’ He had driven in on that Saturday to look at Peyton’s MRI while it was happening. He said he was looking at Peyton’s brain and everything looked perfect. I couldn’t believe he had done that for our family. I had the best news ever to share when Peyton was done with the test. There was a lot of celebrating with our family that night!”

Today, Peyton is healthy and happy, loves computers and public speaking. “You would never know by meeting him of the trauma that he went through.  It’s rare to have a doctor who cares so much about your child and your entire family. Dr. Lober was the glue that held us together; he saved Peyton twice.”