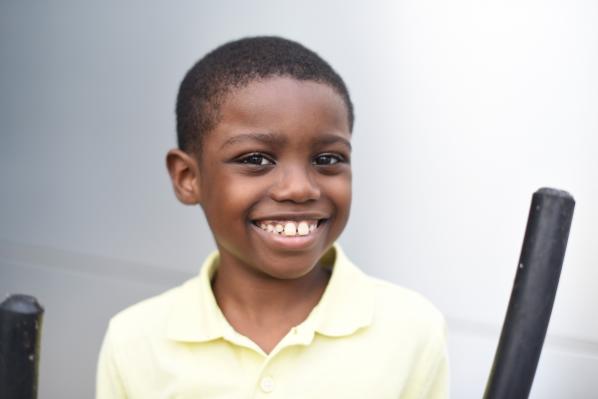 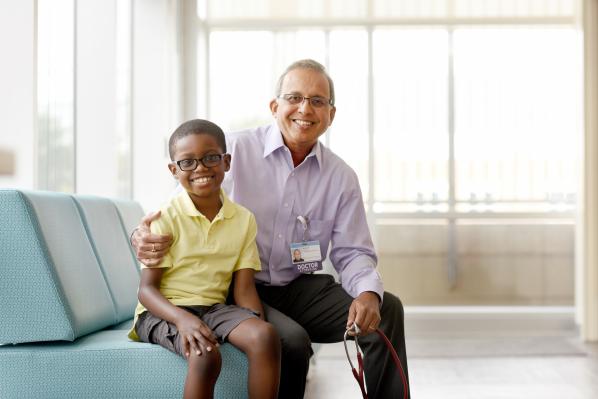 William and his doctor, Dr. Dole

William McCoy III did not have a typical 9th birthday celebration. Instead of having fun at home, he spent his birthday at Dayton Children's emergency department. He contracted a fever, which for a sickle cell patient is a medical emergency.

“The nurses at Dayton Children's know William well and made him feel special for his birthday, despite being sick” said William’s mother Donna McCoy. “They signed a Mario Brothers card and gave him a gift. Mario and Luigi are two of his favorite video game characters, so he was thrilled.”

Given the prevalence of sickle cell disease in African Americans, Donna was tested during pregnancy. The test came back positive for sickle cell trait. This means she is a carrier for sickle cell genetic abnormalities, but does not have the disease itself. “I was very surprised. I’m from a small town in Alabama where there is not a lot of access to healthcare information,” said Donna. “My family had never been tested, so I had no idea that I was a carrier.”

Donna’s husband, William McCoy II, did know he carried sickle cell trait, as he and several family members tested positive years ago. Given the new information that Donna was also a carrier, the couple worried that their baby may be born with sickle cell disease.

When Donna and William’s son was born, their fears were confirmed. He was diagnosed with sickle cell disease at birth. At the time, the family was living in Wyoming where his father was stationed at the Air Force base. The parents sought care for their son at Colorado Children’s, the closest pediatric hospital.

Three years after their son was born, William’s father was medically discharged from the military after experiencing a medical complication known as exertional sickling. His red blood cells changed shape or “sickled”, causing a build-up of red blood cells in small blood vessels, which leads to decreased blood flow. This can be intensified when living in locations with high altitudes.

more than a care team

The family moved to Dayton to be closer to William’s father’s family, as well as live at a lower altitude. A move meant finding new doctors for William. His specialists at Colorado Children’s recommended doctors at several hospitals in Ohio. “We decided to continue William’s care at Dayton Children’s,” said Donna. “The location was convenient and we felt confident in his care team.”

William’s multidisciplinary care team is led under the supervision of Dr. Mukund Dole, pediatric hematologist-oncologist and Medical Director of the West Central Ohio Comprehensive Sickle Cell Center. The center is one of six in the state that is funded by the Ohio Department of Health to provide care for children with sickle cell disease and support for their families.

“Dr. Dole and his team have been more than health care providers, they are an extension of our family,” said Donna. “Dr. Dole is extremely knowledgeable and has been very accommodating in treating my son.”

care beyond the hospital

The sickle cell care team, including nurse Teresa Berter, go the extra mile for their patients by meeting with their school teaching staff to educate them on the special accommodations each child needs. For example, William has to avoid exposure to extreme temperatures.

“William is such a polite and mature young man and really doesn’t let his illness get him down,” said Teresa. “His parents are very invested in William’s care and continue to give back to the community.”

William and his parents were invited by Dayton Children's to speak to Wright State medical students about sickle cell disease and managing care. “Their story was very impactful to the students and really helped to educate them on the nature of sickle cell disease,” said Teresa. “William was so poised in that huge presentation hall – I couldn’t have been prouder of him if I was his Mom!”

Despite the pressures of sickle cell disease and missing a lot of school, William is very academic and excels in his classes. He is a voracious reader, as his mom started reading to him while he was still in the womb. William loves picking out a new book to read from Dayton Children's book cart every time he is at the hospital.

For everything William III has altered in his life to manage his sickle cell disease, it does not limit him. “Dr. Dole encourages us to let William experience life and try new things,” said Donna. “He may have more challenges than other kids, like spending his birthday at the ED, but we never want him to feel limited by his disease.” She added, “He has a bright future ahead of him.”

09/30/21 | news article born with hearts of a champion, living with sickle cell Two siblings with sickle cell disease share their story.
02/03/22 | patient story honoring the legacy of a "one-of-a-kind" physician After her son was cared for by the late Dr. El-Sheikh, Kayela found a way to honor his legacy.