Affecting more than 100,000 children in the United States each year, scoliosis, or the abnormal curvature of the spine, is just one condition that Dayton Children’s is attempting to prevent in young children.

According to the Scoliosis Research Society (SRS), “in more than 85 percent of cases, a specific cause is not known,” giving the experts at Dayton Children’s the incentive to provide children with the right care in hopes of preventing the long lasting, negative effects of scoliosis.

Dayton Children’s, along with the help of Molly Depoorter, a nurse and coordinator in the spine clinic here at Dayton Children’s, recognized that there was a lack of scoliosis awareness and screenings in the Dayton area, especially in the public schools.

“Due to budget cuts in school funding, school nurses were and have been unable to take the time needed to perform the proper scoliosis screenings,” says Depoorter. “This left many children in the greater Dayton region without the proper care needed to prevent the onset of scoliosis.”

In December of last year, Depoorter began contacting local schools to inquire about starting a program in which she, along with several other nurses from the spine clinic, would travel to schools in the greater Dayton area to perform scoliosis screenings free of charge.

There are certain warning signs that your doctor will look for if suspected of having scoliosis. They are:

To date, Depoorter has screened over 4,000 backs, with nearly 400 meeting the referral requirements.

According to Depoorter, “I’ve gotten a lot of positive feedback from the nurses. Now, instead of reaching out to them, I’m getting several phone calls a day asking if I can do a screening at their school. It’s great. I’m loving all of the positive responses.”

Although the program primarily targets sixth graders, Depoorter says she does perform screenings on seventh and eighth graders. However, depending on the situation, Molly does screen some fifth graders, focusing on fifth grade girls who traditionally, are more prone to developing scoliosis, especially between the ages of 3 and 10.

When a child does meet the requirement and are cleared for surgery they will be treated by the Orthopedics team at Dayton Children’s.

“My partner Jim Lehner, MD, and I have over 50 years of combined experience in treating children with scoliosis and performing other spinal surgeries,” says Michael Albert, MD, orthopedics physician at Dayton Children’s.

Dayton Children’s performs the majority of the spine surgeries done in the entire 20-county region in a year. This level of experience is not available at any other facility in those 20 counties.

That degree of expertise is essential when looking at a complicated surgery that typically lasts from four to six hours. Scoliosis surgery is a spinal fusion that involves pins and screws and placing metal rods in the child’s back. Because the spine is three-dimensional, the surgeon needs to consider the placement of this “hardware” very carefully to ensure the best outcome. Drs. Albert and Lehner, like the other orthopedic doctors at Dayton Children’s, are board certified and fellowship trained in pediatric orthopedics.

This extra training, experience and clinical expertise can only be found in a hospital dedicated to caring for infants, children and teens. Dayton Children’s is proud to bring this expertise to its 20-county region.

Since August of this year, Depoorter has already done screenings at 15 schools. She says she is looking forward to surpassing the number of backs she saw last year, “I love this program and getting an early jump on things is putting me one step closer to my goal of preventing these kids from needing surgery and getting them the care they need.”

In 90 percent of cases, curves are mild and do not require active treatment, but should be monitored for change. If you suspect your child has scoliosis, please contact your pediatrician. 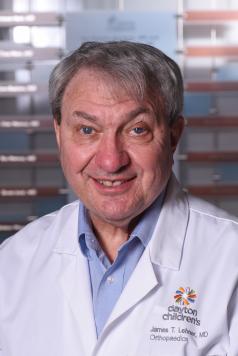