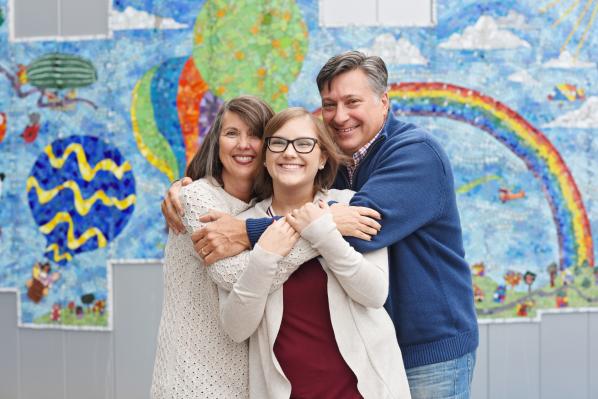 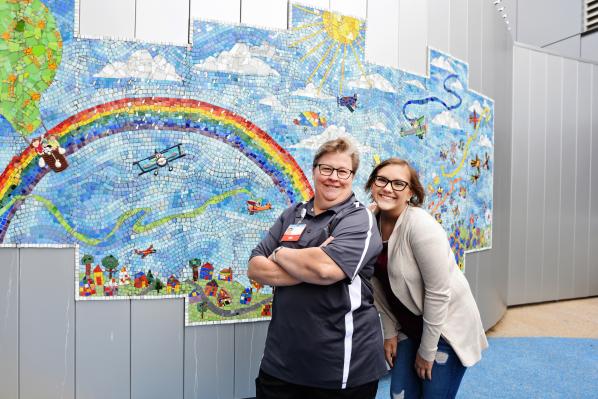 Sarah pictured with Bev Farris, RN, her favorite nurse when she was inpatient at Dayton Children's.

a long road to remission 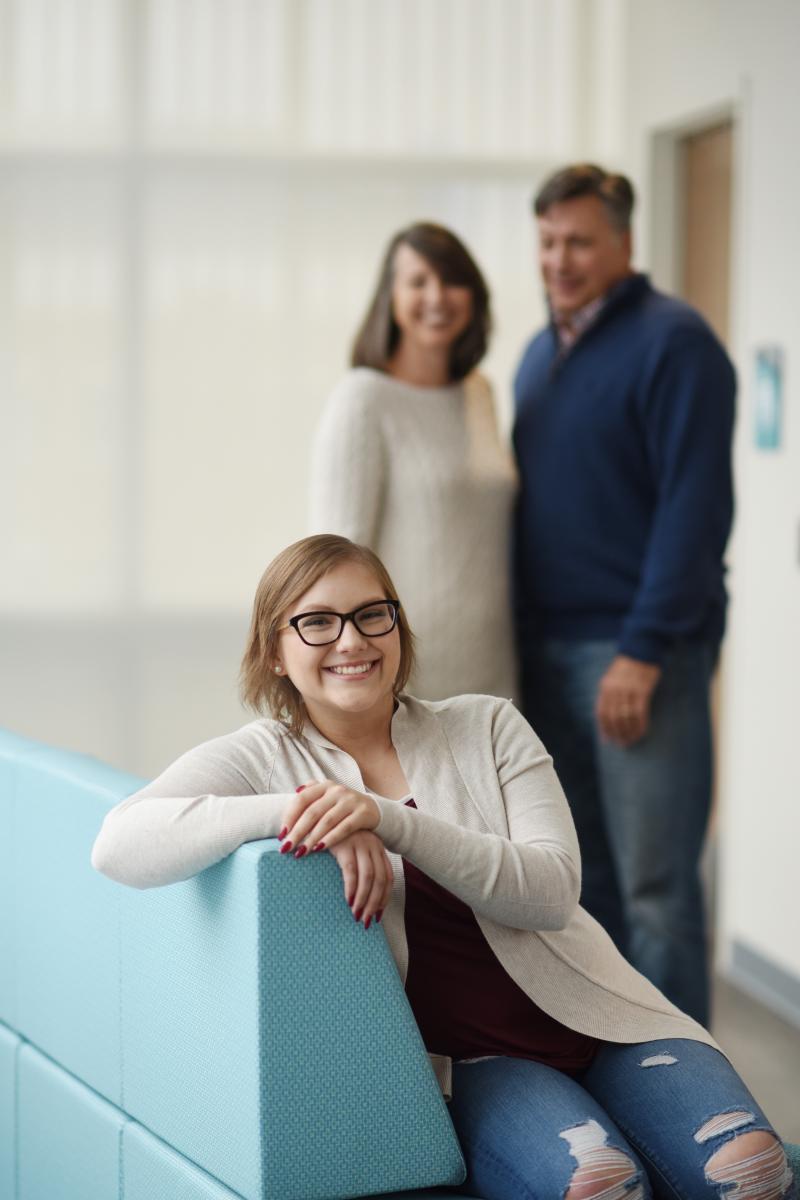 Many words can be used to describe people who are going through cancer therapy. Words like tired. Nauseated. Scared. Sarah Krizner was all of those things, but in the words of her mom, Cathy, she was one more: Brave.

It was Sarah herself who discovered the lump in her neck, on the last day of a family vacation in Florida in March 2015. Cathy was immediately concerned. Worrisome ultrasound results back in Dayton led to a next-day appointment with Mukund Dole, MD, a pediatric oncologist at Dayton Children’s. Dr. Dole diagnosed Sarah with II-A Hodgkin lymphoma after a biopsy confirmed the presence of cancer cells in two lymph nodes. Sarah was only 12 years old.

When her parents broke the news to her, Sarah remembers thinking the worst—that she was going to die. But Dr. Dole believed her initial prognosis was good. The course of care would include four rounds of chemotherapy over 16 weeks, and Dr. Dole was optimistic that life would be back to normal by October.

But cancer sometimes has a way of surprising even the most experienced doctors. Soon after her final chemotherapy infusion in July, Sarah was inexplicably anxious.

“We had a check-up in about a week’s time, but I called Dr. Dole to tell him that Sarah was convinced the cancer hadn’t gone away,” says Scott, her dad. “He said, ‘that’s good enough for me, bring her in today.’

Tests confirmed that the cancer had spread to more lymph nodes throughout her torso. It was awful—worse than finding out she had cancer in the first place. It was such a helpless feeling as her father... a daddy is supposed to protect his little girl, and there was nothing I could do.”

Sarah’s cancer was now considered to be persistent IV-A Hodgkin lymphoma. Her survival would depend on a successful autologous stem cell transplant. Sarah's physcian's at Dayton Children's connected her with the team at Cincinnati Children’s Hospital Medical Center for this procedure. In 2018, Dayton Children’s will begin offering autologous stem cell transplants, so that patients like Sarah can receive this advanced therapy closer to home.

Preparation involved three inpatient rounds of chemotherapy at Dayton Children’s, followed by a stem cell harvest in mid-December. Through it all, Sarah tried to live her life, spending time with friends and earning straight A’s. When her hair fell out (twice), she simply soldiered on, with no thought of wearing a hat or wig. During inpatient stays and visits to the clinic at Dayton Children’s, care team members did their best to keep her spirits up. One favorite memory is of the day Dr. Dole and fellow pediatric oncologist Jordan Wright, MD, danced into her clinic infusion room wearing sombreros and shaking maracas, for no other reason than to make her smile.

Everything was on target for the transplant to happen on January 11, 2016, until a positron emission tomography scan revealed that too much cancer remained in Sarah’s body for the transplant to proceed. Finally, after four more rounds of chemo using powerful doses of gemcitabine and brentuximab, Sarah was admitted to Cincinnati Children’s for the transplant, which took place on March 18. It would be another two weeks before doctors would know whether the cells had engrafted.

Meanwhile, Sarah suffered severe effects from her final round of chemotherapy. “It seemed like the chemo was burning her from the inside out,” says Scott. “Sarah’s skin was extremely itchy, she had blistering on her elbows and heels, and the lining of her mouth just sloughed off. She couldn’t take anything by mouth, and she had horrible nausea and diarrhea. Thankfully, she really doesn’t remember most of it—but it was very difficult for us to see her endure those effects.”

Through these long, stressful days in the hospital, the Krizners relied on the support of family and friends, and their church home in Vandalia. Although Sarah could have only a few visitors, she received hundreds of cards, which Scott strung up to brighten her hospital room. “So many people from all over the country were praying for Sarah, and we felt that support,” says Cathy. Scott adds, “We reminded ourselves over and over that children are a gift from God, and we had to be willing to let her go.”

Finally, after days of uncertainty, Easter Sunday brought good news. Sarah’s absolute neutrophil count, barely measurable five days earlier, had climbed to above 1,700—a strong indication that engraftment was taking place. By the end of the day, Sarah was able to walk the halls for the first time in weeks. The effects of chemo would continue to take their toll over the next several days, but Sarah had turned the corner. Almost one month to the day after being admitted to Cincinnati Children’s, Sarah returned home.

“It felt weird being home after all that time, and I remember just wanting life to be normal again,” Sarah remembers. “My class trip to Washington, DC, was a month away, and I really wanted to go. Dr. Dole said it would be okay, and he even pushed back my follow-up radiation therapy so I could make it.”

After three weeks of radiation therapy that summer, she started maintenance treatment with a new targeted agent called Brentuximab, specifically developed for treatment of Hodgkin’s lymphoma. She continued this therapy for one year post stem cell transplant.

“I think when school started, I finally felt more like myself,” Sarah says. “Looking back, if I could give advice to other kids going through cancer treatment, I’d tell them to try really hard not to overthink it. Count on your friends and family to get you through. And also you might want to find your favorite artist, because sometimes all you are going to feel like doing is listen to music.”

Sarah’s last maintenance chemo infusion was in September 2017, and she is officially in remission. Now in the 10th grade, she continues to excel in school, serve on the yearbook team and play piano. “One thing I told Sarah when she was sick that I also told myself is try to be strong and set a good example for other kids who may get cancer,” Cathy says.

“I will never forget the first day she walked onto the school bus with a bald head—I had tears in my eyes, but she never faltered. She really was brave throughout the whole experience, and inspired a lot of people.”