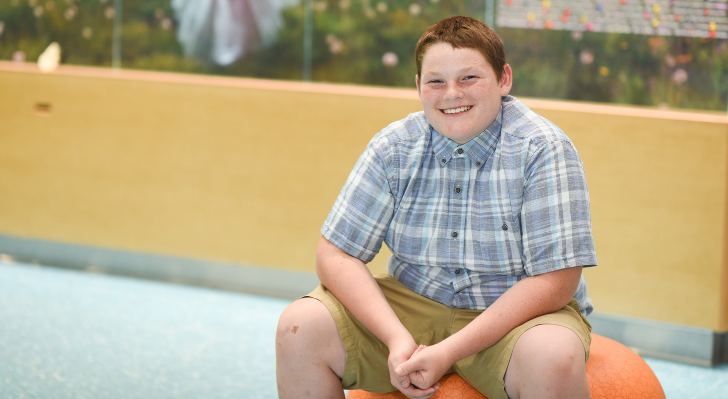 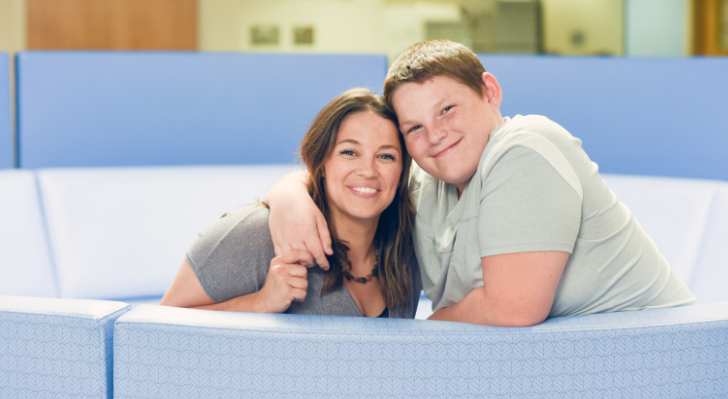 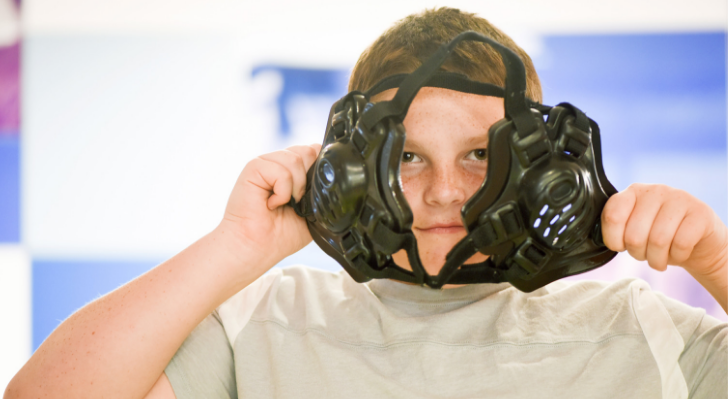 Immune to the smell of the sweaty wrestling mat, Gabe approached his opponent with a clear and focused mind ready to give the match before him his all. As he pinned the other wrestler and the referee declared the winner, Gabe’s heart was racing and his body shaking.

In many ways, it was a feeling unlike any other Gabe had experienced.

And yet, by no means was this the hardest fight of Gabe’s life or the biggest battle won.

But look no farther than the six “beads of courage” necklaces Gabe proudly shows off and you’ll see a better picture of Gabe’s actual greatest fight. Every bead on the necklaces represent part of his treatment… every chemo… every transfusion… every poke... dozens of beads showing Gabe’s courage as he fought acute lymphoblastic leukemia. 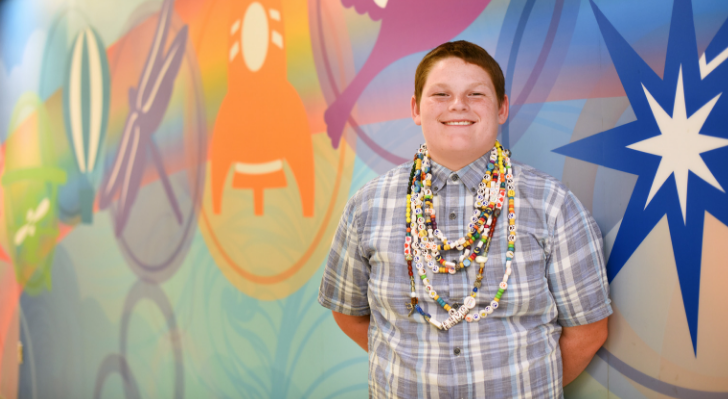 It’s been seven years since Gabe’s parents, Adrienne and Jason, heard the words “your son has cancer.” But the emotions tied to that news are just as fresh as the day they heard it.

For months leading up to the diagnosis, 7-year-old Gabe had been having issues with pain in his arm to the point where he couldn’t even lift it. Blood tests and X-Rays were inconclusive and Gabe’s arm was treated with a cast as if he had a minor fracture. But two weeks after having the cast removed, the pain returned… this time in his other arm.

Gabe was referred to a pediatric rheumatologist in Cincinnati, but when his legs and hands swelled up and he couldn’t walk, Adrienne and Jason knew they couldn’t wait the two months it would take for an appointment. They immediately took him to the emergency department and had Gabe admitted. Many possible diagnoses were thrown around… lyme disease… lupis… juvenile arthritis… but cancer was a far off possibility.

“The rheumatologist said that his symptoms weren’t consistent with juvenile arthritis so they finally decided to do a bone scan,” remembers Jason. “The doctor looked at me and said ‘I will be shocked if this is cancer.’”

When the results came back it showed that 97% of Gabe’s bone marrow included leukemic blasts.

“As much as Jason said he sensed it, I absolutely didn’t,” says Adrienne. “I never thought cancer.”

The doctors in Cincinnati gave the Duplechian’s the option of being admitted or transferring them back to Dayton Children’s.

“We told them ‘thank you for figuring this out, but Dayton is home,” remembers Adrienne.

The next morning Gabe was immediately admitted to the hematology/oncology floor at Dayton Children’s to begin what would be a three and a half year journey of treatments.

“I remember being really scared about losing my hair,” says Gabe. “I also remember all of the IVs I had to get. Those were the worst part.”

Gabe spent his first Halloween after diagnosis in the hospital and what happened that holiday was scarier for Jason and Adrienne than the scariest haunted house or horror movie.

“We went from a crappy day in the hospital to our worst nightmare,” says Jason.

Gabe’s skin and eyes were an eerie shade of yellow and it wasn’t a Halloween costume. It was an outward sign that his liver was failing inside his body. Gabe’s oncologist, Mukund Dole, MD, told the family about a drug that might help, but it was not yet approved by the FDA and was still in the clinical trial stage. Gabe would have to be transferred to Cincinnati Children’s to participate in the trial, but it was his only hope. 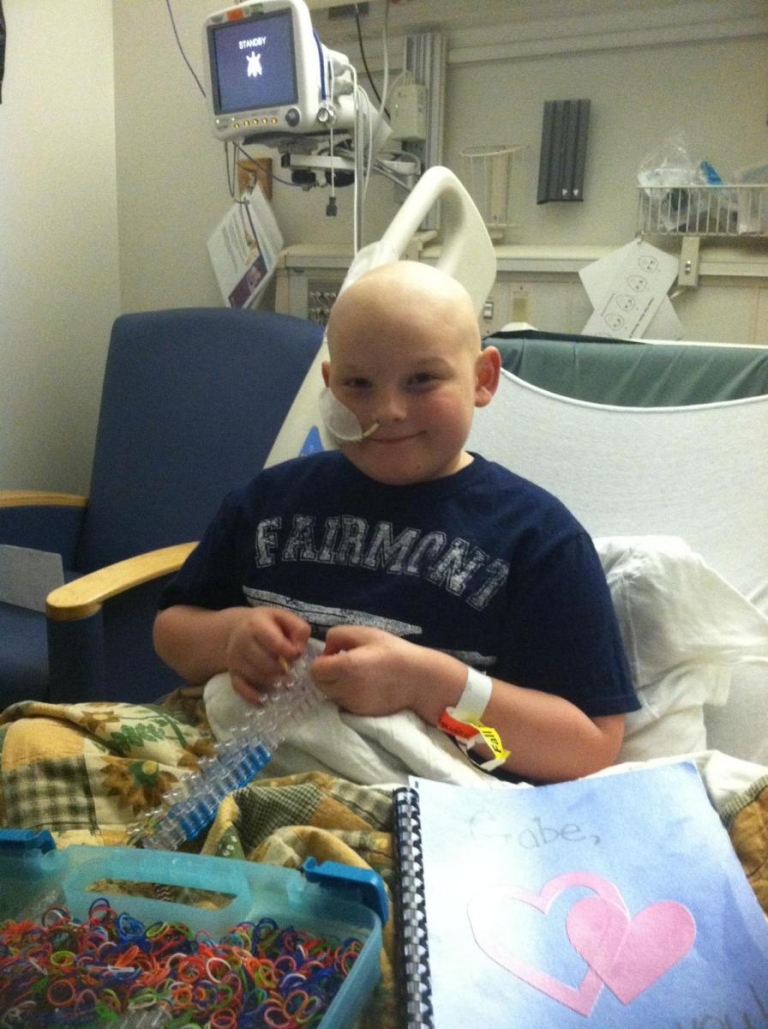 “Even though there were a lot of unknowns with this drug, Dr. Dole told us we should do it and we fully trusted him,” said Jason. “Even when we were in Cincinnati we could call him any time of day for support. He always took the time to explain everything to us in great detail.”

It took over a week before Gabe’s body was even strong enough to begin the clinical trial and once he did, he spent 30 days in isolation as the medicine worked through his body.

Today, the drug Gabe was part of trialing, Defibotide, has been approved by the FDA and more people are benefiting from it because patients like Gabe were willing to test it. Now that it is approved, any future Dayton Children’s patients that would need it would be able to stay here to receive this life-saving medicine.

“To find out I was helping people at the same time that I was getting helped is really cool,” says Gabe. “It’s awesome to know that I’m helping people today by something I did in the past.”

Hearing Gabe reflect back on how he helped others makes his parents proud. But they aren’t surprised. Gabe has always been a kind-hearted and generous kid… something they say sets him apart from other kids.

“This experience has been a character-building experience for Gabe. It’s not too often that kids teach you about strength, but Gabe has,” says Jason as Adrienne nods along with a smile across her face.

“Gabe has gone through a lot without complaining,” says Dr. Dole. “He is always cheerful and maintains a positive attitude hoping for the best.  He was always a charmer who was loved by all the staff and his nurses.” 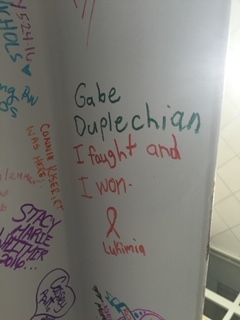 All in all, Gabe underwent intensive chemotherapy for eight to nine months followed by low-dose complete a total of three years of chemotherapy for his leukemia. Today, Gabe is now in remission and considered cured. He still goes back to see Dr. Dole every four to six months for blood work and a checkup but otherwise he’s living the life of a normal teenage boy.

Today, kids with cancer are treated in Dayton Children’s new patient tower, and while Gabe’s treatment all took place in the old unit, a piece of Gabe exists to look over current patients in the new space.

In 2016 Gabe had the chance to sign the final beam that would be placed into the tower during its construction. Along with his name and an orange ribbon for leukemia he wrote four powerful words…

Vanessa's motto is simple: Accept everyone because we're all different! CF is just one thing that makes her special.