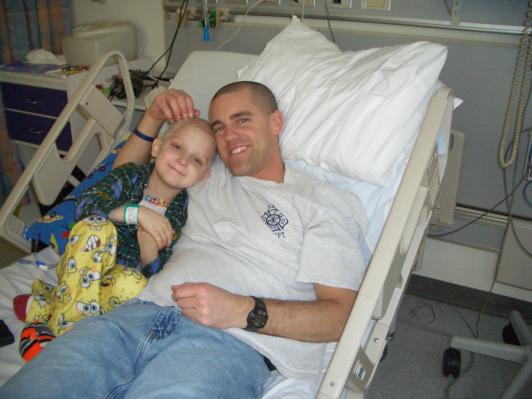 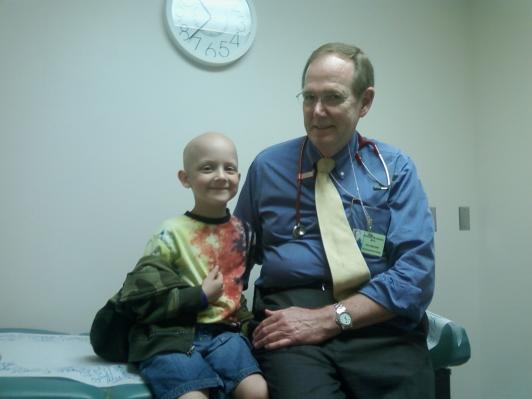 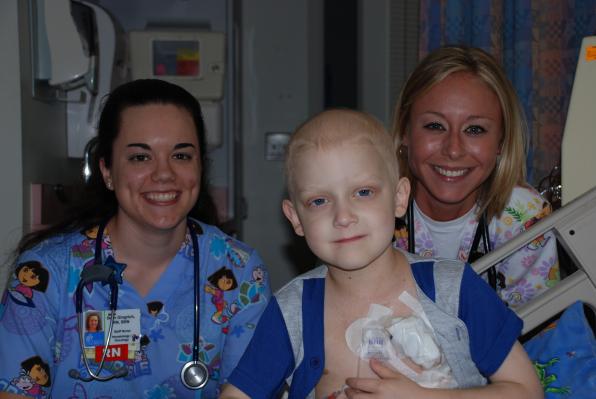 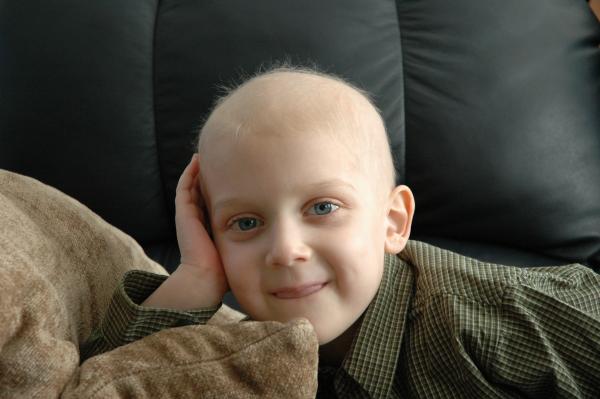 a community comes together for Team Gavin 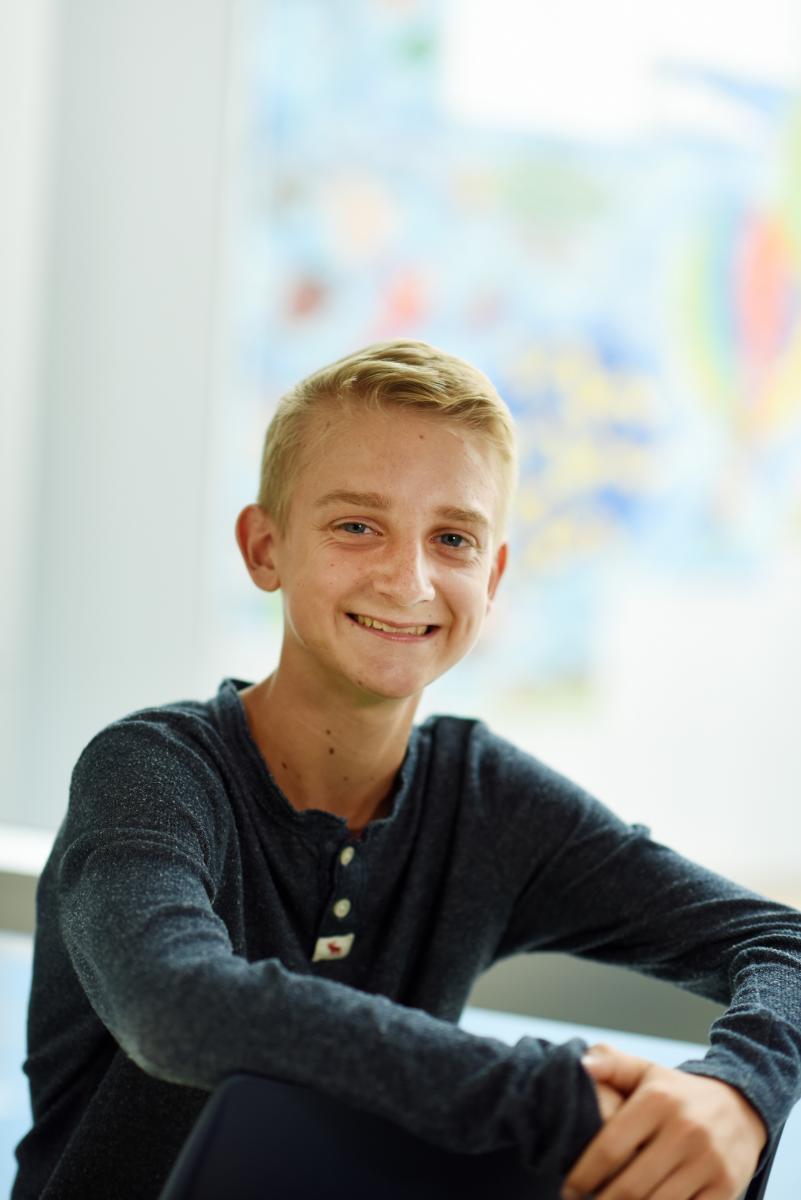 This is a story about how love made a difference in a family’s darkest hours. How doctors and nurses… parents, siblings and grandparents…teachers, firefighters and disc jockeys all came together to help when one little boy was fighting a terrible disease. And how that little boy, who barely remembers being sick, is hoping to inspire other kids who have cancer to never give up hope.

The story began in early 2007, when Gavin Lucas was just 5 years old. His mom, Kelly, noticed a little lump on the back of his neck and mentioned it to Gavin’s pediatrician, who referred them to a surgeon at Dayton Children’s. The surgeon removed the lump and sent a tissue sample to the lab for testing, just to be sure it wasn’t cancer.

But the tissue was cancerous—Ewing’s sarcoma, to be exact. And although the cancer hadn’t spread to other parts of Gavin’s body, the treatment plan was aggressive, involving 14 rounds of chemotherapy over 29 weeks. The first week of treatment was the most difficult for everyone. “The first time he got chemotherapy, he cried and screamed,” says Kelly. “And then two days later, his hair started falling out. It was so difficult to see him go from being healthy to being so sick.”

Each round of chemo involved a hospital stay of about five days, followed by a week at home before returning to the hospital for more chemo. The chemotherapy drugs caused dramatic side effects that included severe constipation, bone pain, mouth sores, frequent nosebleeds and vomiting.

Kelly and Gavin’s dad, Sean, spent as much time as they could at Dayton Children’s during Gavin’s inpatient stays, “tag teaming” so that someone could be home with their three other children, ages four to 10. All four of Gavin’s grandparents visited frequently, as did his aunts and uncles, siblings, cousins and family friends. Inspired by the support and eager to use his family’s experience for good, Sean created “Team Gavin,” with the goal of raising money for Dayton Children’s, Children’s Miracle Network and other organizations.

“I just can’t stand seeing any child suffer, and I wanted our community to do more for kids with cancer,” Sean says. “We held a pub night, concerts, and a video game tournament at the Nutter Center, events like that. I have friends who are DJs, and they’d blow it up on the radio to promote ticket sales. We had people calling us to see how they could help Gavin, and we ended up having to turn people down who offered to bring food or clean our house. We just couldn’t use all the help!”

Support from all over

Meanwhile, Gavin’s cancer treatment continued, and his positive attitude inspired those around him. Nurses at Dayton Children’s put him in the same room for every hospital stay, knowing he liked the view from its two big windows. One day, firefighters from Sean’s company set up their ladder truck outside, turned on all the lights, and extended the ladder to its highest position to salute Gavin. Those same firefighters and others filled in for Sean when he needed to be with his son instead of at work. Kelly, a schoolteacher for Northmont City Schools, had a similar experience. One parent volunteer became a substitute teacher so that she could be on call just for Kelly, and Kelly’s student teacher also filled in as needed.

Gavin’s last chemo treatment was in August 2007, and the care team threw a celebration to mark the occasion, complete with cake and a “room for rent” sign on his hospital room door. Gavin began Kindergarten that fall, and a few months later he and Sean took part in the K99.1 Cares for Kids Radiothon benefiting Dayton Children’s. The radiothon, held at the hospital every year, highlights patient experiences with “story songs." Since that first year, Gavin and Sean have participated in several Cares for Kids Radiothons. Gavin makes a live appeal on the radio, encouraging people to donate so that other kids have the resources they need during treatment. Sean adds his own “shout out” to Team Gavin supporters, which always results in a bump in donations to the Radiothon.

Now nine years cancer free, Gavin returns to the hospital’s long-term cancer follow-up clinic annually. There, the care team checks for any signs of cancer recurrence or late effects from his treatment, which can include growth issues and damage to his heart. “I’m not going to worry about what might happen or change how I think or do things just because I had cancer,” says Gavin, who plays soccer and tennis for Northmont. “But at the same time, I want to be somebody who can encourage other kids who have cancer. One thing I’d really like to do is visit patients in the hospital’s new cancer center, to show them that there is hope.”

Although Gavin has very few memories of his cancer experience, he makes a point of taking part in the Relay for Life at Northmont High School every year. This fundraiser for the American Cancer Society includes a “survivors lap,” and the first time Gavin participated, he sprinted around the track. As he crossed the finish line, he threw his arms up in the air and yelled, “I won!” And so he has.