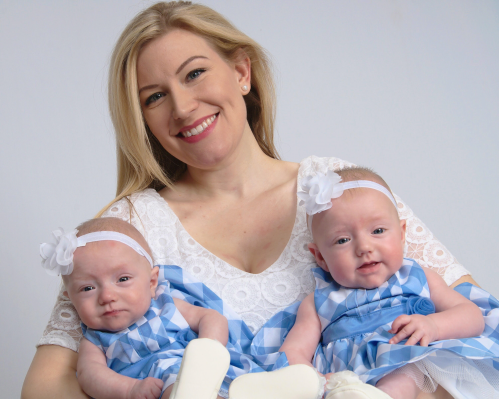 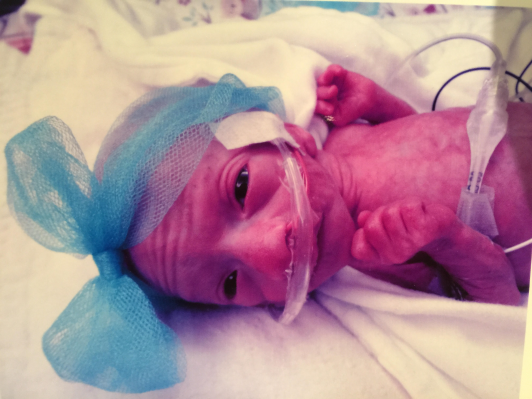 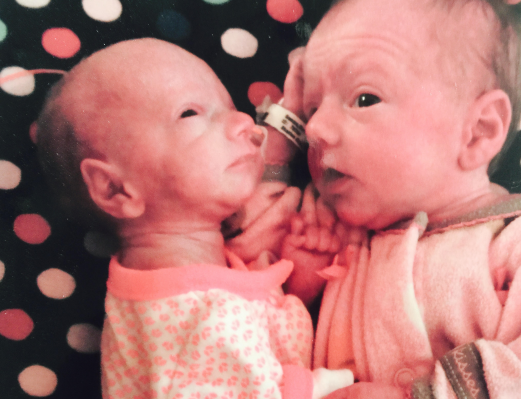 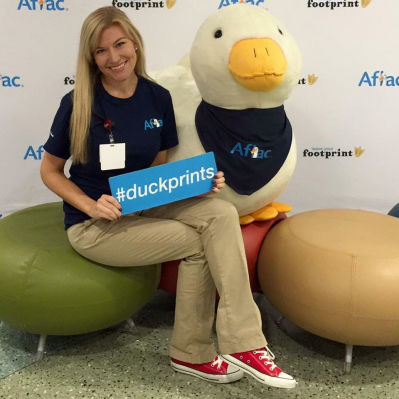 Kelly during her time as a volunteer at Dayton Children's 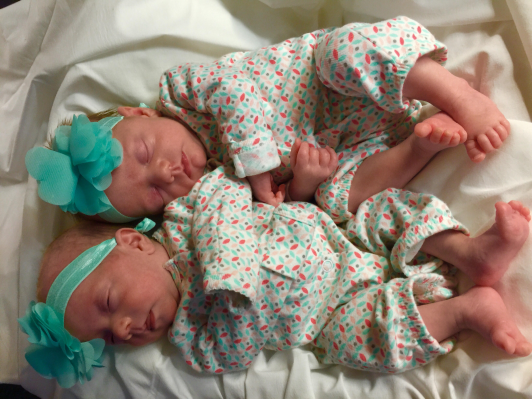 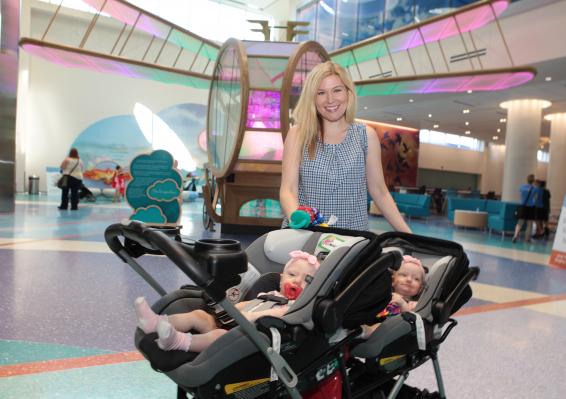 from caregiver to cared for

Most women find the nine months of their pregnancy to be a joyful time. A time of decorating nurseries, finding out genders, picking names and attending baby showers. But for Kelly and Jeffrey Kempton, their pregnancy was spent on pins and needles rather than cloud nine.

“I canceled my baby shower and gender reveal,” shares Kelly. “I couldn’t bring myself to set up a room for twins not knowing if I would be bringing two babies home, one baby home or no babies home.”

A year prior to getting pregnant, Kelly began volunteering at Dayton Children’s. Her first job was taking discharge photos in the newborn intensive care unit. She then transitioned to working the front desk and greeting visitors. All this time never knowing that someday she would be one of those visitors and one of those NICU families praying to get discharged.

In February 2016 Kelly and Jeffrey went in for a five-week ultrasound. Just like they thought, they were pregnant! But surprisingly with twins. However, the doctor shared that “baby B” was a vanishing twin, an unviable embryo, and that they should not expect to see this baby during their next ultrasound.

But with each passing doctor appointment and ultrasound, baby B kept making her appearance. Each time the doctors told the expectant parents to not expect to see her during the next one. If she didn’t just vanish on her own, Kelly would miscarry this twin because she was so much smaller than the other one.

But baby B was stubborn and at the 24-week ultrasound, she was still there. However this time, the doctors had some grave news.

“Week 24-28 were the hardest four weeks of my life,” shared Kelly through tearful words. “They told us that if baby B went into distress, we would have to make a choice. Do we allow her to die and buy a few weeks more for baby A, or do we intervene and potentially lose them both? They told us they could deliver during these four weeks, but it is likely that baby B would not make it and she might take her sister with her.”

Four weeks felt like an eternity as they waited to see what baby B would do. But as they rounded the corner on week 28, baby A and B surprised everyone.

“The doctors looked at me and said, ‘Ok, now we have a real shot here. We believe we can save them both.’”

But three short weeks later, on September 13, baby B stopped moving and Kelly had to be rushed into an emergency C section.

“They told me to not expect to hear them cry, but part of me was still hopeful,” shared an optimistic Kelly. “They were making the faces of crying but there was nothing coming out. It was heart wrenching.”

Both girls were transferred to the NICU at Miami Valley Hospital. Kelly and Jeffrey finally felt like they could choose names for the twins. Baby A was given the name Elizabeth and baby B, Charlotte.

But the pins and needles that plagued their pregnancy weren’t over. Elizabeth weighed only 3 lbs 4 oz and Charlotte a mere 1 lb 10 oz. They still had a long way to go for recovery.

On October 20, Elizabeth was able to go home. Now the Kempton family began to adjust to life with a newborn at home and one still in the hospital.

However, just like through the pregnancy, Charlotte wasn’t done throwing curve balls to her parents. Three days before Charlotte was scheduled to go home, Kelly noticed a small lump on her neck. Thinking it was simply a swollen lymph node, the care team did not seem to be worried about it and so Kelly felt comforted. But by day three, a mother’s intuition kicked in even more as she noticed the lump was bigger, harder and redder. Something wasn’t right.

The doctors now believed it to be an abscess that needed to be drained, a procedure that could only be done at Dayton Children’s by trained pediatric specialists and surgeons. Within 45 minutes of diagnosis, Charlotte was loaded into the mobile intensive care unit and began her transfer to Dayton Children’s.

“I can’t tell you how many times I sat at the front desk as a volunteer, and watched babies be wheeled up to the NICU in the mobile incubator. I never thought I’d be the mother of one of those babies. It’s different when you’re the parent. It really hits home what is happening.”

From the moment she entered the doors at Dayton Children’s, Kelly was surrounded by love and support from her volunteer family. When Kelly and Jeff had to go home at night or had to leave to care for Elizabeth, they knew that Charlotte was in good hands. Not just with the nurses and doctors, but also with the volunteers. They knew Charlotte would never cry without having someone to comfort her. There would always be a volunteer there to rock her and provide a calming touch.

Charlotte was given an x-ray and it was found that the abscess didn’t need to be drained but rather treated with an antibiotic. She was monitored by the NICU staff, Dr. Ravi Elluru, medical director of ENT,  and Dr. Gogi Kumar, medical director of neurology.Two weeks later, on November 17, Kelly’s original due date, Charlotte got to join her sister at home.

Today Charlotte and Elizabeth are seven months old. Charlotte, at barely 10 lbs and still in newborn clothing,  is still tiny compared to her sister. But both girls are doing well and recently had their last appointment in the newborn follow up clinic at Dayton Children’s being sent off with a clean bill of health.

“Having been a volunteer and seeing the patients and families and then BECOMING one of the families is a very bittersweet experience. You know you are going to be taken care of because YOU were doing the caring before. You know what to expect and that the volunteers and staff are going to respond and be helpful and comforting. But to experience it as a family member… it really speaks to the fact that the volunteers and staff really believe in the mission of Dayton Children’s. To be on both sides of that was an amazing experience. ”

April 23-29 is National Volunteer Appreciation Week. Volunteers help transform care everyday at Dayton Children’s. To become a volunteer visit childrensdayton.org. You can also make a gift to the new patient tower in honor of our very special volunteers.