a positive outlook after trauma 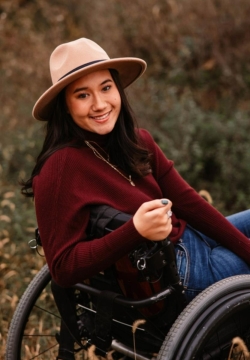 On June 4, 2020, Kristine received a call every parent fears. Her daughter Asjah, 17, had been in an ATV (all-terrain vehicle) accident. Asjah’s friends were already in the process of transporting her to the nearest emergency department when they called Kristine.

The severity of Asjah’s injury wasn’t known until she got to the hospital. She was unable to move from her chest down. In the blink of an eye, Asjah went from being an active triathlete teenager to a quadriplegic. An injury this severe needed high-level trauma care at a pediatric hospital, so Asjah was transferred to Dayton Children’s Hospital.

Upon arriving at Dayton Children’s, Asjah was met by the neurosurgery team who immediately took her into the operating room to fuse the back of her spinal cord.

“Before she went back to the operating room, I kept asking her surgeon if she would ever walk again,” said Kristine. “He told me his number one goal was to get her hands moving again so she could have an independent life. It wasn’t until that moment, that I realized she lost all mobility in her hands.”

Asjah ended up having two surgeries while at Dayton Children’s. The first to fuse the back of her spinal cord, and then a week later she had another surgery to fuse the front of her spinal cord. Following the operations, Asjah spent 18 days in the pediatric intensive care unit (PICU). The spinal fusions proved to be successful and with extensive therapy, Asjah was expected to regain mobility in her hands. She spent the next five weeks in an inpatient therapy program where she worked endlessly to improve her mobility.

While she continues to make strides with her grip strength, Asjah also navigates new challenges that resulted from her accident.  Aside from being 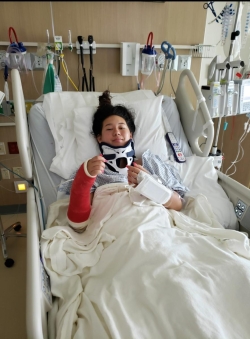 unable to walk and being dependent on a wheelchair, Asjah also has a condition known as neurogenic bladder.

Neurogenic bladder is when a person doesn’t have bladder control because of a spinal cord injury or other nerve issues. Asjah has been using a catheter to empty her bladder since her accident, but because of her limited hand mobility, it was challenging for her to perform the catheterizations by herself. Other than a close family friend, her mom was the only person able to help her. This meant that both Asjah and Kristine had to always remain close to each other. Not an ideal situation for a teenage girl wanting to be with her friends.

Asjah was referred to Christopher Brown, MD, pediatric urologist at Dayton Children’s, shortly after she completed her inpatient therapy. Up until she saw Dr. Brown, Asjah was using a catheter to empty her bladder every four hours through her urethra. During her first appointment, Dr. Brown presented Asjah with an opportunity to have robotic surgery that would create a new way for her to independently empty her bladder.

Dr. Brown made Asjah and Kristine so comfortable. They were able to have open and honest conversations with him about the procedure which ultimately made them both confident in moving forward.

Using a minimally invasive approach, Dr. Brown made a channel from her bladder to her belly button by using her appendix. Often the recovery can be painful, but because of the minimally invasive method used, Asjah’s recovery was much better. For three weeks she had tubes continuously draining her bladder. Once Dr. Brown removed the tubes, Asjah was able to use a catheter by herself through the new channel. Kristine has been so pleased with their experience at Dayton Children’s and with Dr. Brown, that she has referred another family to him for the same procedure.

With her new catheterizable channel in place, Asjah has been able to resume a more independent life. She can empty her bladder independently. She continues to attend therapy three times a week where she is making great progress. Her therapist has been really impressed with Asjah’s improvement and dedication, so they have started to work on walking with leg braces. Asjah was up taking steps on her second try.

Asjah recently got her driver’s license and uses hand controls to operate her car. This gives her the freedom to do more of the things she enjoys, like spending time with friends.

"Love the life you have, but fight for the one you want." - Asjah Lim

when to be concerned about testicle pain

Testicular pain can be a result of several different causes. Learn about one of the most serious causes of testicular pain.