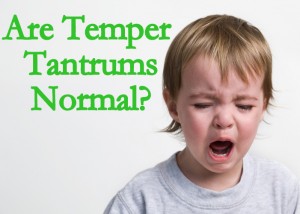 “Is my child’s behavior normal?” is one of the most frequent questions I hear from parents, particularly regarding their preschool kids. Parents seek guidance as to whether some inappropriate behavior is typical or symptomatic of more serious issues requiring professional attention.

Recent research published in the Journal of Child Psychology and Psychiatry helps parents answer that question. The study looks at the frequency and severity of temper tantrums among young children based upon a survey given to the parents of 1500 preschoolers.

Temper tantrums are rather frequent at this age, with 84 percent of parents reporting that their child had one episode per month of such behavior. In most situations, the behavior was predictable. Young children are more likely to misbehave when they are tired, sick, hungry or frustrated. Parents should consider these predictable temper tantrums as normal.

However, 8.6 percent of the kids had daily temper tantrums. Perhaps even more significantly, these behavioral outbursts were different in four clinically significant ways from normal problems. Problematic temper tantrums tended to last more than five minutes, occur with both parents and others, be more intense and aggressive, and appear seemingly randomly without any provocation.

That last factor is particularly important. When I work with families, I ask them to record under what conditions their child misbehaves. It’s an extremely important diagnostic question. If parents can find a pattern or trend to their child’s problems, it gives us both insight and a roadmap to quickly improving the situation. My experience has been similar to what was found by the researchers. Young kids misbehave when tired, hungry, sick, or frustrated.

If a parent tells me there is no pattern to the problem, I know I’m more likely dealing with a significant emotional problem rather than a modest behavior disturbance. The prognosis is more guarded.

Before you seek help for your preschooler’s temper tantrums, do these four things on your own.

If you’ve done the above four steps for three weeks and see no improvement, seek professional help.