home // the hub // news // news and blog // 90 percent chance of getting measles, if you are exposed and unvaccinated

90 percent chance of getting measles, if you are exposed and unvaccinated

Dayton Children’s urges parents to make sure their children are current on their vaccinations, on the heels of a measles outbreak linked to a California amusement park. 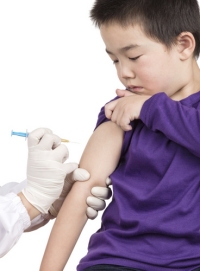 The Centers for Disease Control and Prevention (CDC) now say more than 70 people have come down with the measles so far this year. Most of them were unvaccinated. That follows a record year for measles. During 2014, the CDC reported 644 cases in 27 states, including Ohio - the greatest number of cases in more than a decade.

In 2000, the government declared that measles was “eliminated” from the United States. So why is an eradicated illness making a comeback? Many parents are choosing to forego vaccines over fears they may cause autism. A national immunization survey by the CDC shows that measles vaccinations in Ohio are down about 4 percent from 2000 to 2013.

“The vaccine is highly effective with very little risk of side effects,” says Sherman Alter, MD, medical director of the infectious disease department at Dayton Children’s. “The theory that vaccines cause autism has been disproven many times. Getting the vaccine not only protects your child, but the population as a whole.” Dayton Children’s experts urge parents to talk to their child’s doctor about vaccines and their benefits, potential side effects and the consequences of not getting the shots.

Measles, also called rubeola, is a respiratory infection that's caused by a virus. It causes a total-body skin rash and flu-like symptoms, including a fever, cough and runny nose. At times, the infection can result in severe disease.

“Measles is extremely contagious,” says Dr. Alter. “It spreads when an infected person coughs or sneezes. Those droplets hang in the air so it can spread easily. Ninety percent of unvaccinated people who come in contact with it will catch it.”

Measles is more than just a bad rash, it can kill. Millions of people still get it every year around the world, and hundreds of thousands of children die. “Before the vaccine was developed, measles killed hundreds in the United States every year,” says Dr. Alter. “In addition, it can lead to permanent brain damage and a host of other problems, including inflammation of the heart muscle, inflammation of the brain (encephalitis) or pneumonia.”

It’s very easy for an unvaccinated traveler to pick up the illness and bring it back. The past three years have seen ever increasing numbers of measles outbreaks in the United States, as travel increases and more parents forego their children’s vaccinations. “Thankfully, we have not seen any recent cases of measles at Dayton Children’s,” says Dr. Alter.

when is the vaccine given?

If there is a measles outbreak, or a child will be traveling outside the United States, the vaccine may be given to a child as young as 6 months, followed by the usual MMR immunization at 12-15 months and 4-6 years.

As with all immunization schedules, there are important exceptions and special circumstances. Your doctor will have the most current information regarding recommendations about the measles immunization.

The measles vaccine should not be given to these at-risk groups:

For women who are not pregnant and people not in one of the other at-risk groups mentioned above, the measles vaccine may offer some protection if given within 72 hours of measles exposure.

prevent your child from getting the parechovirus