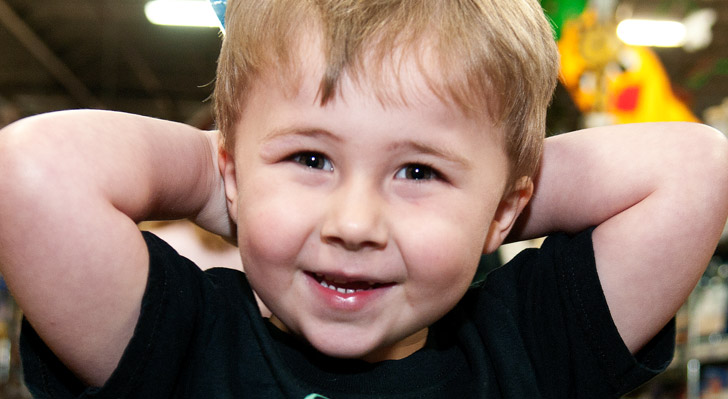 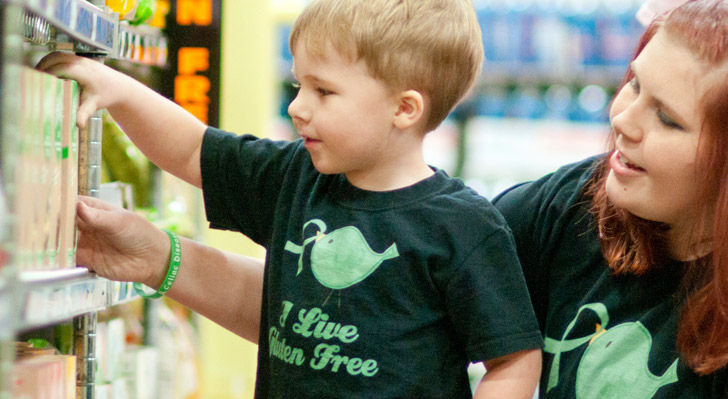 Trevor and his mom

living with an invisible illness

“I was just desperate for information, I imagine every parent is when they’re told their child has a lifelong illness,” says Ashley Stepp, 4-year-old Trevor’s mom. “That’s why I started Trevor’s Facebook page about our celiac journey – to help others from feeling like I did… lost, desperate and starving for information.”

You wouldn’t know that Trevor was hospitalized 16 times by looking at the boisterous 4-year-old donning the ‘I live gluten-free’ t-shirt and racing up and down the aisles of Jungle Jim’s grocery store, famously known as having the largest section of gluten-free food options in the Midwest.

"Trevor is always joking, always laughing, he loves to pull pranks,” shares Ashley. “We always believed it's because his birthday is April Fools’ Day.”

But for kids living with celiac disease, food is no joke, it can mean the difference between life and death.

The first six months of Trevor's life were uneventful for the Stepp family; Trevor laughed, smiled, giggled, rolled over... he nailed every infant milestone. His older sister Kayla doted on him, she protected him fiercely.

"No one could believe how much Trevor smiled," Ashley explained. When Ashley started to introduce solid foods into Trevor's diet, the analogy of the "family dinner" took on a new meaning; the Stepp family would never look at food the same again.

Trevor started to suffer from ear infections. "Lots of kids have ear infections and get tubes, so I wasn’t alarmed at first." Trevor’s ear infections turned into bouts of bronchiolitis, which left him admitted to a nearby children’s hospital at Christmas time. "The best present of my life was Trevor getting out of the hospital the day before Christmas and coming home to his family," Ashley shares.

"He started to get sick all of the time, his stomach was so swollen, I struggled to get the 5-point car seat harness wrapped around his belly, it was like granite," Ashley explains. "He started vomiting multiple times a day and his stool looked like coffee grains. It was horrific. I just wanted to know what was wrong with my baby.”

The questions started to pile up. "At first, doctors thought it was the flu, but every ounce of my being nudged me that something else was wrong,” Ashley shares. “Then words like cystic fibrosis were uttered. I was absolutely terrified."

This went on for months. I took him to doctor after doctor who all told me it was just the flu. In my heart I knew they were wrong.

“I fought so hard with the doctor’s offices, I was so frustrated... even getting kicked out of one of the pediatrician’s offices. Trevor went from being in the 75 percentile for height and weight to the 15th percentile and he stopped talking during that time, it was heartbreaking. Finally I found a doctor who agreed to do a scope.”

Ashley’s mother’s intuition was spot on – it wasn’t the flu, it was celiac disease, a lifelong autoimmune disorder.

About 1 in every 100 people in the United States has celiac disease, an intolerance to gluten. “Gluten” is a protein found in wheat, rye, and barley — grains that are in many everyday foods. Celiac disease is a lifelong, often inherited condition affecting children and adults. When someone with celiac eats food that contains gluten, it creates a toxic reaction that causes damage to the small intestine and doesn’t allow food to be properly absorbed.

Common symptoms of celiac disease are diarrhea, decreased appetite, stomachache and bloating, poor growth and weight loss. Many kids are diagnosed with it when they're between 6 months and 2 years old, which is around the time kids are getting their first taste of gluten in foods.

Because symptoms can be erratic – terrible one week and not so bad the next – many people (including kids) aren’t diagnosed right away.

“By the time they caught that it was celiac disease, Trevor had severe intestinal damage,” Ashley shares. “His villi were completely gone and so is my happy little boy. His personality had done a 180, he seemed angry all of the time.”

Ashley channeled all of her frustrations into finding the right care for Trevor. With advice from her pediatrician, she moved Trevor’s care to Dayton Children’s.

“The small intestine is lined with villi, which are like little fingers that absorb nutrients into the body,” explains Michael Bates, MD, PhD, medical director of gastroenterology. “Anything that causes inflammation of the villi in the small intestine can affect digestion and absorption. In Trevor’s case, his body wasn’t absorbing what he was eating, causing failure to thrive.”

“When people with celiac disease eat gluten, the inflammation blunts the villi, making them unable to effectively absorb nutrients, which is essential for growing properly. Even 1/64th of a teaspoon can cause intestinal damage.”

Trevor was immediately paired with a dietician in gastroenterology because his labs were still showing that he was receiving gluten in his diet.

“Just like a child who is diabetic, diet is the key to success with celiac patients, which is why parental involvement is so important,” explains Dr. Bates. The benefit of being diagnosed at a young age is he won’t remember life prior to being gluten-free, which can help with diet compliance.”

Ashley was connected with Theresa Taylor, RD, LD, registered dietician in gastroenterology at Dayton Children’s. “Theresa put us on the right track to healing Trevor from the inside out,” Ashley explains. “I was so grateful to be armed with a wealth of information on caring for Trevor. We finally were receiving the answers we longed for.”

Once Trevor was gluten-free, Ashley’s happy little boy returned and life for the Stepp’s took on a new normal – being highly vigilant about ingredients and watching every morsel Trevor puts in his mouth. “Internal damage to the villi can be repaired and healed by avoiding gluten,” explains Dr. Bates.

Cross-contamination during food processing is something that’s a concern for the Stepp family. “Trevor has his own cabinet in our house with his own dishes that he uses so we can ensure there are no traces of gluten. Even a bite of gluten can cause intestinal distress so we are diligent about every ounce of food. It’s brought us closer together as a family,” explains Ashley. “Even his big sister participates in meal preparation and has done presentations in class about celiac disease. All of us are actively involved.”

As a parent, Ashley does the opposite of isolating Trevor as a child with celiac, she openly communicates about his condition on social media and has touched thousands of lives in the process.

Several times a year Ashley travels to Lexington, Kentucky, to attend a gluten-free support group. The Stepp’s have also met other families from Tennessee and even as far away as Iowa through Trevor’s celiac Facebook page.

“My goal was to turn a difficult experience for our family into a positive to help other families,” shares Ashley. “Thanks to the care Trevor has received at Dayton Children’s, not only did we find the answers for my little boy’s condition- he’s healthy and thriving - a far contrast to our life two years ago. I know he’s in the best possible hands and with the best possible care team.”

10/16/19 | news article Best Doctors In America® 2019-2020 ranked in the top four percent of doctors in America to earn this prestigious honor
09/07/21 | patient story making music and big decisions Nathan leaned on song writing to help him through one of the biggest decisions he would have to make for his IBD.