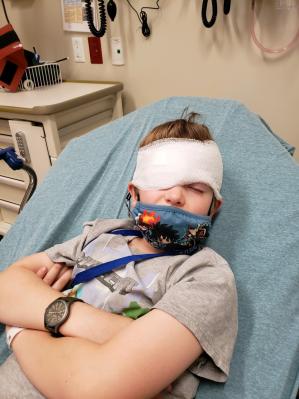 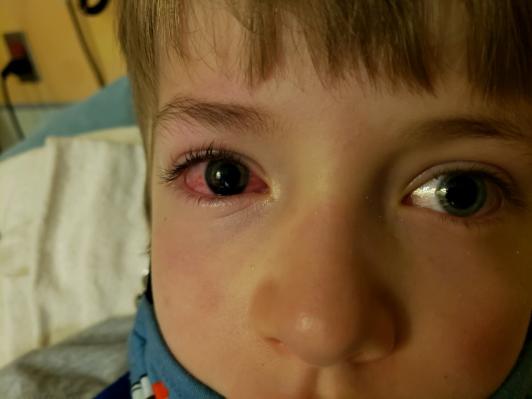 Silas' eye with a hyphema 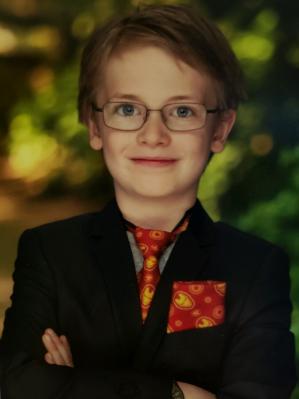 Silas is your typical 9-year-old boy. He loves sports and being active. While at baseball practice in early May, Silas took a baseball to his right eye. The ball hit him so hard that it crushed his glasses and left a baseball stitch imprint on his eye. Mom, Melanie Dalies, rushed to his side and took him home to ice his swollen eye. While icing, Melanie called their primary care physician and while on the phone she described how Slias' normally bright blue eye had turned brown. She was told to go straight to the emergency room.

Melanie drove Silas to Dayton Children's south campus where he was assessed. The emergency room provider explained that Silas had a rare and serious eye condition called hyphema.

A hyphema is an accumulation of blood in the anterior chamber of the eye. This is the space between the cornea (front clear surface of the eye) and iris (colored part of the eye).  About 70% of hyphemas happen in children, especially in males ages 10 to 20. They’re usually caused by blunt injuries from activities, like sports. If not treated right way, a hyphema can cause permanent loss of vision.

Silas was transferred from Dayton Children's south campus to the main campus to be treated by the trauma ophthalmologist, Brenda Young, MD.

" I remember she was waiting for us when we arrived,” said Melanie. “She explained to us the condition and treatment in terms we both understood."

After discharge, Silas was sent home with strict orders to rest. No phone, school or video games, a tall order for an active nine-year-old boy. Silas checked in with Dr. Young every day to make sure the pressures in his eye were decreasing.

"The office staff was always so kind. They always made sure that he had a popsicle before we left. They even made sure it was his favorite flavor and wrapped it in a cup so it wouldn’t drip on him," said Melanie.

Silas was no stranger to eye exams. Previously diagnosed with amblyopia, Silas was reluctant to perform any eye exams due to his history with repeated testing in the past.

"Dr. Young was amazing. She knew just what to say to make Silas comfortable," said Melanie. "She  explained things so well that when Silas' friends visited him, he needed no help explaining to his friends, in nine-year-old terms, his diagnosis treatment and plans for the future."

When at their May 21 office visit, Dr. Young released Silas to return to school and sports and a shocked Silas' response was "so there isn’t any more mirco-hyphema?" Melanie and Dr. Young laughed. 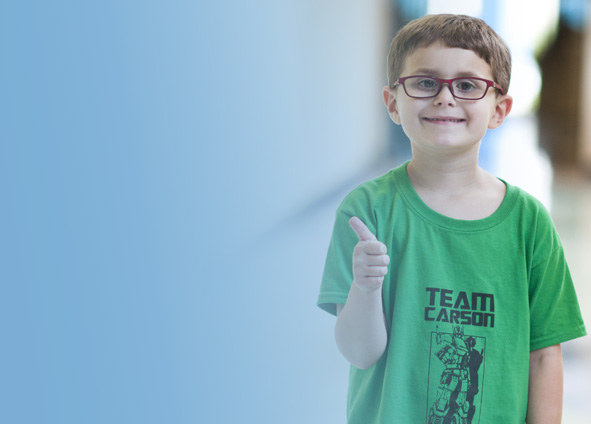 battle against a brain tumor

Carson was diagnosed with a brain cancer that had the ability to spread to other areas of the central nervous system.