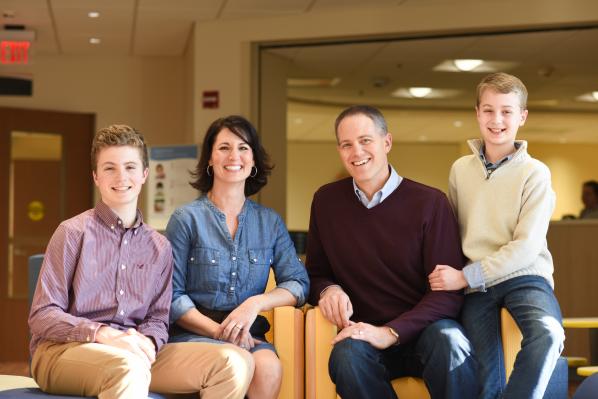 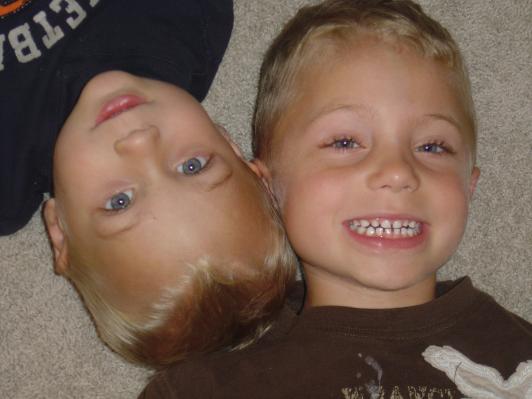 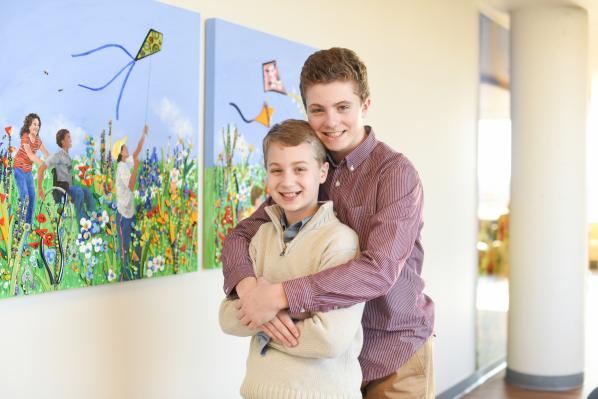 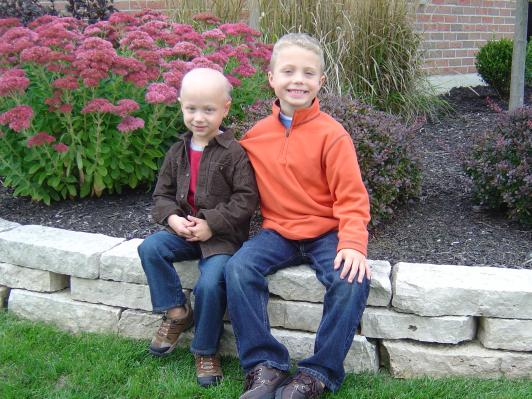 The rule of threes

So many milestones happen around age 3. Children are outgrowing the toddler years and becoming more independent. Many are starting preschool and learning to make new friends. Parents are learning to let go and allow their babies to blossom into curious, funny little people.
But Alexis and Scott Schwartz of Troy had a very different experience with “the threes.” Both of their sons were diagnosed with serious medical conditions at age 3 – first Brayden and then three years later, Devin.

“It was almost unbelievable,” says Alexis. “I remember telling the doctor that we had just been through open heart surgery with our oldest, and now this – a cancer diagnosis.”

At Brayden’s 3-year-old well child exam, his pediatrician heard something a little odd. She suspected a simple heart murmur, but sent Brayden to Dayton Children’s Hospital for tests to confirm. The cardiologist, however, discovered a hole between Brayden’s left and right atrium. Atrial Septal Defect (ASD) is the 3rd most common heart defect in kids, and often resolves on its own by age 5. The cardiology team advised a “wait and see” approach – hopefully the hole would close up naturally. In the meantime, Brayden showed no symptoms and carried on as a typical preschooler.

But by age 5, when the hole hadn’t closed, Brayden’s cardiology team recommended surgery – a simple procedure to implant a device that would mechanically close the hole. Heart tissue would eventually cover it. The day of the procedure, a scope showed that the hole was too big for this to work; Brayden immediately was a candidate for open heart surgery.

“The urgency of that transition from a simple procedure to major surgery was alarming,” recalls Alexis. “But we trusted the doctors and nurses. We never doubted their abilities or their treatment plan.” Just a few months later, Brayden was undergoing open heart surgery at another facility, with his Dayton Children’s care team highly involved in his treatment plan and ready to attend to his aftercare. “He was young and healed quickly. He only stayed in the hospital for four days before coming home.”

Just six months later, as Brayden was starting to return to his normal activity, the next bomb dropped.

It was the holidays, and 3-year-old Devin seemed like he was coming down with something. Suspecting the flu, Alexis took him to the pediatrician. Strep and flu tests were negative. His fever rose even higher overnight and she took him back to the doctor. Her mom intuition said something was wrong.

The doctor ran some bloodwork. “By noon the same day, the doctor herself called and said we needed to take Devin to Dayton Children’s emergency room where a hematologist would be waiting for us.” Alexis and Scott knew this couldn’t be good. The hematology/oncology team confirmed Devin had Acute Lymphoblastic Leukemia (ALL).

Devin was immediately admitted to the hospital, had surgery to implant a port, and began chemotherapy all in the same weekend. “Devin was little, but he never complained or questioned anything he went through.  He never said, ‘Why me?’,” shared Alexis. “Scott and I asked ourselves, ‘Why us?’ But in the end, you do what you have to do to keep your children healthy and safe.  Devin’s diagnosis and treatment protocol became our new normal.  We were so fortunate to have the care team at Dayton Children’s and the other families we met who were going through the same thing.”

The typical chemo treatment plan for boys is about three years, and Devin was no different. At 6-and-a-half, he had his last chemo treatment. During those three long years, the team at Dayton Children’s became an extension of the Schwartz family. The nursing team taught them everything they would need to know about caring for a child with cancer. One of the nurses even met with Devin’s preschool teachers to educate them how to protect him from germs –a constant threat for little Devin.

“We’re fortunate to have a comprehensive pediatric hospital right here in Dayton,” Alexis says. “The support of Dayton Children’s from our community has helped my children and likely helped your kids, grandkids, neighbors, and friends. Chances are, someone you know will benefit from this support at some point in their lives.”

“We were lucky to have Dayton Children’s,” she says. “We didn't need to look anywhere else for outstanding care for our children. And the boys were never afraid to come to the hospital.  Being in the hospital isn't always fun, but Dayton Children’s provided a friendly and comforting environment for all of us.”

Now, as 12-year-old Devin zips around the house on his hoverboard, you might never know he was less than five years out of chemo. “It’s like he doesn’t even have feet,” laughs his mom describing him hoverboarding while brushing his teeth and making breakfast.

This family, who has gone through trial after trial, has never lost their sense of hope, joy or possibility. In fact, they’ve managed to turn it around, giving hope to others by actively fundraising for pediatric cancer. The entire Troy community knows about the “Be Bold Wear Gold” event, hosted annually by the Troy High School football parents’ association. In the past four years, the Schwartz family has played a major role in building the event and supporting kids in Dayton Children’s cancer program.

As a family who once dreaded the number 3, the Schwartz’ now are looking to the future. In three years’ time, Brayden will be 18 and will no longer need annual check-ups for his heart. He’ll be poised to launch into a whole new world of adulthood, ready to take on anything life brings him. His little brother Devin will be starting high school, with cancer a long-ago memory. In three years, the next chapter of their lives will begin.