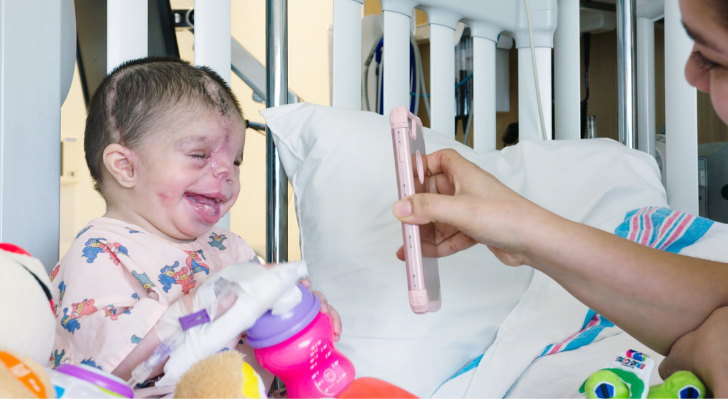 Raquel video chats with her twin sister back in Guatamala 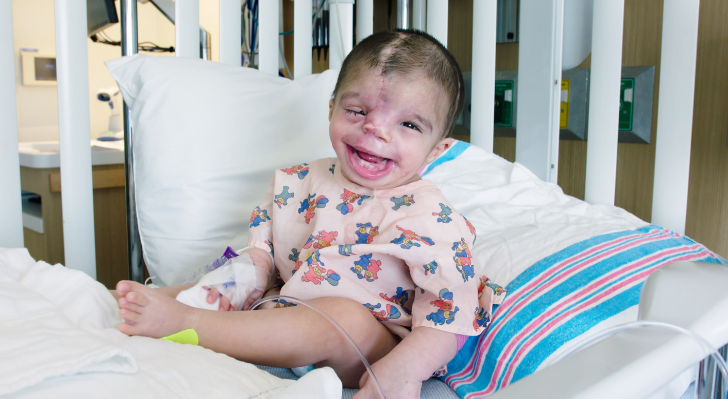 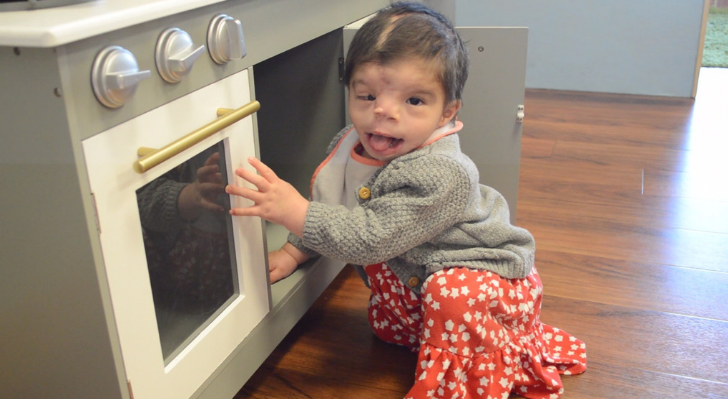 Raquel getting ready to be discharged from Dayton Children's 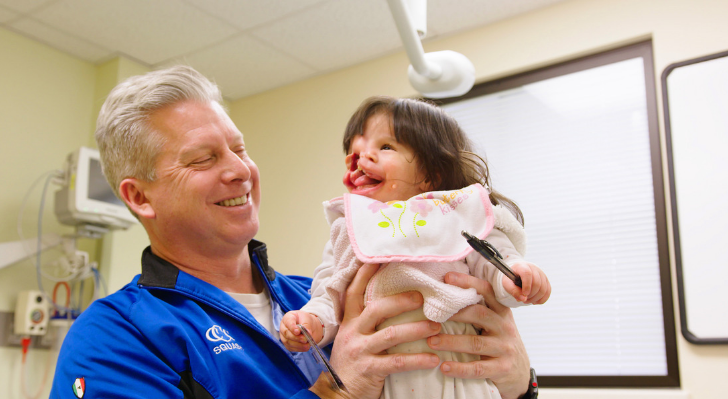 Raquel before surgery with Dr. Gordon 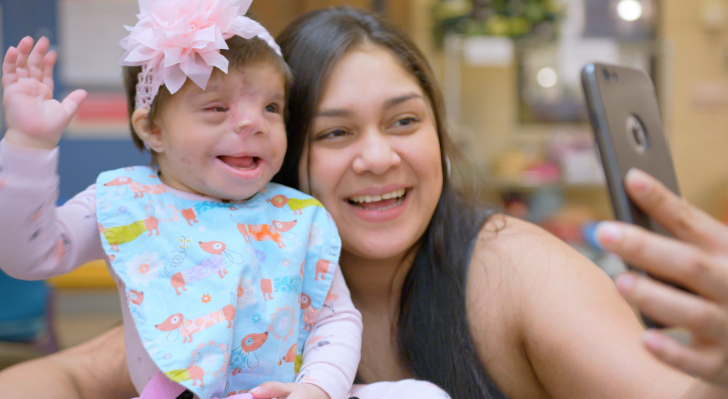 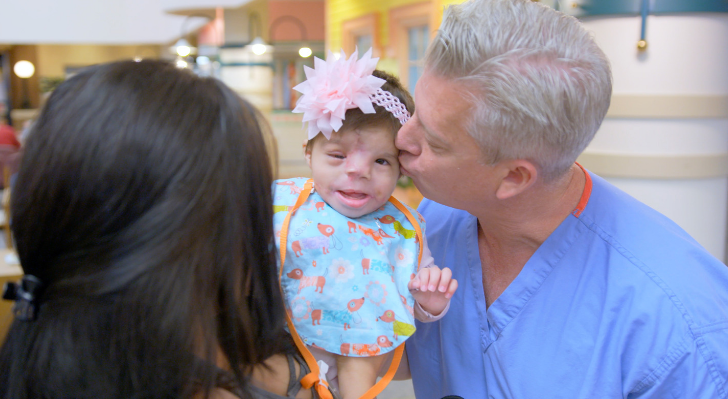 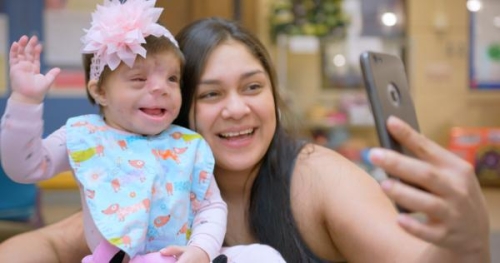 Raquel Cabrera blows kisses to her twin during a video phone call from Dayton Children’s Hospital, making the nurses in her room coo with delight.  It’s a skill the 17-month-old from Guatemala just learned so she’s practicing it every chance she gets. While her sister on the phone’s screen is her twin, the pair look nothing alike.

Raquel was born with a hole in the middle of her face so big she could put her fist inside it.  It’s a rare birth defect called a facial bipartition. “If I were to compare her to the usual clefts I see, on a scale of zero to ten, she is the ten,” says Petra Warner, MD, chief of staff at Shriner’s Hospital for Children - Cincinnati. 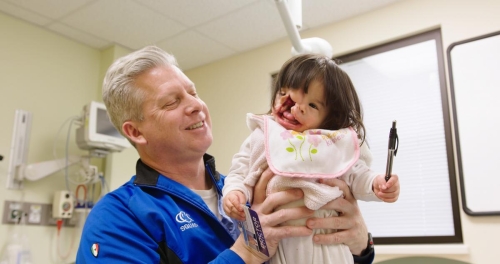 Her mother, Hilcy, struggled to get her help.  Most doctors who saw Raquel on mission trips to her Latin American home country couldn’t tackle the staggering magnitude of the surgery needed to fix her facial differences. Luckily, they all knew someone who could.

Raquel’s surgery was intense, requiring substantial resources.  Dr. Gordon brought in Robert Lober, MD, PhD, a neurosurgeon at Dayton Children’s to be his partner, along with an entire team of surgical and critical care staff.

It wasn’t just the scope of the surgery, it was also the scale of how many things the surgeons had to fix at once. Raquel had an encephalocele, where the brain protrudes outside the skull - in her case, into her face - along with a fatty tumor inside her skull. She had hypertelorism, which is an abnormally large distance between the eyes, due to the large cleft, or hole in her face. That large hole also meant she didn’t have a nose or the top of a mouth. 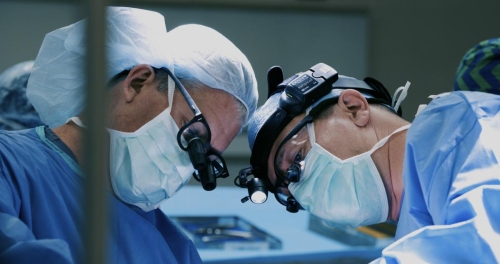 “Fixing all this at once isn’t typical, but she may not have another chance,” says Dr. Gordon. “We made sure her brain was in the right place and sealed to protect it.  We removed a lot of duplicated structures – for example, she had four nasal septums.  That’s the wall that separates your nose into left and right sides.  By removing the extras, we made space for her eyes to be where they should be.  Then we had to give her a nose and a mouth, all while making sure she could still breathe well.”

Another unique challenge was discovered during surgery.  “There was a keel of bone connected to her forehead, almost like a sword splitting her brain, nestled right next to a crucial blood vessel,” says Dr. Lober. “It wasn’t super obvious from the images we took before the surgery.  It took a lot of patience to remove but we did it safely.”

“No one I talked to has ever seen anything like this,” says Dr. Gordon. “We made 3D models to guide surgery but even so, it was a unique challenge. This is where experience, expertise and collaboration really made a difference.” 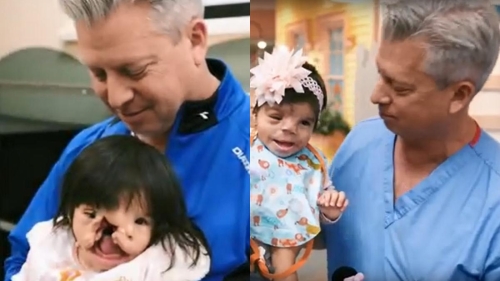 For Hilcy, seeing her daughter for the first time after surgery was the day she’s dreamed of since Raquel was born. “It’s nothing short of a miracle,” says Hilcy, in Spanish. “I didn’t take her out much before because I was worried about how people would treat her, that they would call her a monster. Now she can live freely.”

“When I looked through her paperwork before she came, there were so many things that told me she might not develop normally, from a cognitive point of view,” says Dr. Warner. “But in reality, I see a bubbly, adorable little 1 year old who just needs to keep growing.”

“I’m just amazed. She looks beautiful,” says Dr. Lober. “She was cute as can be to begin with – that big smile, and she’ll just jump up in your lap. Everybody fell in love with her immediately. Now to see her heal so fast and be happy is just amazing.”

“She’s just an unbelievable kid with great personality, super friendly and happy.  It’s heartbreaking to have such an incredible facial difference that it frightens people,” says Dr. Gordon.  “I am honored that Hilcy trusted me with her daughter and thankful that I could live up to that trust. I have great hopes that she has a wonderful life, now that people can focus not on her face but her amazing spirit and personality.” 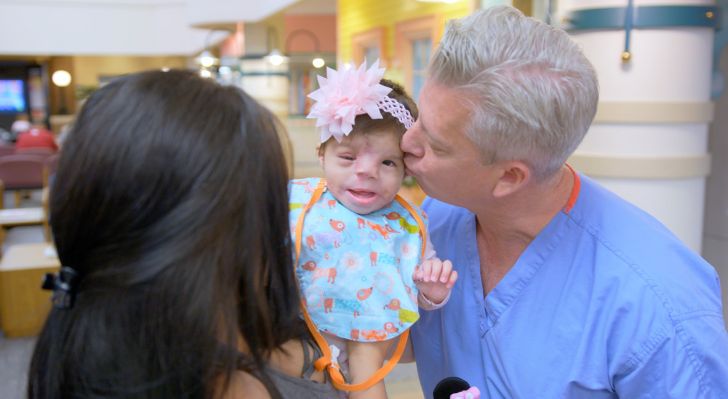 Learn more about the craniofacial surgeon who led Raquel's transformation.