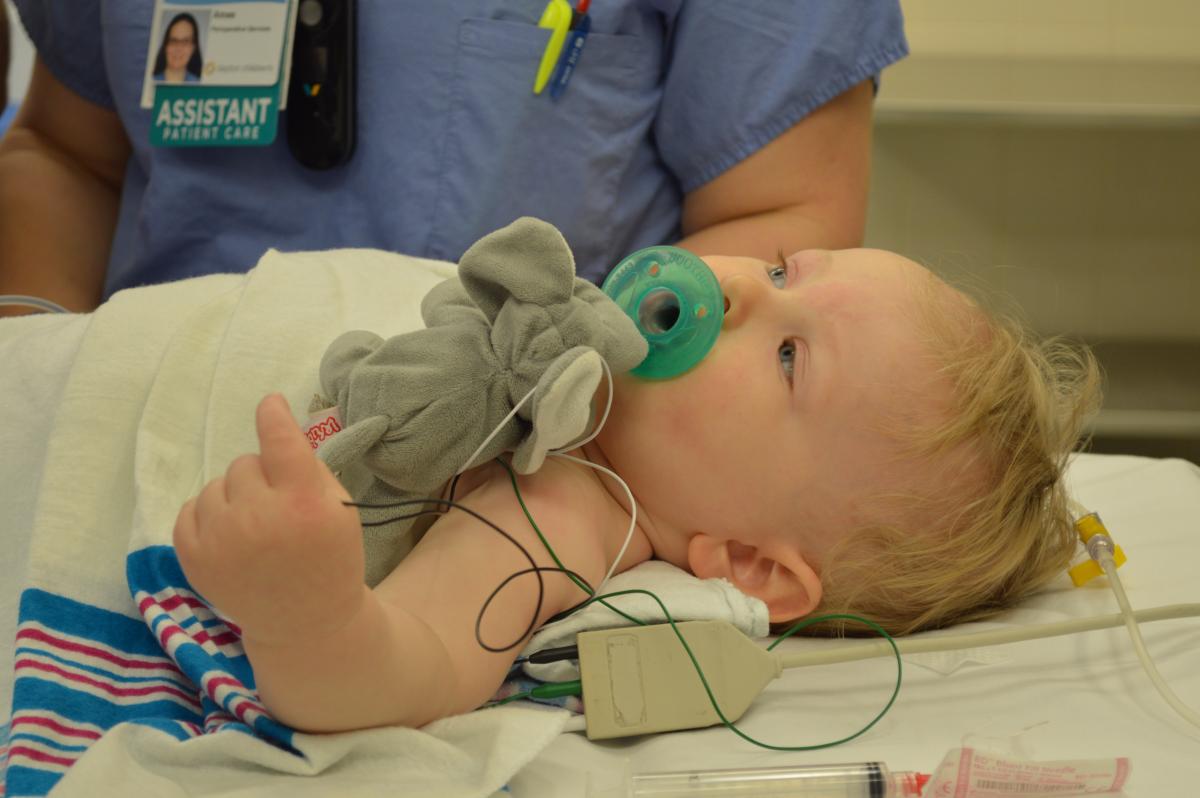 Camden Black plays with multicolored cords while relaxing with his elephant binky – all in the middle of surgery at Dayton Children’s Hospital.  A few minutes later, the toddler falls asleep listening to lullabies, and dozes peacefully through the rest of his procedure.

One-year-old Camden is benefitting from the innovation of the acute pain service team at Dayton Children’s.  He received a spinal block instead of inhaling a gas or having anesthetic placed in an IV.  He is numb from the waist down, but doesn’t need to be “put under” or have a breathing tube for surgery.  In addition, he won’t have the side effects that can come with general anesthesia medication – nausea, vomiting and constipation.

“He won’t need time to wake-up from the anesthesia, so that is very comforting for us,” says Camden's mom.  “Knowing that he will be back with us sooner, with less grogginess, eases our worries a little bit.” 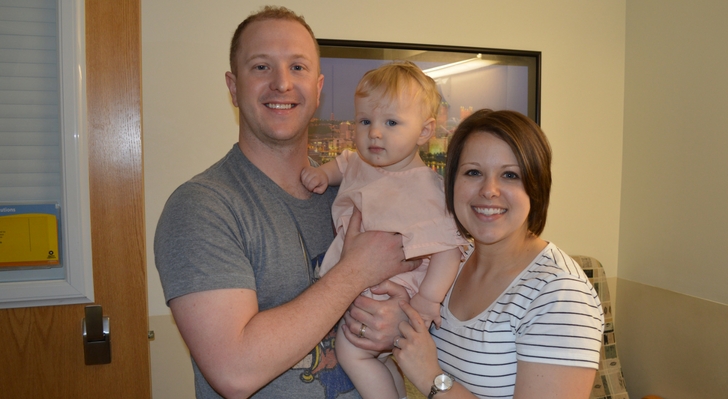 Watch as Camden undergoes the spinal block before surgery. He then falls asleep on his own!

“This is the second surgery for Camden,” said Camden's dad.  “The previous surgery was five minutes long but the recovery took a couple of hours for all the medication to wear off. While it was necessary for that surgery, we are so thankful that Dayton Children’s offers the spinal block for this surgery.”

Kristen Spisak, MD, anesthesiologist and leader of the acute pain service team, inserted medication directly into Camden’s spinal fluid, which numbed him from the waist down.  This allowed surgeon V. Rama Jayanthi, MD, to begin a minimally invasive surgery in Camden’s lower abdomen.

This type of anesthesia normally works best on children younger than one year old, weighing less than 20 pounds.  Generally, the surgery has to be below the waist and last less than 90 minutes.

“This method has some great advantages, especially for kids with other health concerns,” says Dr. Spisak.  “Intubating, or putting a tube in a child’s throat to help them breathe, can be difficult for children with respiratory issues.  For children having bowel surgeries, opioid-based medications given through IV slows down the bowels and therefore slows recovery time. For babies, many times they have to stay in the hospital overnight to watch for apnea after exposure to general anesthesia.  With spinal anesthesia, they can get back to mom and dad faster and eat as soon as they get out of surgery – which is a very big deal for parents who have had to keep their child from eating before surgery!”

Dr. Spisak began this service in October 2016, shortly after her arrival at Dayton Children’s.  She trained with Robert Williams, MD, at The University of Vermont Medical Center, who has been doing spinal anesthesia since 1978 and published a number of articles on its safety and effectiveness.  She returned to teach her team the techniques.

When the Food and Drug Administration (FDA) issued a warning about repeated or lengthy use of general anesthesia and sedation drugs in infants in December 2016, the program at Dayton Children’s was already well underway.

The FDA’s warning now requires a label on all general anesthesia drugs, even though most animal studies show that a single, relatively short exposure of general anesthesia is unlikely to have any negative effects on a child’s brain. A multi-center, long-term study is currently underway, with children in the study now at the age of two. Preliminary data from this study shows no long term side effects from exposure to general anesthesia as an infant.

“We believe general anesthesia to be safe, and necessary in many cases,” says Dr. Spisak.  “However we know that kids aren’t just little adults, and one size doesn’t fit all for them.  We are always looking for ways to go above and beyond to make surgery a little less stressful and a little more comfortable.”

One year ago, Dr. Spisak started the Dayton Children’s acute pain service.  She and her team have increased the use of nerve blocks at Dayton Children’s to better manage pain and decrease the amount of opioid pain medication a child needs after surgery.  “We inject medication around the nerve of the affected area, providing pain relief for up to 24 hours,” says Dr. Spisak. “A regional block can also be combined with general anesthesia so a child will still be asleep for their operation, but they will require less anesthetic and need lower doses of other painkillers after their surgery.”

“In the first few months, we were already doing more than 100 blocks a month,” says Cindy Brown, DNP, acute pain service clinical nurse specialist.  “When surveyed, 93 percent of respondents said the child had little or no pain after surgery and 98 percent said they had little or no nausea.  This truly is giving our kids a much better experience.”