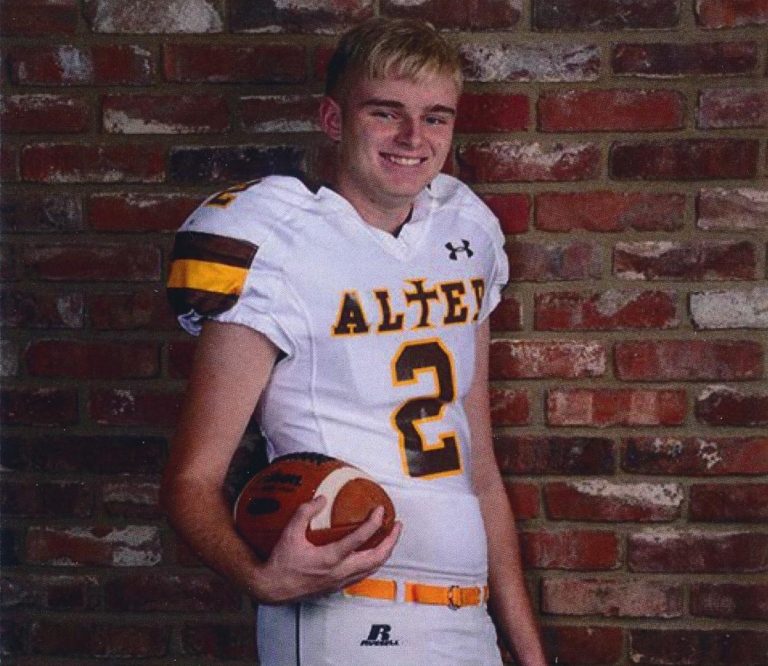 Luke Campbell stands out in a crowd. At 6'4", the former Alter High School football wide receiver is obsessed with the Cincinnati Bengals. He knows every player on the team tracing decades back. His love of sports is following him into college, as he enters his freshman year to study sports journalism at the University of Toledo.

However, there is more to this Centerville teen than meets the eye. “Looking at Luke, you would never know that he was born with kidney disease and a rare urethra disorder,” said his mom Deborah Campbell. “He has had two surgeries on one of his kidneys and several operations to reconstruct his urethra.”

Luke may not have been able to play his dream sport, if not for the encouragement of a Dayton Children’s urologist, Donald Nguyen, MD. “Dr. Nguyen has always been there for me and never gave up on me,” said Luke. “He saved my life.”

born to be different

Deborah delivered Luke at 38 weeks. She already knew he had kidney disease; it was detected during an ultrasound. He was immediately transferred to Dayton Children's newborn intensive care unit (NICU) when urine started backing up in his body.

In addition to kidney disease, doctors discovered he had a rare urethra disorder called megalourethra and hypospadias. This is where the urethra, the tube that empties urine out of the bladder, exits at another area of the body than where it should.

“During Luke’s first week of life, I was at the adult hospital recovering from my caesarean section,” said Deborah. “It was so hard not being able to hold my baby that first week. The staff at Dayton Children's kept me updated on Luke’s progress and sent photos while we were apart, which meant so much.”

Luke first used a catheter, then received an ostomy, which is a surgical procedure that reroutes the way urine exits the body. In Luke’s case, he had an incision on his side above his hip for that purpose.

After two months in the NICU, Luke was able to finally come home. His parents took special care to keep his incision clean. He had to wear two diapers, one wrapped around his side and the other on his bottom. He continued weekly appointments to track his progress.

“It was really hard to get out of the house with Luke in those early days,” said Deborah. “Most of the time, we stayed home because it was easier.”

Luke met Dr. Nguyen when he was just a few months old. Their relationship grew when Luke turned 5 years old and had to have one of his kidneys removed because the tissue was deteriorating. Then at age 6, Luke had a series of operations on his urethra that returned his ability to go to the bathroom on his own. “That changed his life forever,” said Deborah. 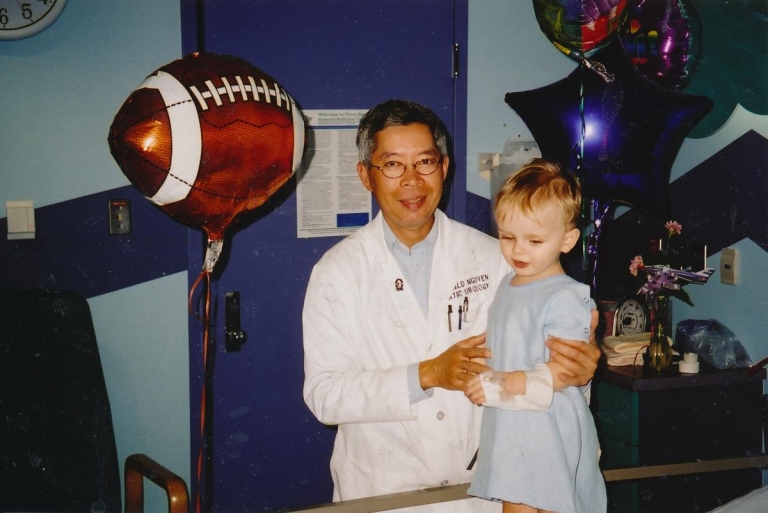 From Luke’s earliest appointments with Dr. Nguyen, he always had a football in his hand.  It was his source of comfort. “Football was the one thing that kept me going throughout my treatments, even as a young kid,” said Luke. “Some days it was hard to get up, but football kept my mind off it.”

Dr. Nguyen recognized Luke’s passion for football from the start and made sure that Luke could keep his dreams alive. “Luke is one of my superstar patients,” said Dr. Nguyen. “He has been through a lot from a young age and exhibits great responsibility. If Luke wants to play football, he should take the necessary protection and be allowed to pursue his passion. It is important to let our patients still be kids.”

Luke played football from first to twelfth grade, finishing his senior year as a wide receiver. He wore a flak jacket, a vest to protect his kidney every time he was on the field. It was also critical that he stay hydrated to keep that one kidney functioning well. “I always have a water bottle in my backpack and drink it throughout the day,” said Luke.

However, during the winter of his high school senior year Luke caught the flu during a particularly rough flu season. He became dehydrated and was hospitalized for a week at Dayton Children's. Dr. Nguyen heard that Luke was at the hospital and paid a visit.

“I had not seen Dr. Nguyen in years because I had been pretty healthy, up until that point,” said Luke. “It meant a lot that he visited me. He really kept my life together and motivated me over all of these years.”

Luke is back to being pretty healthy these days. His body operates on one kidney that functions at 38 percent. He has renal scans regularly because he will probably need a kidney transplant one day.

Despite these challenges, Luke is optimistic about his future. “I would tell other kids going through similar health challenges to keep fighting through it,” said Luke. “Find your passion to keep your mind on that, whether it be football or something else. Keep yourself positive.”

Luke’s parents are forever grateful for the care their son received. “I tell other parents if their child is sick, go to Dayton Children's in a heartbeat. The people there will save your child’s life. They saved ours,” said Deborah. “Dr. Nguyen is an angel. He loves Luke and cares for him like we do.”

a positive outlook after trauma

After an accident that left Asjah paralyzed from the chest down, she had to learn how to navigate new challenges.