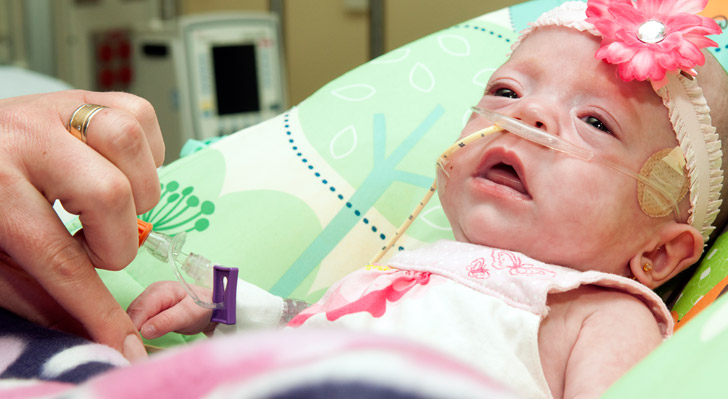 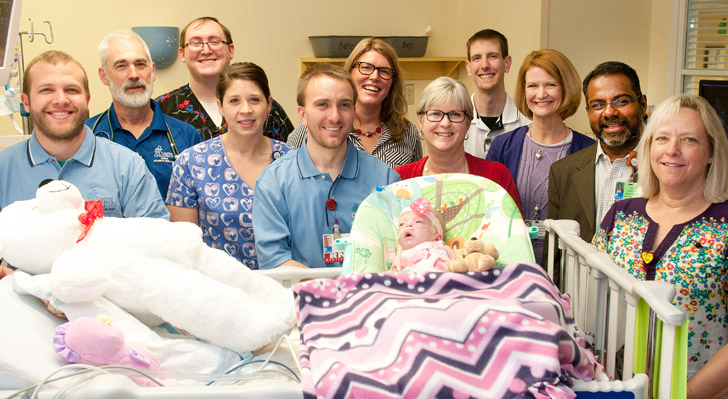 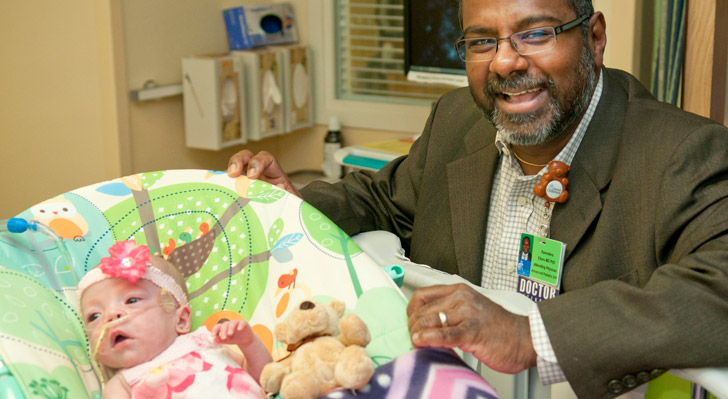 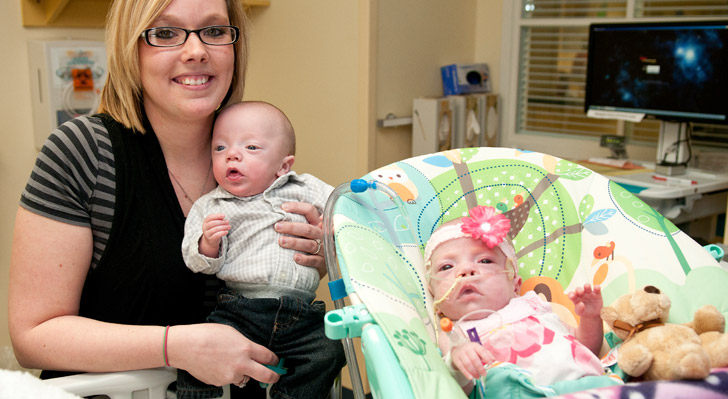 breathing a sigh of relief: first airway reconstruction a success

“There was one moment that I just remember breaking down when Lainey was in intensive care following her surgery,” shares Heather, Lainey’s mother. “I was sobbing hysterically and our nurse Abby just simply held my hand while I cried. That was my darkest moment where no words could help, but the touch of someone who understood my pain made all of the difference.”

Dayton Children’s became home for Lainey Perry who spent seven months at the hospital and is now thriving after airway reconstruction surgery this past spring.

“It was extremely terrifying to watch my daughter– who was the size of two Coke cans– struggle to breathe,” Heather says. “Then she had to be intubated. Each time they tried to wean her off of the breathing treatments, she struggled. It was a viscous cycle.”

Lainey was transferred to Dayton Children’s NICU for an airway evaluation from Ravi Elluru, MD, PhD, who joined Dayton Children’s in 2014 and is the world-renowned medical director of advanced ENT and the airway program at Dayton Children’s. She was suffering from stridor, noisy breathing that occurs due to obstructed air flow through a narrowed airway. Stridor is a symptom or sign that points to a specific airway disorder.

"Lainey sounded similar to a patient with croup - almost like a barking seal," explains Dr. Elluru. "The high-pitch sound is from the airway collapsing against the trach."

Dr. Elluru attempted to dilate her airway several times and performed several scopes… each time her airway collapsed. Airway reconstruction surgery was recommended; all other options had been exhausted.

Lainey was only seven pounds when surgery was recommended. “We were especially nervous because she was so incredibly tiny,” Heather says. “Dr. Elluru met extensively with our entire family about the procedure. We knew the risks, but we put our entire faith and trust into Dr. Elluru’s care; we knew he was the absolute best. This was our only chance to give Lainey a normal life.”

Life without this type of surgery would be very different for Lainey and the entire Perry family.

"Without this type of surgery, Lainey would have needed to have a tracheostomy to create an opening through the neck into the windpipe," explains Dr. Elluru. "So this surgery versus a trach provided Lainey - and her entire family - with an incredible improvement on quality of life."

Dr. Elluru recommended surgery in March, giving Lainey time to grow and the clinical team at Dayton Children’s time to prepare for Lainey’s highly complex case. But as Lainey’s breathing progressively worsened, surgery was moved up several weeks to February 5.

“The success of the airway program truly lies in the strength of the post-operative care team," shares Vipul Patel, medical director of the pediatric intensive care unit and one of Lainey’s many physicians. “For the first seven days she was in intensive care, a nurse never left Lainey’s bedside.

Special order sets were created for her, including a unique humidification therapy from respiratory to keep her airway moist to heal faster, sedation and medications - all designed to maintain a critical airway. The way Lainey's care team worked together in collaboration to achieve this accomplishment was phenomenal."

“The care Dr. Elluru, every doctor and nurse in intensive care provided to our entire family was nothing short of incredible,” Heather shared. “Even now that she’s home from the hospital, Dr. Elluru will still call us to check on her. It’s all of the little ‘extras’ from him and the entire intensive care team that make us realize how fortunate we are that this type of care is right in our backyard.”