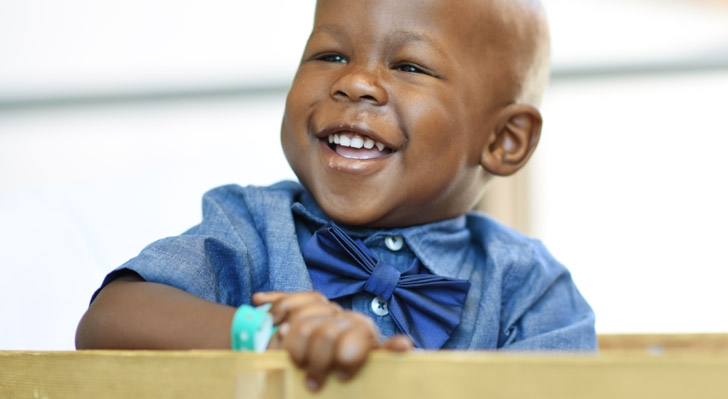 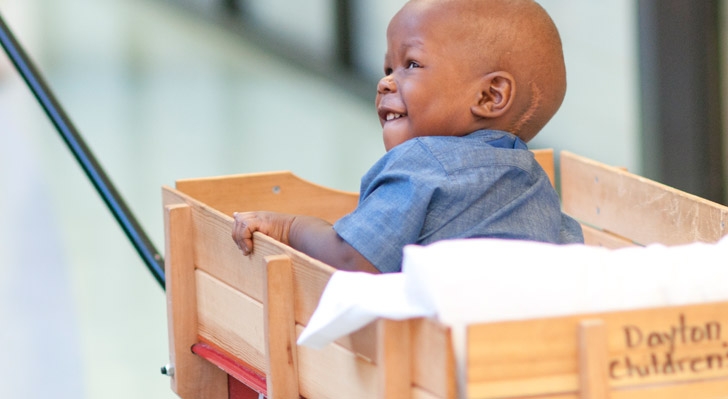 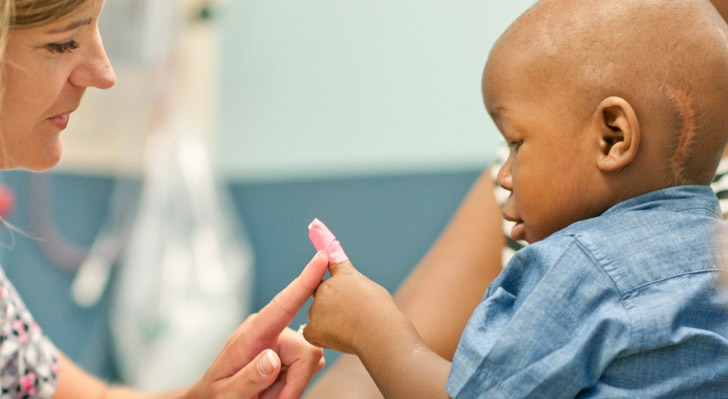 The emergency department at Dayton Children’s was the last place Mardi Johnson expected to be on January 30, 2015. Yet, her toddler had been sick on and off for a couple of months. But occasional vomiting and some swelling around his eye couldn’t add up to anything more serious than allergies. Could it?

Test after test was inconclusive, until Jules underwent a magnetic resonance imaging (MRI) scan. Mardi’s mind almost couldn’t comprehend the words as they came out of the doctor’s mouth: “You were right to bring him in. Jules is very sick—he has a brain tumor.”

Jules, then just 18 months old, was admitted to the hospital immediately, and Mardi spent a restless night at his side. The next morning, she met with pediatric neurosurgeon Laurence Kleiner, MD. He explained that the tumor, which was larger than a golf ball, was causing a harmful buildup of cerebrospinal fluid in Jules’ brain. It had to come out—immediately.

The eight-hour brain surgery took place later that day. Before Mardi went in to see Jules in the post-operative suite, a nurse gently told her what to expect — but it was still a shock. “Jules was hooked up to all these machines, with a tube in his mouth and his head wrapped up. He was all puffy just lying there, so small in his bed,” Mardi says. “But he moved his hands to wave at me, and I started to feel a little hopeful.”

And there was reason to hope. Dr. Kleiner told Mardi that he had been able to remove the entire tumor, and the cancer had not spread to other parts of Jules’ body. The bad news: A routine post-surgery X-ray revealed a second, eight-millimeter brain tumor, which had not been visible in earlier scans. Rather than recommending a second surgery to remove the tumor, Jules’ doctors advised sticking to the original plan of having Jules undergo an intense course of high-dose chemotherapy. Ideally, the chemo would kill any remaining cancer cells, including the residual tumor.

part of the family

Chemotherapy began in March. Every other week, Jules was admitted to the inpatient oncology unit at Dayton Children’s, where he would receive chemotherapy drugs through a port in his chest. During his “off weeks,” he would come to the outpatient oncology clinic for lab tests and a check-up.

During the tedious hours of chemotherapy treatment, child life specialists entertained Jules with toys and games. Nurses watched Jules closely for signs of distress, doing everything they could to make him comfortable. Doctors took time to answer Mardi’s questions, and remembered to treat Jules not as just a patient, but as a little boy who loves to make people laugh.

“Everybody here knows Jules, everybody loves Jules,” Mardi explains. “It’s really phenomenal. I feel special at Dayton Children’s — the care team really loves on him, just like he is part of their family. They act like he’s their child, too."

Throughout the spring and summer months, Jules responded well to the chemotherapy. But in September, Mardi received another blow when an MRI scan showed that the residual tumor no longer seemed to be shrinking. Jules’ cancer specialist, Jordan Wright, MD, recommended brain surgery to remove a small amount of the tissue for testing. He—and everyone else who loves Jules—is hoping to find that it is scar tissue, not cancer.

While she waits for the results of that surgery—and considers the possibility of more therapy for Jules—Mardi is focused on staying positive. “I think about the future a lot, and on a good day, I see Jules doing everything,” she says. “He loves music—he could be a musician. He is very loving, so I definitely see him having a family of his own. He’s had so much early experience with doctors and nurses — maybe he could even be a cancer specialist.”

Whatever the future holds, Mardi says she knows some things for sure. “I don’t think this experience will ever fade,” she explains. “We will always remember, and we will always come back to visit.” And, she adds, “We will always be thankful for the people at Dayton Children’s who took care of Jules when he was sick.”

Watch this video to learn more about Jules' story. 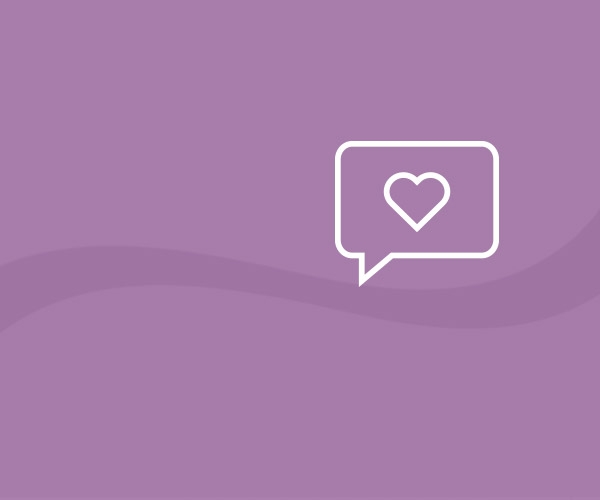