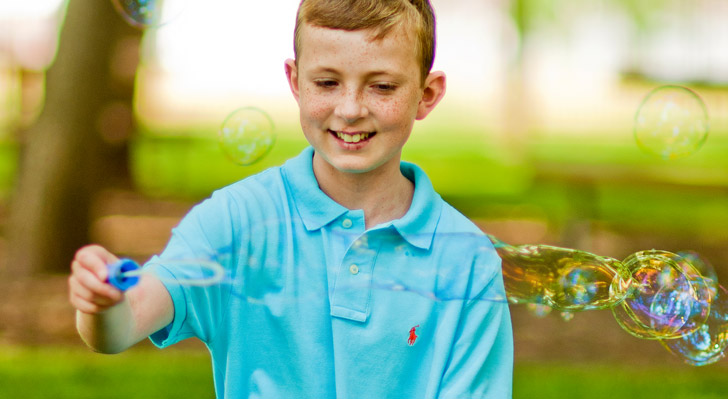 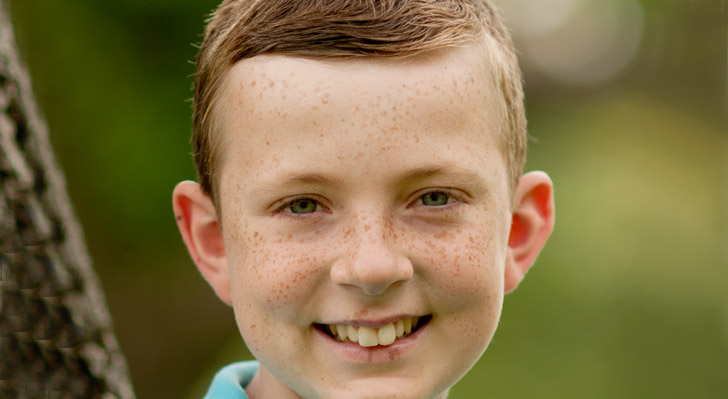 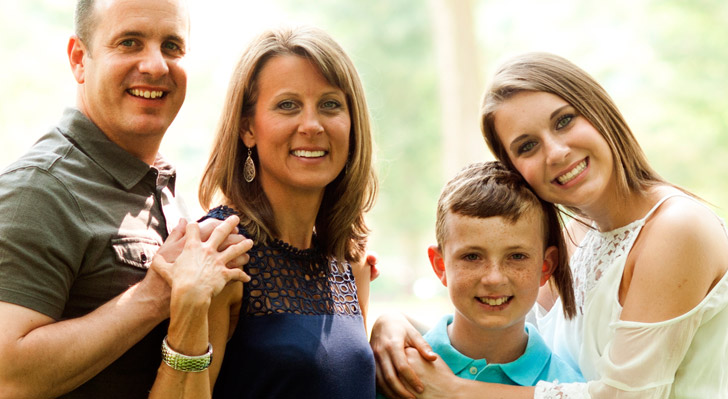 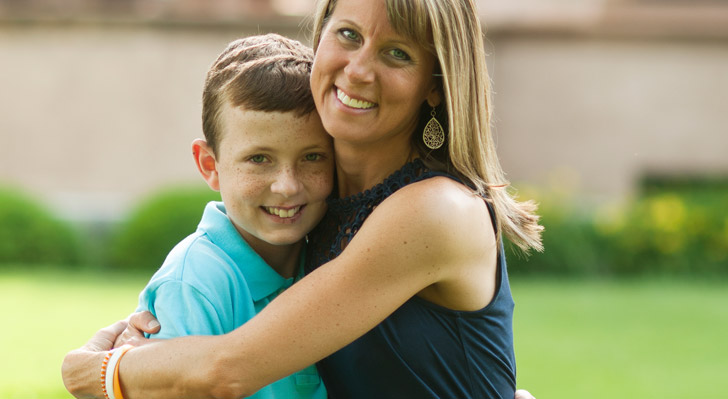 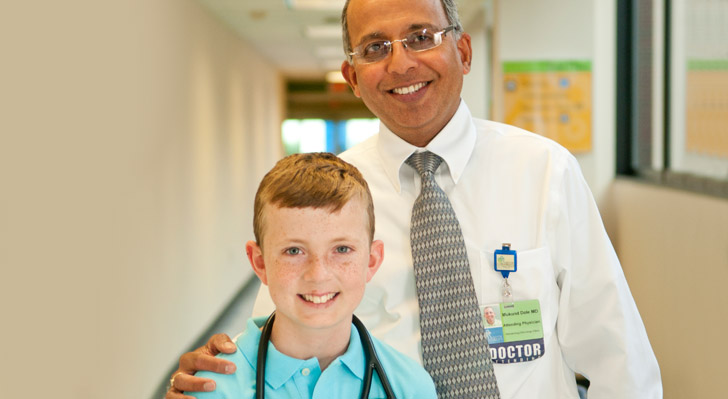 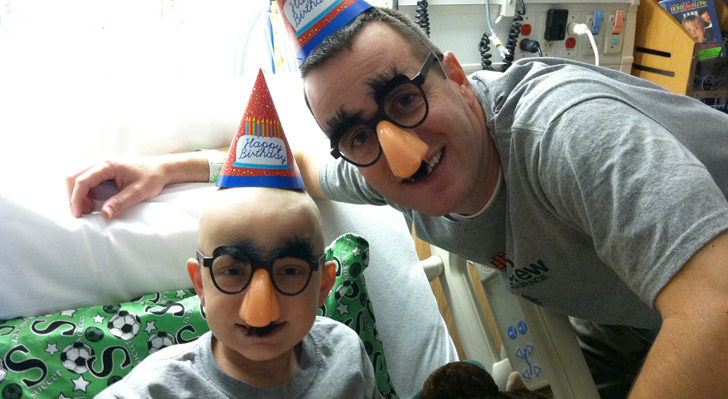 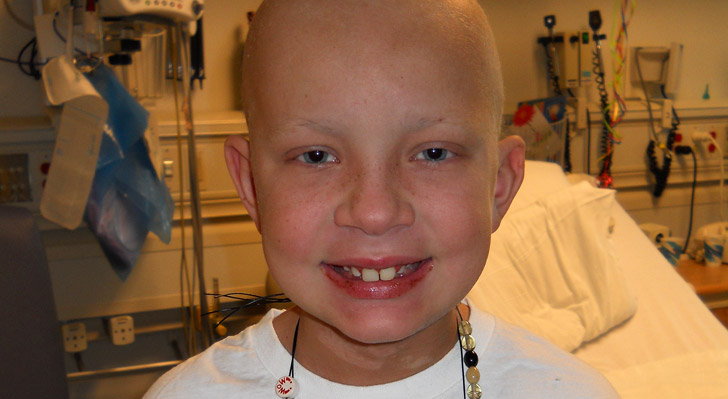 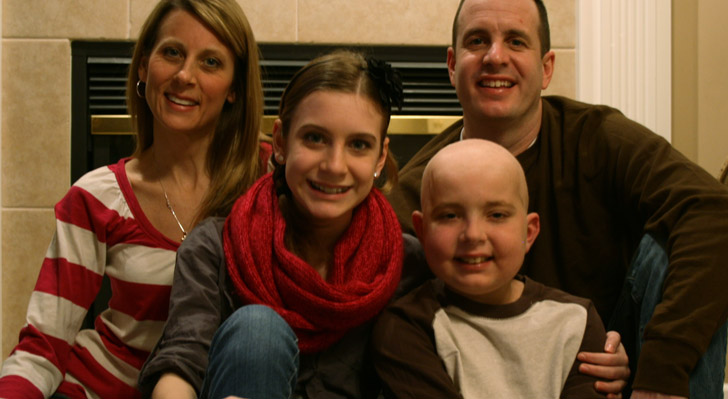 There’s a saying that lightning doesn’t strike twice. But when you ask the Booher family and their best friends and neighbors, the Barnett family, they would say differently.

“The odds that our son Caulin would have cancer, not just once, but twice are extremely rare,” says his mother Suzanne. “The odds he would be diagnosed immediately after our best friend’s daughter, Ally, ended her own cancer treatment is extremely rare.”

Both families fought together and survived childhood cancer, leading to the creation of their family-based charity, “Together We Fight,” designed to support future families who hear the words, “Your child has cancer.”

Suzanne describes finding Caulin’s cancer as unconventional. Caulin was scheduled for surgery to remove his adenoids. The surgeon noticed that his adenoids looked very large and sent them to the lab for testing. The results showed malignancy.

“I was standing in the store shopping when I got the phone call,” shares Suzanne. “I almost dropped the phone. My first thought was they were wrong, his labs were wrong; the whole thing was an error. Caulin just played a soccer game two days before, he looked perfectly healthy.”

The physician told them to pack a bag to stay at Dayton Children’s for a week. “He said, ‘They will wait for you in the emergency department.’ That's when I knew it was bad.”

The Booher’s didn’t tell Caulin about the phone call, instead waiting for a firm diagnosis before explaining to their son who was just in third grade at the time that he too, just like his good friend Ally, had cancer.

“We met Mukund Dole on day one and instantly liked him,” Suzanne shares. “He was an incredible teacher, sitting down with our entire family and teaching us a crash course in T-cell Acute Lymphoblastic Leukemia, which is faster growing and a less common type of leukemia.

Treatment started immediately and the Booher’s were given an 80 percent survival rate based on Caulin’s case.

Within a matter of weeks, it was clear Caulin wasn’t responding to the treatment. Following a series of genetic tests, the Booher’s learned Caulin had a genetic marker, causing resistance to treatment.

They were given two choices, try staying with the current protocol or go to Cincinnati Children’s for a bone marrow transplant.

“It’s a delicate balance, you want to kill as many leukemia cells as possible, but we didn’t want to compromise his body,” says Suzanne. “It was an agonizing decision, but we determined a bone marrow transplant was the best option to save his life.”

Caulin said goodbye to his family and friends and spent the next 42 days in isolation. “There are very strict restrictions for a bone marrow transplant, it completely wipes out your immune system,” explains Suzanne. “The complete isolation was the hardest part, it was like living in a bubble, literally.”

The transplant led to a condition called Graft Versus Host, causing a terrible rash all over his body as it tried to fight off the foreign bone marrow.

“The medication to settle the process down suppressed his immune system even more, which led to a second cancer diagnosis of lymphoma,” Suzanne explains. “This diagnosis was the hardest; we thought we had endured all of this for nothing.”

Following the transplant he lost his hair, his mouth would bleed daily, his fingernails fell off and his neck swelled so bad that he nearly needed a breathing tube.

Caulin’s second round of chemotherapy was cut short due to the devastating effects on his body. The anxiety that the cancer was still growing was mounting.

“He had to have a PET scan and we were fully prepared for the cancer to still be there,” says Suzanne. “It was completely gone… we were shocked. That’s when the bad news in our life finally started to fade.”

Caulin had his last round of chemotherapy in March 2013 and was released back to Dr. Dole for ongoing care. Suzanne attributes Caulin’s remission to two factors: Caulin’s incredible attitude and perseverance through cancer treatment, and Dr. Dole’s support throughout the entire process.

“Dr. Dole lives his life woken up in the middle of the night by parents like me,” shares Suzanne. “He supported our efforts to help Caulin remain a kid throughout this entire process, including allowing him to play ball in his room, participate in music therapy and study with a tutor daily. We will be forever grateful to him. Not all kids make it through cancer, that’s why we were looking for a way to pay our gratitude forward and help other families like ours and the Barnett’s.”

In the past year, Together We Fight has helped more than 60 families. Families receive a bag complete with gas cards, pillow pets, tokens for free parking, gift cards to the hospital’s café, crafts, cards, games and other items for a long hospital stay. Items that go into the bag were selected by those who knew best – Caulin and Ally.

Money raised by Together We Fight has also provided a blanket warmer and gaming system for the hematology/oncology unit.

“We know how hard the process of surviving cancer is and we are blessed with a positive outcome,” says Suzanne. “Together We Fight is about live your life being thankful. We are thankful that Caulin is in remission, we are thankful to Dr. Dole for everything he has done for our family, and we’re thankful that Dayton Children’s is our hometown children’s hospital.”

Today, Caulin lives to play golf and soccer and is a straight A student. He’s a member of the Kids’ Advisory Board at Dayton Children’s, sharing his opinion and ideas for the new patient tower design.

together we fight - Caulin's story

Watch this video to learn more about Caulin's story.