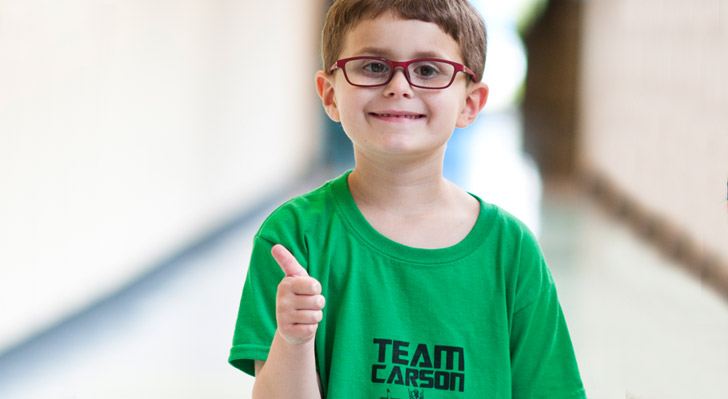 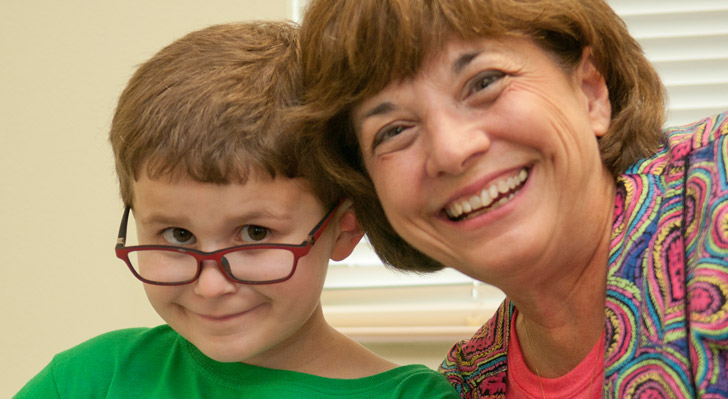 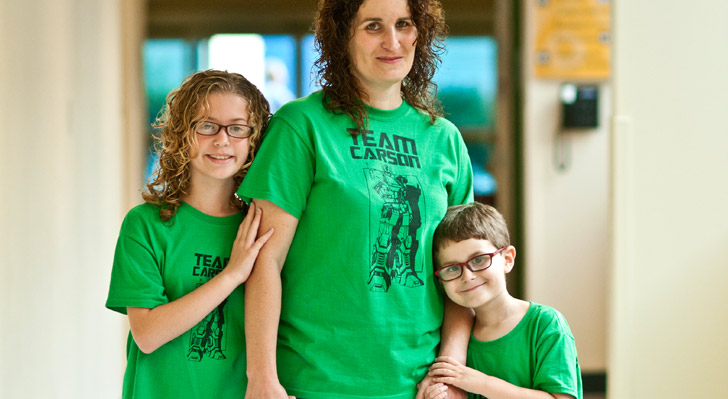 Carson Bailey and his family

battle against a brain tumor

Just like his favorite character Optimus Prime from Transformers, Carson Bailey went to battle against a brain tumor and survived the fight of his life.

When Beth and Mike Bailey look back at the signs after his diagnosis, they saw them everywhere. The vomiting was sporadic and came from nowhere. He’d fall down, but so did other kids his age, after all, he was only 5 years old.

Early X-rays from his pediatrician showed he was simply constipated. He would throw up one time, and then he was fine. Then he would be back telling jokes about chickens and dancing behind your back trying to get you to laugh. A month later, treatment for constipation backfired and the headaches started, now coupled with daily vomiting, sometimes mixed with blood.

“The emergency department physician at Dayton Children’s urged us to make an appointment with neurology and ophthalmology,” Beth says. “Parent intuition told us it was more serious than constipation, he was suffering daily vomiting and headaches. We didn’t know exactly what all we were getting ready to face, but we didn’t want to rob Carson and his sister Sophia of an already scheduled trip to Disney World, so we went armed with anti-nausea and headache medicine to make sure Carson could enjoy the trip.”

After their trip, Beth took Carson to his scheduled appointment with Michael Bloom, MD, ophthalmologist at Dayton Children’s. “Dr. Bloom said there was something pressing on his optical nerve,” explains Beth. “I called my husband immediately, who rushed to Dayton Children’s.”

Carson was sent to the emergency department and the family first met Laurence Kleiner, MD, neurosurgeon at Dayton Children’s.

“Dr. Kleiner explained everything the team was looking for and ordered a CT scan, which revealed our worst fears – a brain tumor,” Beth shares. “Based on the location, he believed he would likely be able to remove the entire tumor. He was 99 percent sure it was a medulloblastoma and malignant.”

In that moment — hearing her only son had cancer — brings back fear and thoughts that are still painful for Beth to revisit years later. The pain of telling their 5-year-old that he had a brain tumor still haunts Beth today.

“Carson didn’t understand much at first,” Beth says. “He just knew that he was nauseous and had headaches, and that being in the hospital would help him feel better.

We told Carson right away that he had a spot on his brain called a tumor that didn’t belong there, and Dr. Kleiner would put him to sleep to get pictures of his brain and he needed surgery to remove the spot. Once we could give the cancer a name and we knew the exact treatment, we were very open and honest with both Carson and Sophia, answering any questions they had.”

Surgery was two days later to remove the brain tumor, but it was a malignant cancer, medulloblastoma. Medulloblastoma can spread to other areas of the central nervous system, especially around the spinal cord. After surgery, radiation and chemotherapy were the next order sets.

“Our biggest fear was how this would affect him long-term,” Beth explains. “We were terrified for what he would have to go through, we simply prayed that in the end, he would be our same little boy who loved Transformers and telling jokes. Everyone at Dayton Children’s felt our same pain and fears. The entire team was extremely compassionate and understanding.”

“He was very honest and straightforward with us,” Beth says. “He didn’t just tell us what we wanted to hear, he was a straight shooter,” Beth explains. “We were told his survival rate was 80 percent based on his case, and he spent a lot of time answering our questions.”

Though the Bailey’s were suffering from information overload with a fresh diagnosis, the information was comforting.

Like many families who have a child with cancer, the Bailey’s took one day at a time.

“When he woke up from brain surgery, initially he couldn't talk, walk or move his left side,” Beth describes. “Though his physicians explained it was most likely temporary from the surgery, no one knew 100 percent that it wouldn’t be permanent. That’s the risk of brain surgery. It was terrifying.”

Slowly, Carson started to regain simple, common functions like talking and walking. “Within 24 hours, he could talk, but his speech was very slurred,” shares Beth. “Regaining the ability to walk with assistance took two weeks, but he was determined to learn again how to put one foot in front of the other all by himself. There were terrifying moments followed by so much relief and joy.”

After the brain tumor was removed, Carson was fitted for a radiation mask and chemotherapy started. “He was a trooper and refused to be sedated because radiation would go faster if he was awake,” Beth shares. “To this day, I can’t believe a 5-year-old child laid still with his head locked down for 30 minutes each time he had radiation, his perseverance was incredible.”

In total, Carson had 31 doses of radiation and nine cycles of chemotherapy, complete with a silly string party to celebrate the very last chemo treatment.

Though he’s finished fighting the disease itself, the effects of radiation and chemotherapy have taken a toll on him. He goes to weekly therapy for balance, strength and coordination. Also, he takes thyroid medicine from the effects of radiation and has partial hearing loss. Carson’s follow-up care at Dayton Children’s will continue for years to come. Medulloblastoma requires very close monitoring, including regular brain MRI studies.

“When you spend that much time in the hospital, the nurses quickly become like family, they went above and beyond in everything that they did for Carson,” Beth says. “Though he certainly hated cancer, he loved his physicians and all of his nurses in the hematology/oncology unit.”

Two years after diagnosis and now in remission, Carson still loves his hero Optimus Prime, sharing chicken jokes and dancing behind your back.

“It’s still so raw on so many different levels,” Beth says. “This experience has changed him; it’s changed all of us. When I think of the pain and emotion he’s gone through and look back on his surgery, chemotherapy and radiation, the change is miraculous. I am grateful that Dayton Children’s helped us recapture the life that Carson had before cancer.”

02/03/22 | patient story honoring the legacy of a "one-of-a-kind" physician After her son was cared for by the late Dr. El-Sheikh, Kayela found a way to honor his legacy.
03/10/22 | patient story specialized care for premature twins An early arrival resulted in complications for both Tobias and Thea, but the exceptional care provided by specialists at Dayton Children's the Voss family is forever grateful.