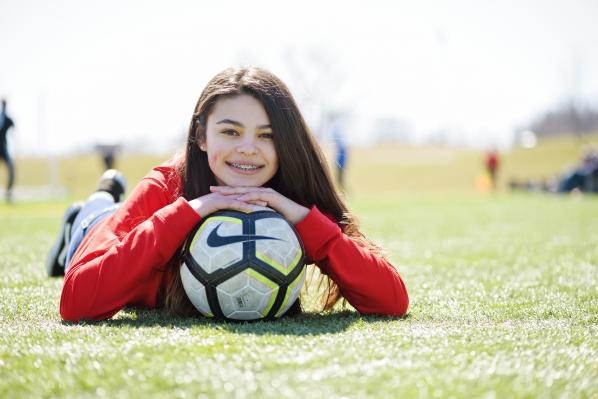 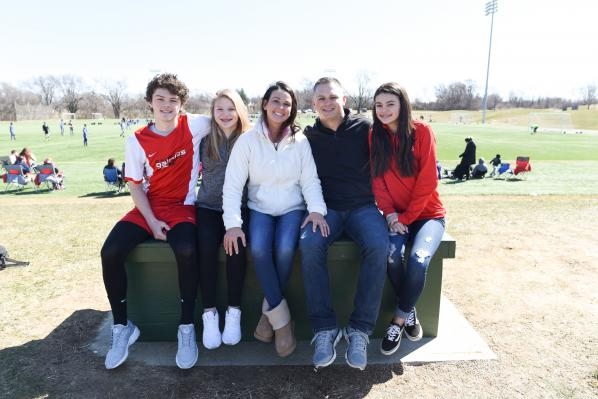 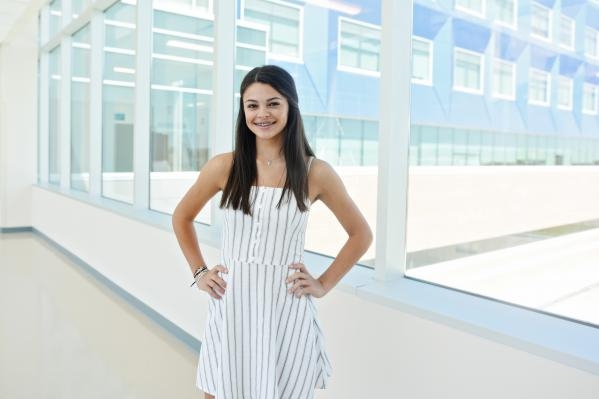 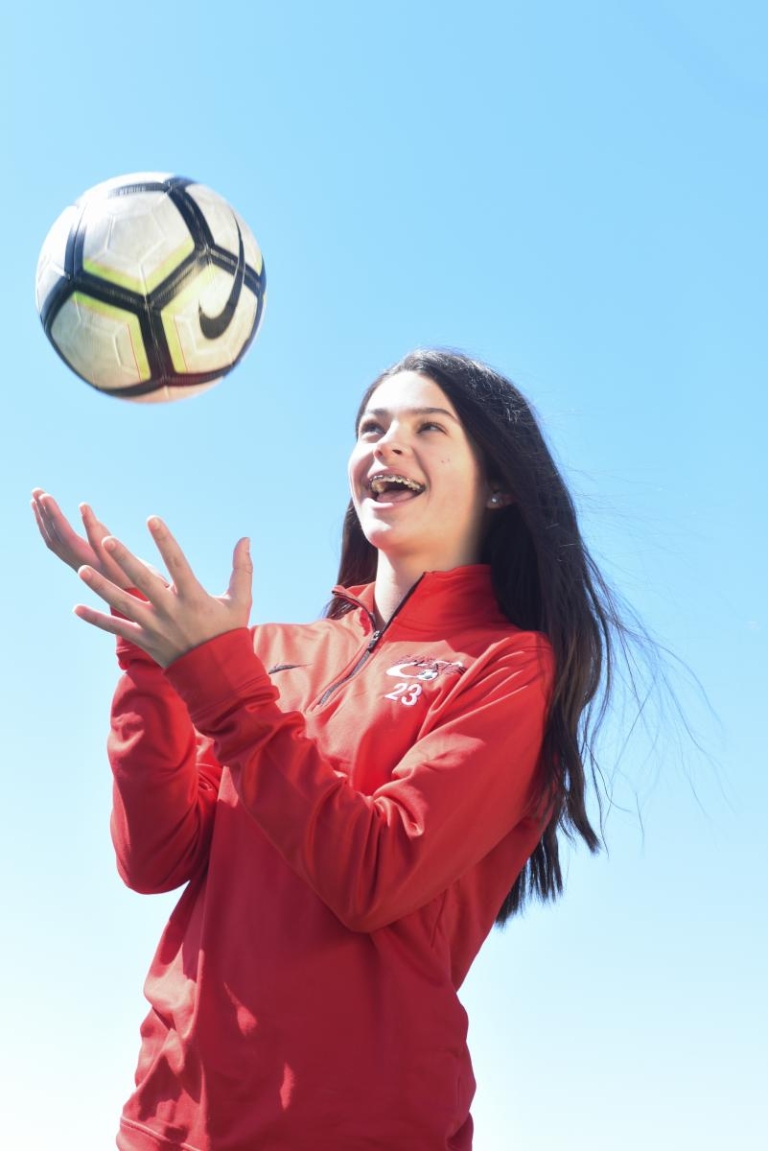 Like the soccer ball that is so much a part of their lives, the Mundeys don’t stop rolling for long. Life moves at breakaway speed for this Beavercreek, Ohio family of six. So it’s no surprise that when scoliosis hit, it hit fast.

Dayton Children’s orthopaedic nurses did a scoliosis screening at my school in seventh grade and discovered I had a really small curve,” 15–year-old Allison Mundey remembers. “It was so minor that it was ‘wait and see’ at that point. But then I hit a major growth spurt and all of a sudden I started having problems.”

“The doctors told us Allison had a curve over 50 percent in the upper and lower spine, as well as rotation,” says Matt, Allison’s dad. “It was noticeable when you looked at her and it was starting to impact her movement and her self-confidence.”

“I remember noticing it for the first time right over there,” Allison says, pointing to the corner of the soccer field at Athletes in Action in Xenia, Ohio, where she played many a game as a member of the Ohio Galaxies FC. “We were practicing and every time I would cut, my back would hurt. By the time I got home that night, it was killing me.”

“She couldn’t do even one sit-up,” recalls Marianne, Allison’s mom. “I would say, ‘Come on, you can do sit-ups!’ But she just couldn’t.”

When it was time to choose a solution, they needed something that could move as fast as they did. “We looked at non-invasive options, which is always our first approach,” says Michael Albert, MD, orthopaedic surgeon and medical director of the Pediatric Spinal Center of Excellence at Dayton Children’s Hospital. A world-renowned expert and pioneer in innovative spinal surgeries, Dr. Albert continually searches for new and better ways to treat orthopaedic conditions. He worked with BandLoc, a medical technology think tank of industry veterans and scientists who were developing less invasive, anatomy-friendly technologies in Waxhaw, North Carolina. Dr. Albert performed the very first BandLoc surgery in the country on August 22, 2016 at Dayton Children’s Hospital.

polyester’s not just for pants 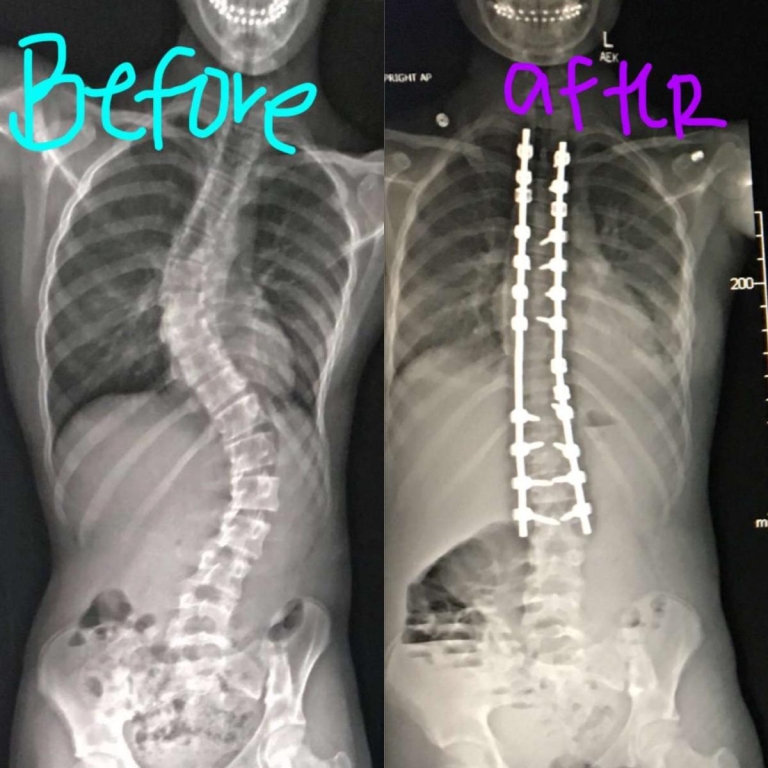 Traditionally, scoliosis surgery places metal pins into the bones of the spine, or vertebrae, which then attach to a metal rod. This corrects the curve and holds the spine in the proper place. Adding the BandLoc to this system provides an extra layer of control and stability.

Think of it like a big zip tie made of polyester. The surgeon weaves the polyester band from the pin, through the spine, locking it with a clamp to the rod. The bands are simple, versatile and powerful, gradually correcting even large spinal deformities with no bone or band failures. It also allows a great deal of flexibility for the surgeon.

“While surgeons have been using a variety of ways to do this in the past, with metal wire for example, there are a few key differences that make the BandLoc superior.” explains Dr. Albert. “The first is the polyester band does not degrade the bone as metal wire could do after a while. We can also use fewer pins by leveraging the flexibility of the polyester. For children who have low bone density or bone issues that prevent the ability to put pins in the vertebrae, the polyester band can be used without the metal pins.

“The second advantage is the tensioning device. This is the apparatus used during surgery which allows the surgeon to adjust and readjust the tension on the bands as necessary, ensuring the best correction possible.”

Scoliosis occurs in three directions. Most people are familiar with the side-to-side curve, but the spine can also be distorted front to back and rotated. The flexibility of BandLoc helps customize treatment to exactly what each child needs. “The research we just presented showed that outcomes are as good or better than with the traditional approach alone, so we are very happy with the BandLoc advancement,” says Dr. Albert.

After consultation with Dr. Albert, the family chose spine surgery using BandLoc and OrthoPediatrics Response Spine System. “We feel so fortunate to have Dr. Albert,” says Marianne. “The fact that he is on the cutting edge of treating teens with scoliosis and has done so many of these innovative procedures really eased our mind.” 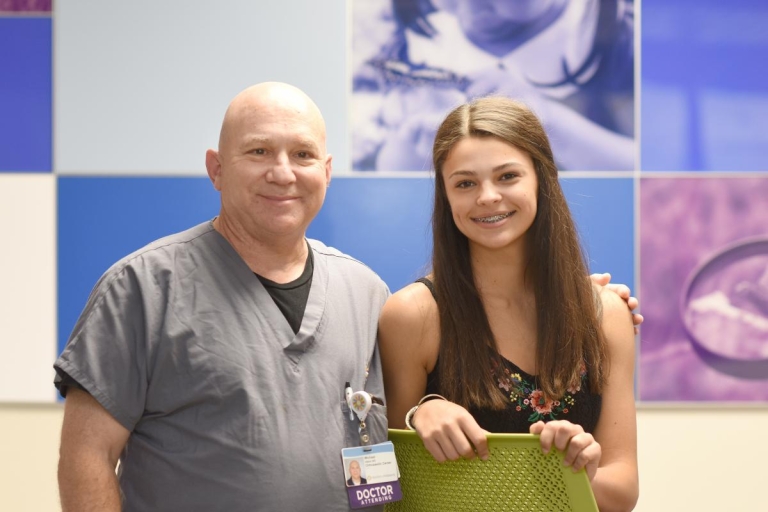 “I love Dr. Albert,” says Allison. “When I ask my friends who have scoliosis who they see, it’s always Dr. Albert. Then we say together ‘love him!’”

“Dr. Albert was so flexible, as well,” says Matt. “We wanted to schedule Allison’s surgery when she would miss the least amount of school. For most people that would be summer, but for Allison to miss a summer of soccer would have been devastating. We picked a date for surgery right after Thanksgiving and used the two-week break around Christmas to our advantage.”

from surgery to soccer

While the morning of the surgery was nerve-wracking for both Allison and her parents, the anesthesiologist, Edward Walz, MD, put their minds at ease. “Dr. Walz was really reassuring. He said ‘I will take care of you’ and it really helped me relax,” says Allison.

“We were inpatient for just three days, which I think is about half the time of a traditional surgery,” says Marianne. “While the first couple of days were difficult, the pain protocol they had in place really made it easier on Allison.”

“We called our room ‘the penthouse,’” remembers Matt.

“It was right on the corner and had an amazing view of the city and river.”

“I have pictures of these beautiful sunsets outside my window that I don’t remember taking,” jokes Allison. “I didn’t want to leave Dayton Children’s. My nurse, Molly DePoorter, had actually done the original scoliosis screening at my school. She said ‘I’m going to treat you like my child and I’m going to get you through this.’ She gave me her phone number so I could call her whenever I needed her. I kept her number in my phone—it made me feel safe.” 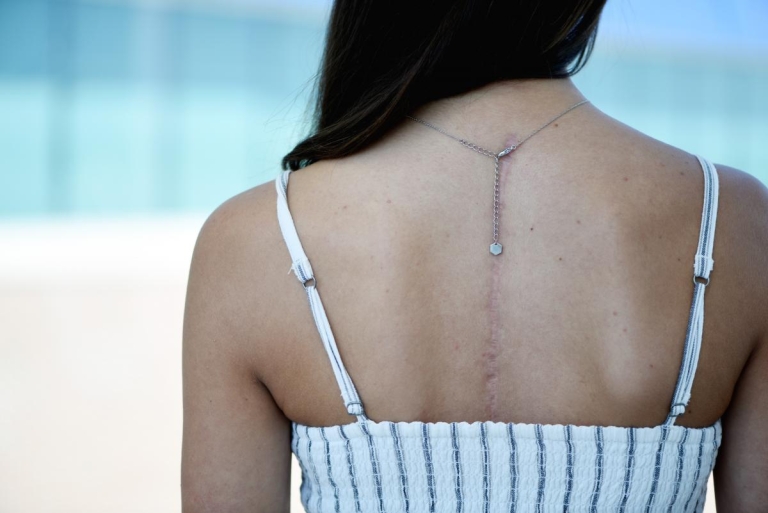 The other thing that surprised the family is how fast recovery happened. “It’s amazing,” Allison says. “The second day after surgery, I got out of bed. The second week, I was walking. The third week, I could climb stairs. Four months after surgery, I am jogging and doing some weights. By five months, I will be cleared and playing soccer again.”

The only reminder of her scoliosis now is her scar—a satisfying trade-off for her. “I didn’t realize how much pain I was in before I had the surgery,” Allison says. “It had just become something I lived with. Now, I can’t believe how good I feel and how well I can move. There is no pain at all."

“I know I am going to be stronger when I return to the field this summer,” she says. “While it was scary to have to go through surgery, it changed my life. No more pain. Plus I grew almost two inches in four hours—before surgery to after surgery!" 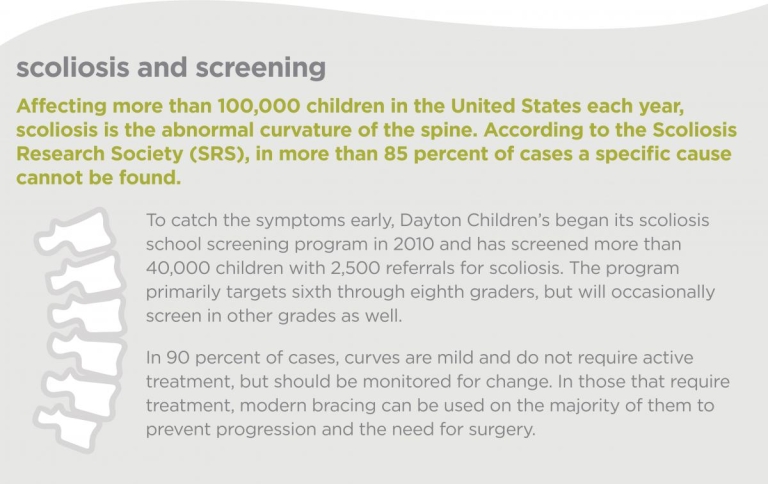 Few pediatric hospitals see as many pediatric patients with scoliosis and other spinal conditions as the spine center at Dayton Children’s. Families outside the region seek this expertise for scoliosis because of the customized care for each child, whether it be non-surgical, minimally invasive or an innovative procedure like the BandLoc surgery.

The degree of expertise offered at Dayton Children’s is essential when looking at a complicated surgery that typically lasts from four to six hours. Because the spine is three-dimensional, the surgeon needs to consider the placement of corrective mechanisms very carefully to ensure the best outcome.

Pioneered by Dr. Albert, the BandLoc spinal surgery procedure is designed to allow more efficiency in surgery and gain a better correction outcome. BandLoc is a specialized polyester implant that is used to improve spinal deformity and correction.

Entirely focused on the pediatric patient:

what does a Gait Lab engineer do?

The Gait Lab team at Dayton Children's includes a biomedical engineer. Learn more about what it means to be a Gait Lab engineer.