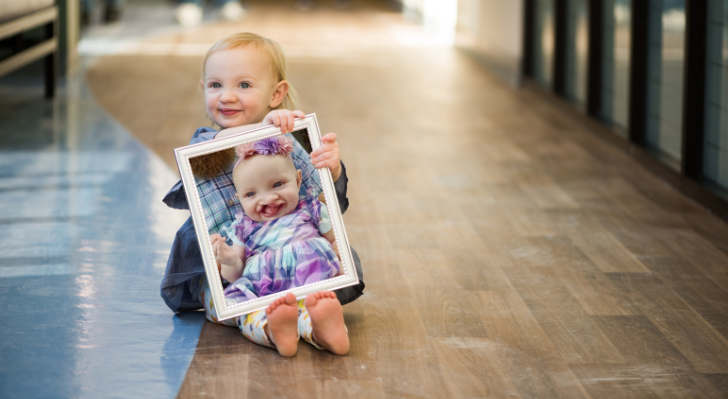 Abi has always had a beautiful smile before AND after surgery! 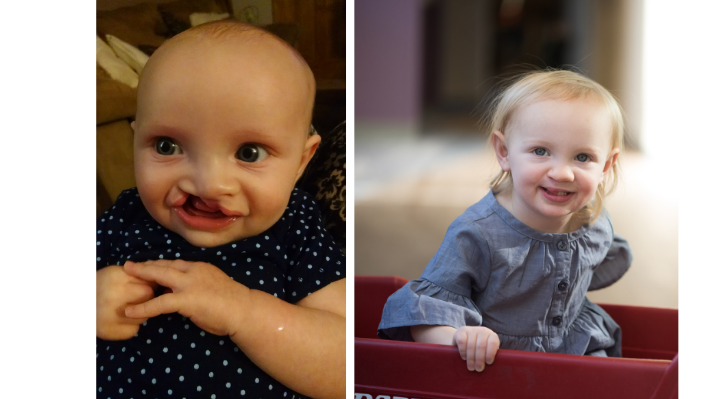 Before and after Abi had her cleft lip and palate repaired. 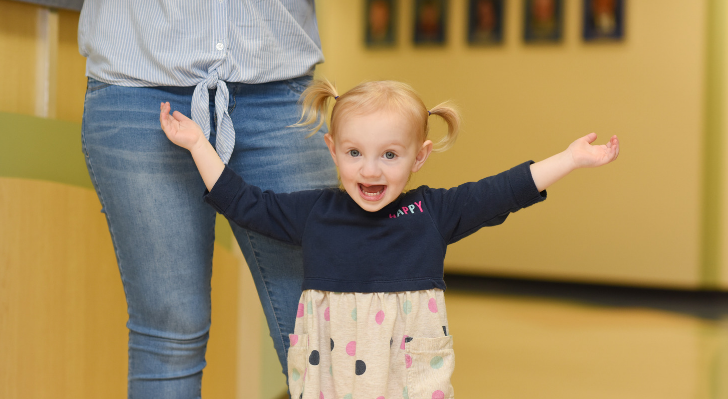 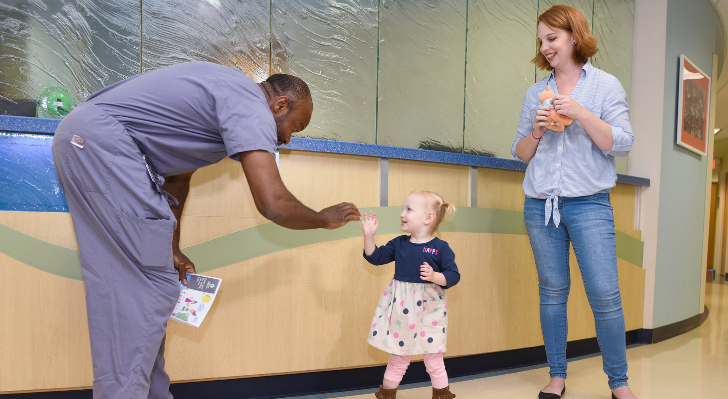 Abi gives a fist bump to Dr. Mancho who performed her surgeries.

thanks to you, Abi's story is just beginning 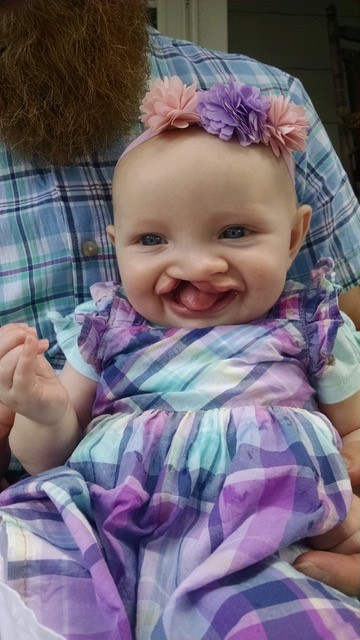 A prenatal ultrasound told Abi Kettering’s parents she would be born with a cleft lip and maybe even a cleft palate. The news came as a shock, but they didn’t let it get them down. They researched the birth defects online, met with specialists at Dayton Children’s and learned about some of the challenges Abi would face. But there was one thing they couldn’t prepare for: how cute she would be.

“When Abi was born she was just so adorable and squishy—it was easy to love her immediately,” says her mom, Mary, who lives in Xenia. “Her appearance didn’t faze us at all.”

Abi had what is called a unilateral complete cleft lip and a bilateral incomplete cleft palate. This meant that her face was open from the right side of her upper lip to under her nose, and her nose was stretched out flat. Her soft and hard palate (the front and back of the roof of her mouth) opened up into her nasal cavity. Birth defects like Abi’s can cause feeding problems, dental issues, speech and hearing difficulties, chronic upper respiratory illnesses and other concerns.

Abi was born on March 11, 2017, and aside from having to use a special bottle to drink her mom’s breast milk, she was—as Mary says—a perfect baby. When Abi was about a month old, Mary and her husband, Kyle, brought her to Dayton Children’s for an evaluation with the cleft lip/cleft palate team. This included appointments with Salim Mancho, DO, a pediatric plastic surgeon who specializes in craniofacial malformations such as cleft lip and cleft palate; Eileen Kasten, MD, a developmental pediatrician; and specialists in genetics, nutrition and speech-language pathology. Abi laughed and smiled the whole time, on a day that Mary describes as amazing.

“Dr. Mancho sat down with us at the end of the evaluation, and I had a huge list of questions for him,” Mary says. “Every plastic surgeon is different, and we wanted to know exactly what to expect. Dr. Mancho is so good about making you feel he has all the time in the world.”

Dr. Mancho’s plan was to fix Abi’s cleft lip and nose first, then do a separate surgery to repair her cleft palate. The first surgery was scheduled for July 10, 2017. Even though Mary and Kyle felt confident in Dr. Mancho’s skills, they were understandably nervous. “Dr. Mancho is a perfectionist, and I had a lot of confidence in him,” Mary says. “But still, it was hard to hand Abi over to the nurses and know that she was going to be under anesthesia.”

is this really Abi? 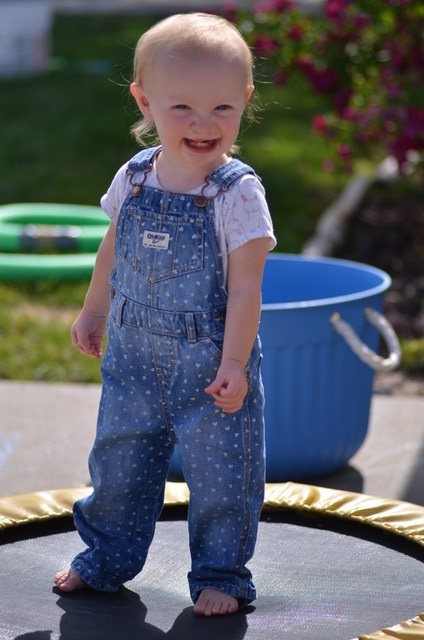 The three-hour surgery was a success, giving Abi’s nose and lip a more symmetrical appearance. For Mary, the biggest change was in Abi’s smile, which was so much smaller now because of the surgical repair. “For the first few weeks after surgery, she was quiet and not really herself,” Mary says. “Sometimes I would look at her and think, is this really Abi? But then as her joyful personality came back, I could see her again. She is just the sweetest little thing, and so resilient.”

A few months later, Dr. Mancho did surgery to close Abi’s cleft palate, a much more complex and delicate procedure with a longer, more difficult recovery. Closing the palate would allow Abi to create suction with her mouth so that she could eventually eat and speak normally.

the gift of speech

The first week after surgery was tough for the Kettering family, especially Mary, who worried about Abi’s lack of appetite, pain level and the healing process. But in time, Abi was back to her old self again. Now she is officially a toddler and doing great. “She eats a ton, sleeps well and has a joyful spirit that is really special,” Mary says. “With the help of our speech therapist, she is learning how to make different sounds and communicate with new words. Dr. Mancho gave her the ability to speak, which I think is incredible.”

Abi may need more surgeries to provide stability to her palate as she grows, as well as extensive dental work to keep her teeth in alignment as she grows up. Meanwhile, the Ketterings think she is perfect just the way she is. “Abi is the youngest of our three children, and I have always told our other two that God makes every person different and that he likes variety,” Mary says. “This has been a challenging experience for our family, but it’s also been a blessing. The team at Dayton Children’s has been a part of that, and I hope they know how much we appreciate them.”