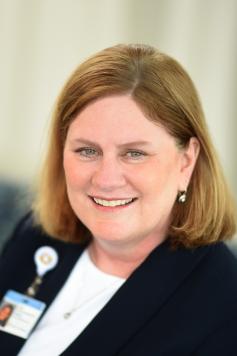 Libby Nicholson is the director of CARE House, the Montgomery County children’s advocacy center for children and families affected by child abuse and neglect. Throughout her career, Libby has worked to protect the community’s children. Her experience as a social worker at Montgomery County Children Services and at Dayton Children’s showed her the need for a coordinated response to child abuse. Through her participation on the Child Protection Task Force, she learned of children’s advocacy centers. CARE House opened in 1999 with Libby as its director. Since then, over 8,000 children have received services.

Libby is also the 2013 recipient of the Brother Raymond L. Fitz Award which honors someone who exemplifies Brother Ray’s dedication to nurturing and protecting children and families by his or her daily efforts in the community.

If you are interested in speaking to one of our leaders or experts at Dayton Children's please contact Stacy Porter at 937-641-3666 or by email at porters@childrensdayton.org.