the happiest kids in the world

Children living in the Netherlands are the happiest kids in the world according to a 2013 UNICEF report, with American kids ranking 26th out of the 29 industrialized countries in the study. 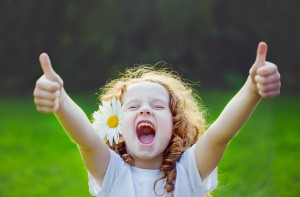 This conclusion is based upon UNICEF’s evaluation of five key aspects of children’s well-being---housing and environment, behaviors and risk, education, health and safety, and material well-being.

Many of these indicators reflect objective measures such as kids’ educational achievement, housing situation, eating and exercise habits, and participation in risky behaviors such as smoking and drinking.

In addition, children were administered a test of self-reported happiness. There was a close connection between those two measures. When asked about their life satisfaction, Dutch kids ranked first, with 95 percent of the youth considering themselves happy. American children came out in the bottom third of the survey.

Can we learn anything from the Dutch? A fascinating book by two women (Rina Mae Acosta and Michele Hutchison), one American and one English, who are married to Dutch men and living in the Netherlands suggest we can. The tricky part is trying to determine what aspect of the Dutch culture is responsible for raising such happy children.

The overall economic and social environment of this country of 17 million people makes it less stressful for families to raise children. With an average work week of only 29 hours, it’s easier to deal with the many responsibilities of caring for kids.

Acosta and Hutchison identified aspects of the Dutch culture that may also be responsible for happier kids. These include such factors as Dutch babies getting more sleep, little homework in the elementary grades, family meals, and lots of contact with both mothers and fathers. Dads are very involved in raising their children.

The authors reported that Dutch have a different mentality when it comes to raising their kids. Children are allowed more freedom to play unsupervised, and parents don’t focus so much on academic achievement and being better than others. Accomplishments matter, but the Dutch believe that happiness leads to accomplishments, rather than vice versa.

With a focus on exercise, independence, and a more carefree lifestyle, Dutch children ride their bikes regardless of the weather and adjust accordingly. The authors quote one mom who remarked that “There’s no such thing as bad weather, only bad clothing.”

When is the last time you’ve heard an American parent talk like that?

Their book is titled “The Happiest Kids in the World.” It might just make you want to take your kids out for a walk in the rain!