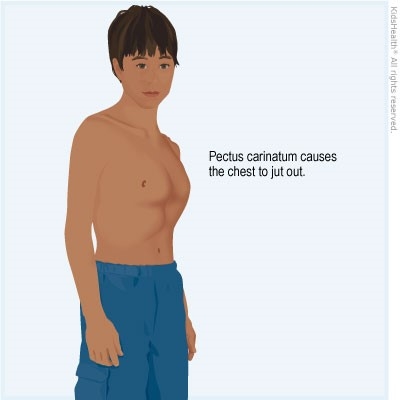 Pectus carinatum is a genetic disorder of the chest wall that makes the chest jut out, This happens because of an unusual growth of rib and breastbone (sternum) cartilage. The bulging gives the chest a birdlike appearance. The condition is sometimes called pigeon breast or pigeon chest.

Doctors don't know what exactly causes pectus carinatum. In some cases, it runs in families.

what are the signs and symptoms of pectus carinatum?

A pushed-out chest is the main sign of pectus carinatum. This usually doesn't appear until a child is 11-years of age or older, even though the condition is present at birth.

The chest wall surrounds and protects the heart and lungs. So kids and teens with pectus carinatum may:

Some children can develop asthma or get a lot of respiratory infections.

The condition gets worse as kids grow, and affects boys more than girls.

how is pectus carinatum diagnosed?

Health care providers diagnose pectus carinatum based on an exam and a child's medical history. If needed, they might also order tests such as:

how is pectus carinatum treated?

Kids and teens with mild pectus carinatum might not have breathing problems or worry about their appearance. If so, they don't need treatment.

Kids whose bones are still growing can wear a chest brace. Much like how braces realign teeth, a chest brace will push the breastbone back to a normal position. They can remove it for sports, showering and other activities, but typically need to wear it for at least 23 hours a day at first and then a minimum of 8 hours a day once the initial phase has concluded.

what type of bracing does Dayton Children's use to treat pectus carinatum?

The new bracing technology utilized by Dayton Children's surgery team is custom-made for each patient and adjusted using a pressure monitor. Previously, any adjustment had to be made manually by tightening the brace itself. Now, adjustments are made with the help of a pressure measuring device that measures compression of the chest in pounds per square inch (PSI).

The new brace provided to Dayton Children's patients is also easier to wear, less bulky and has to be worn for only half the time than the bracing traditionally used to treat pectus carinatum.

01/23/23 | blog post could it be a thyroid problem? symptoms of thyroid problems in kids
02/01/23 | event grand rounds - Craniosynostosis: why early diagnosis matters

the importance of collaborating with people on programs that impact them