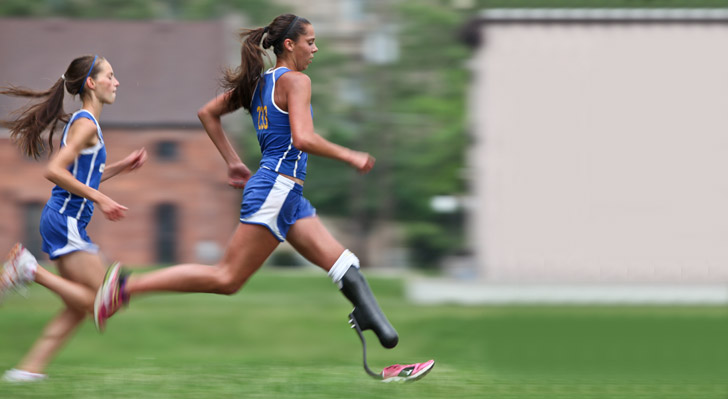 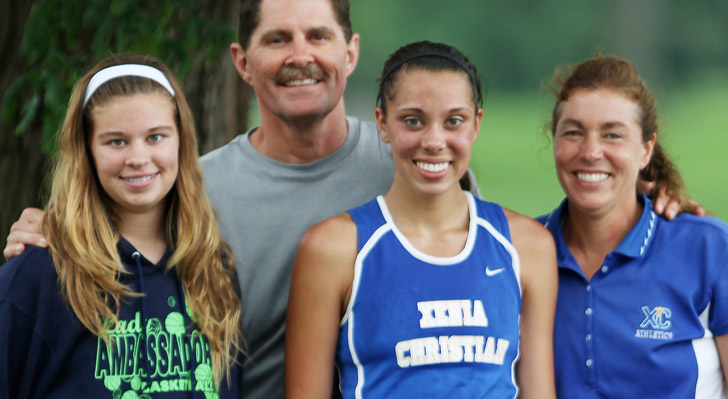 Grace Norman and her family 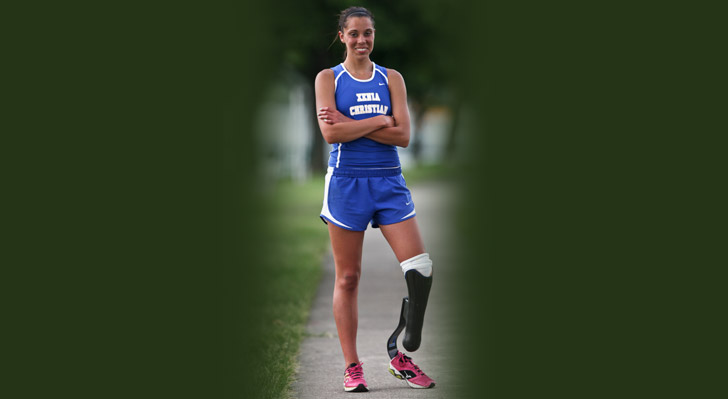 The scent of Icy Hot® hangs in the air like a warm blanket, greased on the runner’s legs. They line up at the start line. You can smell the track; rubber laced with sweat. A few slap their thighs to get their muscles twitching and ready to run. When the gun goes off, one runner leaps forward with more spring in her step than the rest, her hot pink running spikes hit the ground, one laced up over a prosthetic leg, known as a cheetah foot.

Running is about practicing your strengths, fixing your weaknesses and making every race count. For 16-year-old Grace Norman, the biggest misconception about her running is that she’s slow.

Grace is training with the hope to be part of the 2016 Paralympic Games in Rio de Janeiro. She was recently contacted by the USA Paralympic track and field committee about running the 400-meter event and the triathlon.

Olympic hopeful ready to take on the world

“Grace has a ‘take-on-the-world,’ competitive attitude,” explains Robin Norman, Grace’s mother and track coach at Xenia Christian where Grace is a sophomore. “With race times faster than many runners with two legs, people have stopped assuming that she’s slow.”

Born into a family of runners, Grace was destined to run. Her mother Robin ran track in college and her father Tim is a runner and avid triathlete. Grace’s older sister Bethany runs track at Cedarville University and her younger sister Danielle runs junior high track.

At birth, Grace was diagnosed with congenital constriction band syndrome of the left leg, a fetal abnormality. As a child with this condition grows, the congenital constriction bands make creases in the tissue. Most bands only affect the soft tissue, but some can go as deep as the bone. Bands happen most often around the baby’s arm or leg. No two cases are exactly alike, and the condition affects just 0.1 percent of newborns.

Mild cases may result in a crease on the limb. More severe cases can compress blood vessels and limit growth to the limb, often resulting in amputation.

Grace had a more severe case and was fitted with her first prosthetic leg when she was 13 months old.

Like many kids, Grace started playing soccer when she was little. “I would always warn the soccer coach to have duct tape on hand; you never know when a prosthetic leg is going to break and has to be taped together mid-game,” explains Robin.

Grace started running track in seventh grade with a regular prosthetic, but she wasn’t getting the times she wanted. “A prosthetic limb changes your running gait,” explains Robin. “I knew if we could fix her gait and stride, her times would drop.”

Two years ago, the Norman family decided to stop by the U.S. Paralympic Trials in Indianapolis on the way home from a family reunion. That’s when the dream was born.

“A few of the runners encouraged us to look into a cheetah foot for Grace,” shares Robin.

Dr. Albert has treated Grace since her family moved to Dayton when she was age 5.

“The first time I tried on the cheetah foot, I flew forward with such speed and bounce that I scared myself,” Grace shares. “For the first time in my life I could flex my foot. It was like running on air. I remember thinking to myself, ‘I wonder how fast this thing can go?’”

Almost immediately after Grace was fitted for her cheetah foot, she was off and running.

“In less than 48 hours after receiving the cheetah foot, we had the OHSAA district cross country meet in Dayton,” Robin says. “Her time dropped from 24:17 to 21:47 for 3.1 miles. It was incredible.”

According to Dr. Albert, socket fit and alignment are vitally important when you have a prosthesis. “Socket fit is important because it connects the body with the prosthetic limb. You want to have limited movement of your limb inside the socket to ensure it doesn’t rub and irritate the stump. Alignment depends on the length of the limb, the level of amputation, body size and the ability to control the prosthesis.

Two years ago, Grace grew 5 inches in one year. At first, we thought she might have a stress fracture. However, the cause of her pain was rapid growth, which affects the fit and alignment of her prosthetic.”

According to Grace, fit can make or break your race. “I can tell if the blade isn’t aligned correctly, my knees start knocking and the bottom of my limb will get sore. The pads can also wear out.”

Dr. Albert, along with Optimus, the company that made Grace’s cheetah foot, have kept her up and running, often with race times faster than her peers. Grace’s personal best in the 800-meter race is 2:26:87.

“The coordination of Grace’s care team – Dayton Children’s and Optimus – has been key to helping her achieve this level of running – she can compete the same as any other student,” Robins shares.

Grace’s favorite event is the 800 and 3,200-meter relay with her Xenia Christian teammates Sarah Kensinger, Ariana Nelson and Mallory Stemple.

The team of four competed in the Ohio Association of Track and Cross Country Coaches high school indoor track and field championships at the University of Akron in March. The event made history: Grace was the first amputee to qualify for a statewide event in Ohio.

Grace came in seventh place in the individual 3,200-meter run at the meet. This event caught the attention of the U.S. Olympic Committee.

Grace has big summer plans, including competing in her first international competition, ITU World Triathlon in Chicago. Grace was named to the para-athlete elite list and will represent the United States at this event. Based on Grace’s sprint triathlon time in early June, she is number one in the nation for the para-triathlete category.

“Obviously I have goals and don’t know God’s plans for me, but I’m excited for my future,” Grace says. “I do hope other people–both able-bodied and amputees–can look at me and say, ‘You know what? Life is tough, but if this girl can make it, then I can make it.”

06/30/21 | news article the center for the female athlete innovative, multidisciplinary program only in Ohio to care for female athletes’ physical, nutritional and emotional health
08/13/21 | blog post backpack safety tips Could your child's backpack be doing more harm than good?