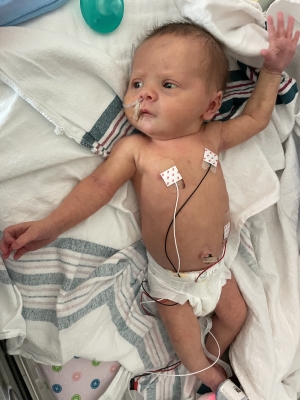 Chelsea was a veteran mom, delivering three previous healthy babies she assumed that baby number four, Finley, would be the same. However, Chelsea delivered Finley at only 35 weeks and at just two days old Finley was transferred from his birth hospital to Dayton Children’s Newborn Intensive Care Unit (NICU). Finley was suspected of having necrotizing enterocolitis (NEC), a serious gastrointestinal problem that mostly affects premature babies.

During the first five days in the NICU, Finley was strictly on IV fluids and antibiotics. After those five days, he had nasogastric (NG) feedings and was slowly introduced to a bottle. Finley also had jaundice, a condition that is common in premature and newborn babies, and was treated with phototherapy, a form of light treatment that helps minimize jaundice. This was not what Chelsea had become accustomed to when welcoming a child into the world.

Like any parent with three kids at home, Chelsea couldn’t be at the hospital full-time. The gap between mother and child was navigated by the medical team caring for Finley.

“The communication with Finley’s NICU team was phenomenal. If I was not available to be there when the doctors did their rounds in the morning, I always received a call about his plan of care for the day and any results from the tests done during the night.”

Feeding was a large concern for both Finley and Chelsea. The Dayton Children’s lactation specialists helped ensure Chelsea had everything she needed while she was pumping. After not being able to continue to produce enough milk due to being on hormones while pregnant, Chelsea stopped pumping after Finley’s first week in the NICU. “Even though I wasn’t producing enough milk, the lactation specialists made sure to let me know that it was okay, and that (Finley being) fed was best!” 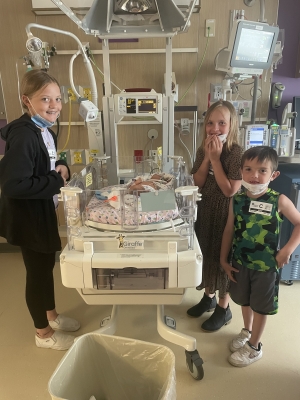 Finley’s first 16 days of life were spent in the Dayton Children’s NICU. During that time a natural bond was created between Chelsea and Finley’s caregivers. “The nurses were absolutely phenomenal and made sure that all of my questions were answered and that anything I thought Finley needed or I needed was taken care of,” said Chelsea.

“Finley had a nurse named Sharon Roche most of the days he was in the NICU. My kids and I fell in love with her. She always made sure to include my three other kids and to let them know what all was going on with their baby brother and explained things in a way they would understand. I got to know Sharon quite well and she will forever have a special place in my heart.”

Finely is now a thriving 5-month-old boy who enjoys all the attention his three older siblings give him. Chelsea is forever grateful for Finley’s care.