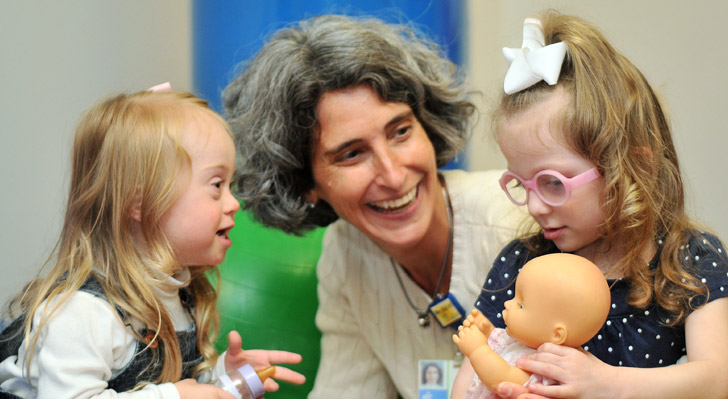 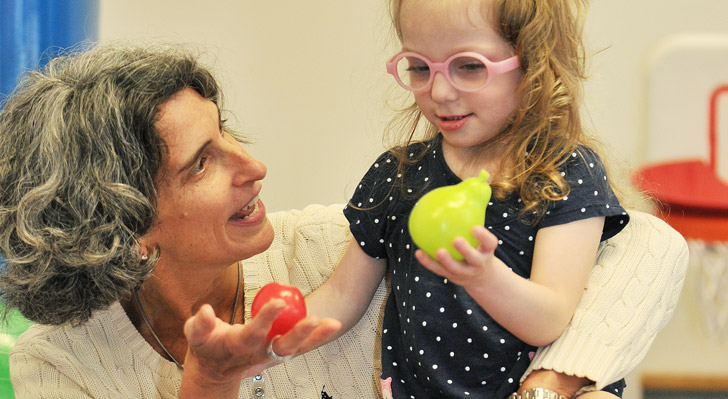 Gracie Albert and her physical therapist 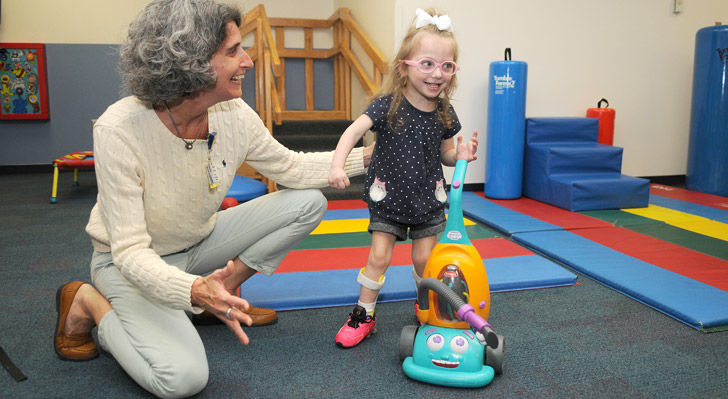 Gracie Albert and her physical therapist

hitting every milestone thanks to the right therapy

At age 4, the job of most kids is to just be a kid. But for Gracie Albert, learning to be a kid has a different meaning – Gracie has cerebral palsy. Though every child with cerebral palsy develops differently, early intervention and intense physical therapy, speech therapy and occupational therapy are vital to a child reaching developmental milestones like talking, walking, feeding and dressing herself, and even riding a bike.

“Gracie took six steps during a physical therapy session – her very first – at age 3,” shares Nicole, Gracie’s mom. “I just lost it, it was the best moment of my life – we never knew if she would reach this milestone.”

Born at just 2.5 pounds, Gracie suffered from a grade 4 brain bleed, which caused dangerous pressure on her brain. Though Nicole was told she would likely have cerebral palsy, their imaginations worked overtime with uncertainty and fear. At 9 months, she began to have seizures. “We didn’t know if she would ever walk, talk or be independent,” shares Nicole.

At less than a year old, she started an intensive regimen of physical therapy, occupational therapy and speech therapy.

“Grace is a spirited little girl with an incredible sense of humor,” shares Janet Squiers, manager of rehabilitation services and Gracie’s physical therapist. “She loves to play pretend, loves dolls and laughs and smiles, but it wasn’t always this way.”

When Gracie first started therapy, she couldn’t sit, use her right hand, stand or walk.

“Having hemiplegic palsy is similar to an adult having a stroke,” explains Janet. “When Gracie first started therapy, she couldn’t use her right side. But with proper intervention at a young age, the brain can build new pathways to reroute signals from the brain to the muscles to achieve developmental milestones.”

Through physical and occupational therapy, children like Gracie learn to incorporate play to learn how to use their body, which develops strength. Play and school are a child’s primary occupation. So therapy activities focus on tasks such as learning how to get dressed and putting on shoes, as well as fine motor skills like learning how to use scissors. For the past three years, Gracie has been receiving rehabilitation therapy services at Dayton Children’s.

“To improve her right side, she had a constraint cast placed on her stronger arm, which forces the weaker side to strengthen and improve,” shares Tiffany. “Before, she would use her arm like a bat, but after six weeks with the cast, she had significant improvement, like using her fingers to pick up and release objects.”

During therapy, she learns balance by doing activities such as standing and shifting her weight to reach for toys, stepping over obstacles on the floor and practicing getting up off the floor. She’s also practicing fast walking and safe falling.

Gracie also progressed from using a walker with braces on each leg to walking on her own with a brace on just one leg.

“She is such a great candidate for therapy because she participates in play, which helps her accomplish goals for therapy,” shares Janet. “Our next steps are to continue to work on things that will strengthen her and help her to have symmetry – having equal strength on both sides of her body.”

Speech therapy has also been an important component of Gracie’s overall care plan.

“When Gracie first started speech therapy, it sounded like she was having a complete conversation, but her words weren’t clear,” explains Tanya Sheel, MS, CCC-SLP, Gracie’s speech therapist. “So she would say ‘pony-o-roni’ for example versus pepperoni.” Today, through intensive speech therapy, Gracie’s skills are on par with age appropriate sentence length and structure.

“Gracie’s family has been the cornerstone to her success,” shares Janet. “They have always focused on the positives and accepted Gracie’s skills at every milestone. They are motivated to help her get to the next skill level. Therapy is hard work, and they are committed to her appointments and follow through on activities that are recommended for home, which has an enormous impact on Gracie and where she is today.”

After three years of weekly therapy, Gracie has become part of the rehab team. “She went from crying during therapy sessions to now not wanting to leave,” shares Janet.

Gracie’s mom Nicole describes the rehab team as Gracie’s second family. “From the moment we started therapy, they treated Gracie like she was their own child, like we were the only family in the world,” shares Nicole. “To have this type of care just 10 minutes from our home is incredible.”

03/10/22 | patient story impairment and impact of Ehlers-Danlos syndrome Unexplained pain lead Ashlynn to a life changing diagnosis
04/19/22 | blog post tantrum or meltdown? what's the difference? spot the difference and help your child with these tips

Could your child's backpack be doing more harm than good? Learn more about backpack safety.