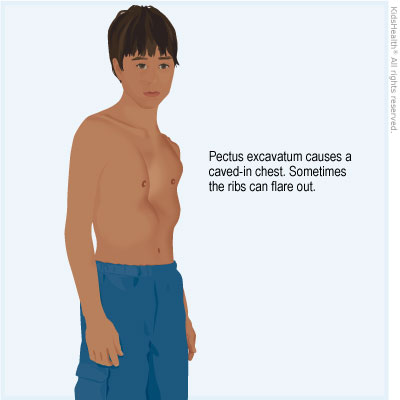 Pectus excavatum is a congenital deformity of the chest wall that causes several ribs and the breastbone (sternum) to grow in an inward direction.

Usually, the ribs and sternum go outward at the front of the chest. With pectus excavatum, the sternum goes inward to form a depression in the chest. This gives the chest a concave (caved-in) appearance, which is why the condition is also called funnel chest or sunken chest. Sometimes, the lower ribs might flare out.

Doctors don't know exactly what causes pectus excavatum. In some cases, it runs in families.

what are the signs and symptoms of pectus excavatum?

The main sign of pectus excavatum is a chest that looks sunken in. Even though kids who have pectus excavatum are born with it, it might not be noticed in the first few years of life. Many cases are found in the early teenage years.

Mild cases might be barely noticeable. But severe pectus excavatum can cause a deep hollow in the chest that can put pressure on the lungs and heart, causing:

how is pectus excavatum diagnosed?

Healthcare providers diagnose pectus excavatum based on a physical exam and a child's medical history. If needed, they might also order tests such as:

how is pectus excavatum treated?

Pectus excavatum can cause limitations to exercise and other physical activities or be completely harmless if it's not affecting how the lungs or heart work. Surgery often can correct the condition and treat any heart or lung issues. Physical therapy and exercises to strengthen muscles are also helpful.

what is Dayton Children's approach to treating pectus excavatum?

The surgery team at Dayton Children's has the experience, skill and modern equipment to treat patients with pectus excavatum.