is perfectionism a problem for your child? 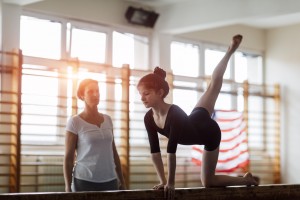 Alissa spends several hours a day trying to flawlessly perform her gymnastics’ routines. To a casual observer, her movements look amazing for a twelve-year old athlete. However, Alissa is critical of most everything she does in the gym, using that as motivation to fuel her passion for perfection.

It’s easy to dismiss such thinking as unhealthy, but the pursuit of excellence is what drives achievement in the sports arena, classroom, and all other areas of our lives. High achievers don’t settle for mediocrity. They push themselves to go beyond the self-imposed limits accepted by most people.

Encouraging kids to achieve excellence seems to be out of fashion, due to concerns that such pressure may cause kids distress and anxiety. However, why accept mediocrity from talented children? We need to help kids deal with pressure rather than raise them in a bubble wrap environment.

Here is how to tell if pursing perfection is a problem with your child.

1. Lack of perspective. Kids who respond poorly to pressure catastrophize any perceived imperfection in their performance. The same drive that causes them to excel may also result in exaggerating the significance of a poor gymnastics’ routine or a few missed items on a test. I ask these kids to fast forward their lives a few years, and then reflect upon the insignificance of their immediate concerns.

2. Focus on the negative. The best professional baseball players get a hit only about 30 percent of the time. Michael Jordan’s shooting percentage was around 50 percent, meaning that he was a “failure” half of the time that he took a shot. Kids who have difficulty dealing with pressure get overwhelmed by failure. Successful athletes, as well as outstanding performers in all areas of life accept frequent failure as the cost for high expectations and achievement.

3. Easily frustrated. I coached a young basketball athlete who got upset at himself and his teammates whenever a play did not result in a score. His behavior was more annoying than motivating. Pursing excellence doesn’t mean you need to belittle others or get upset at yourself when things aren’t perfect.

4. Overwork. Superior performers work hard, and are willing to sacrifice a great deal for the sake of an extraordinary level of achievement. However, they also maintain a sense of balance in their lives, remembering the importance of relationships and taking good care of themselves.

Don’t be concerned about encouraging excellence in your child. Teach your kids how to handle the stress of being an outstanding performer rather than allowing them to settle for a life of mediocrity.