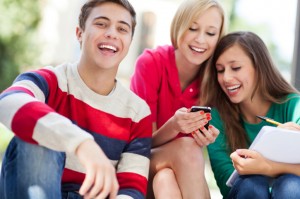 Parents are pretty clueless when it comes to knowing about their teens’ online lives, according to a survey by the National Cyber Security Alliance. Based on a study of parents and 13 to 17-year-old teens, our kids are living in digital worlds unknown to their families. It’s an existence with both pleasures and pitfalls.

60 percent of our teens have downloaded apps or created fake accounts on social media sites without their parents’ permission. Facebook has been replaced by Snapchat and Instagram as the most popular media sites.

28 percent of kids say their parents have no rules about their internet usage. Even when there are rules, only 13 percent of teens reported that their parents are completely aware of their digital lives.

Previous research has indicated that teens interact with the digital world for the same reasons as the rest of us. They find it entertaining, educational and a source of emotional support. Even so, these benefits come with risks. 39 percent of teens reported that someone has been cruel or mean to them on the internet. When problems arise, they are most apt to reach out to other kids, not their parents.

What parents think about their kids’ digital lives is very different from what their kids actually do. For example, 50 percent of parents reported that teens must share passwords with them, but only 16 percent of teens reported having that rule in their family.

It’s time to rethink our traditional approach of monitoring and punishing. First, this is extremely difficult to do. Second, even when there are rules, teens reported that we don’t enforce them.

Since 62 percent of online teens indicated that they spend at least 5 hours on a typical day interacting with their media devices, we’ve got to figure out how to keep them safe. Our kids are concerned about privacy, exposure to hateful or inappropriate web sites, and mean messages they receive about their behavior or appearance.

Maybe we should accept what we can’t control, and acknowledge that teens will have a digital existence that’s private from us. However, let’s help them deal with the hazards of that world.

Talk about these issues at the dinner table. Discuss how to respond to the challenges of social media. There are lots of examples as to how famous people use, misuse, and interact with social media. Use these stories as opportunities to discuss navigating troublesome situations.

One final bit of advice from teens: if you want to engage kids in a discussion, drop the self-righteous attitude and be willing to consider viewpoints different than your own. That might just be the ticket to gain you entrance into your child’s digital world!