Dayton Children’s is celebrating physicians and a state leader who put the well-being of children first in all they do.

Daniel Lacey, MD, PhD, was named winner of the Wallace B. Taggart Award, the highest physician honor. It is given to someone who lives up to the standards set by its namesake, Dr. Wallace B. Taggart, who worked alongside Dr. Alan Shafer and Elsie Mead to establish Dayton Children’s in 1967. 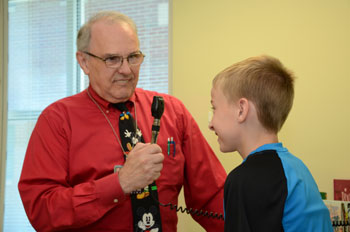 Dr. Lacey is a pediatric neurologist and lead physician on chronic pain and headache management programs, as well as a leader in concussion management. In the past 31 year, he grew the neurology department from a staff of one to a team of dozens. He is a champion of care for his patients, finding new ways to treat and care for them, introducing innovative techniques. He also is a keen researcher, discovering an epilepsy syndrome called benign infantile-neonatal syndrome which is part of the International League Against Epilepsy classifications. Dr. Lacey has been named to the Best Doctor’s in America list five years in a row and won the Distinguished Service Award in 2014.

Trips to Dr. Lacey’s clinics may look more like Cirque de Sol or even a zoo. He is either chasing the children around the room, or they are chasing him. He believes the best way to examine a child’s cranial nerves, strength, stamina, gait and mental status, is in a one minute “play” examination. Not only does this give him all the information he needs, it’s a much better experience for the child and family! For his commitment to his patients and to finding better ways to serve them, Dr. Lacey is this year’s winner of the Wallace B. Taggart Award.

This award was first introduced in 2010 as a way to recognize members of the professional staff who exemplify outstanding service to their patients, Dayton Children’s and the community. It was renamed the Alan D. Shafer, MD, Distinguished Service Award in 2013 to honor his significant support and contributions. Dr. Shafer was instrumental in making sure that there was a children’s hospital here in Dayton and performed some of the very first surgeries. The following honorees exemplify the highest quality in pediatric care and have made a significant contribution to the mission of our hospital.

Douglas Prince, MD, is an emergency department physician and responsible for ensuring the ED is staffing 24/7, 365 days a year. Since the mid-70s he has recruited more than a 100 quality physicians to work in the ED. For the first 22 years of his tenure he served as medical director. His focus has always remained on how to best serve the patient and family. Efficiency, commitment and focused vision have always been important to him. He predicted the H1N1 surge long before it ever hit Ohio, making sure the emergency department was prepared ahead of time.

Bob Myers, DO, is a pediatrician at Contemporary Pediatrics in Centerville. He is a tireless advocate for his patients, ensuring his kids get the specialty care they need at Dayton Children’s. He stays on top of their problems and their treatment, even still rounding on his patients when they are at the hospital. He also is a leader in the hospital, serving on numerous committees over the years, and a leader in the community, especially in finding a cure for diabetes, which has personally affected his son’s life.

Paul Breyer, MD, is the medical director of the endocrinology and diabtetes department at Dayton Children’s. During the past ten years, Paul built the department from a physician of one to a thriving team. Dr. Breyer sits on a number of committees at Dayton Children’s, offering insightful observations and innovative solutions to problems and issues at the hospital. Those who work with him know he is also a lovely human being with great knowledge, humility and empathy.

This honor is presented every two years to members of Dayton Children’s professional staff and also, when warranted, to a community, state or national leader. To receive this honor, one must demonstrate outstanding efforts on behalf of children and must lead in the development of programs that improve the health and well-being of the children of the Miami Valley.

James Lehner, MD, is an orthopaedic surgeon and has been a member of the professional staff for 30 years. He brought state of the art pediatric spinal deformity surgery and correction to Dayton Children’s. He has been a member of almost every committee at Dayton Children’s at one point in time or another, as well as serving as a board member for United Rehabilitation Services and Goodwill Industries, president of the Pediatric Orthopaedic Society of North America, and chair of the Community Blood Center.

Lori Vavul-Roediger, MD, has been the medical director of child advocacy since 2006. She is a tireless advocate for children who have been victims of abuse or neglect. She is their voice, even testifying in court on their behalf, working to defend them and put them on a better path in life. She is the force for positive change for these children, bringing tremendous effort and medical skill to help abused children, raise awareness, advance solutions and make meaningful progress. By educating the next generation as an assistant professor at Wright State, she is also instilling a sense of responsibility to recognize the warning signs of abuse and act as a child’s advocate and defender.

Ohio Senator Peggy Lehner has a passion for health care and education issues and has been nationally recognized for her leadership in these areas. Senator Lehner has been in the Ohio Senate since 2010 and prior to that served as Ohio State Representative and a member of the Kettering City Council. She chairs the bi-partisan, bi-cameral Children’s Caucus – a group of legislators committed to advancing the health and well-being of Ohio’s children through unified legislative action… a group that she created in 2013. She is also especially committed to providing pre-school education for at-risk children.