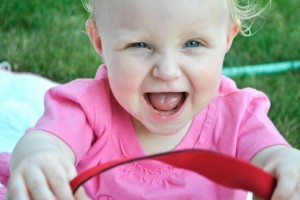 So I've accepted it and I'm ready to share with all of you about our experience - really in hopes of sharing a few lessons I learned along the way.

As you know, Mary is a breath-holder, and last May while my parents were visiting for the weekend Mary was off her nap schedule. She was running around the room and hit my knee with her head. She immediately went into her breath-holding spell and I responded as normal waiting for the typical 5-6 seconds before she "came back" after passing out.

However, she never came back...within a few seconds of passing out all four of her limbs started moving all at once, up and down. Her eyes were glazed over - she wouldn't respond to my calls. Immediately my mom called 9-1-1. The dispatcher told me to put Mary on the ground to let her continue the episode. I was on the phone about 90 seconds (I asked the dispatcher how long I was on the phone) and then Mary started to come out of the episode - although she still didn't recognize me. That's the worst feeling in the world!

Within a few minutes, the squad arrived and they loaded Mary into the back of the ambulance. We rode to Dayton Children's, Mary still not recognizing me and crying faintly. When we arrived at the hospital she had a slight fever and vomited. After some blood and urine tests, she finally feel asleep. Still with eyes unfocused and unfamiliar.

About an hour later she woke up, she recognized me - my Mary was back! We stayed in the emergency room for another few hours so they could watch her but we went home later that evening.

Since neither the physician or the medics saw Mary in the seizure state they couldn't officially diagnose that as such. However, the physician gave some really good advice. He said, should this happen again and I think to do it - take a photo or video with my phone. This wouldn't be to post on YouTube - or this blog - but for a medical professional to really see what was happening would have been helpful. This is something I filed away for any future scenarios.

Mary hasn't had any of these episodes since. I'm not expecting her to. It could have been the fever or her breath-holding that caused it - or both - or neither. After doing some research, I learned that 10% of children have one seizure in their lifetime - and in many cases it never happens again. It was a scary ordeal but I've accepted it and I'm moving on!