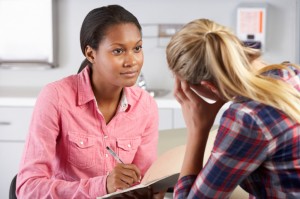 The first few therapy sessions generally go pretty well with most kids and parents. We can usually change problematic behaviors with most children fairly quickly by setting up systems of incentives and penalties.

This is a dramatic departure from traditional therapies. The old way was to engage kids in an endless and useless discussions of their feelings, and hope that their behaviors would improve. It rarely worked.

The second stage of therapy is more difficult. You can’t reward and punish kids indefinitely. At some point, children need to develop the self-control to do the right things. This is not about changing behavior or feelings, but rather challenging and correcting kids’ self-defeating and erroneous patterns of thinking.

If I can help children change their internal cognitions, artificial reward and punishment systems can be eliminated.

We are always talking to ourselves, regardless of our level of awareness of these messages. Beginning in early childhood, we develop a set of beliefs that influence the way we act.

Here are the most common mistaken beliefs that kids bring into a therapy session.

Once kids start thinking about the world in a positive and empowering way, long-lasting changes occur.