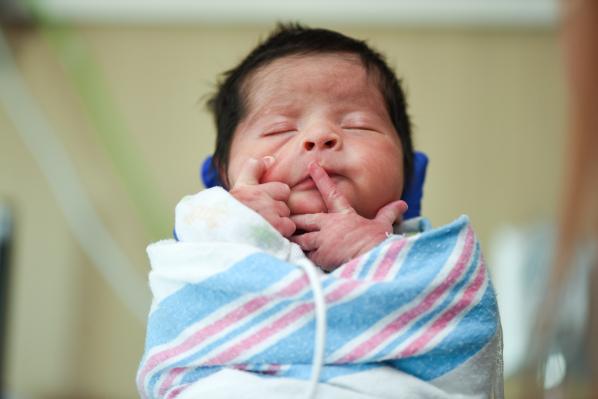 Ryan was rushed to the emergency department at just a few days old. 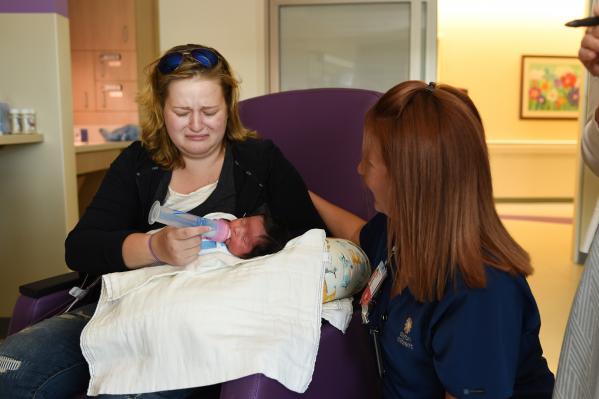 Alison receives the news she anxiously awaited - Ryan was negative for cystic fibrosis. 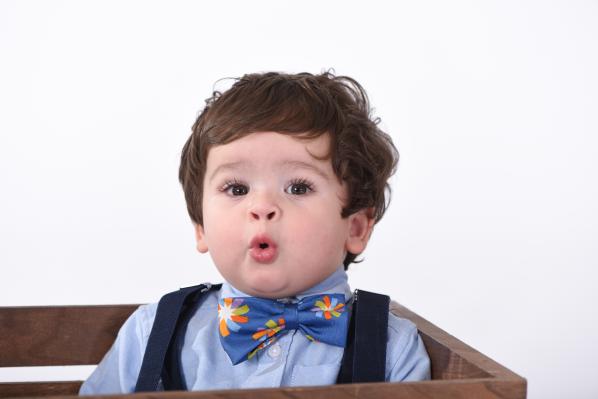 After a rough start in life, Ryan is a happy and healthy 1 year old!

Ryan is thriving despite a rough start in life

The sound of her phone ringing at 4 in the morning jolted Alison Deady-Schiml from a deep sleep. In the predawn darkness, her brain struggled to comprehend what the doctor was saying to her: Ryan isn’t doing well. We have to transport him to Dayton Children’s.

Ryan, a preemie, was in the NICU of a local hospital. Alison and her husband, Andy, had kissed their baby goodnight just hours before and headed home for some much-needed rest. The first four days of his life had been tough.

That phone call began the most difficult day of Alison’s life—worse than any she endured during 16 rounds of chemotherapy for aggressive breast cancer two years earlier. Worse than the day doctors told her she probably would never become pregnant because of cancer treatment.

“Ryan was our miracle baby, and after all we had gone through, the possibility of losing him was devastating,” says Alison, 27. “I was inconsolable.”

a calm and capable team

As she rushed to leave the house, the phone rang again. It was a Dayton Children’s nurse calling from the ambulance to reassure Alison that Ryan was in good hands. The Schimls packed their bags hurriedly and began the 30-minute drive from their home in Springfield, Ohio, to Dayton Children’s.

They arrived at the hospital to find a calm and capable team caring for Ryan. Tests revealed the cause of his symptoms: a painful bowel obstruction. Later that morning, pediatric surgeon Arturo Aranda, MD, performed surgery to relieve the obstruction, and Ryan was admitted to the hospital’s newborn intensive care unit (NICU).

Although the surgery was a success, Dr. Aranda told the Schimls he was concerned that the symptoms Ryan had experienced could point to a diagnosis of cystic fibrosis (CF). CF is a rare, genetic condition that causes mucus buildup in the lungs, pancreas and other organs. It can lead to major problems with breathing and digestion, and there is no cure. All newborns are screened for CF, but getting test results can take more than a week. As Ryan recovered from the bowel obstruction and surgery, the Schimls settled into a new routine, unsure of what the future would hold.

learning how to be ryan’s mom

It had been a long road—during her second trimester, Alison had been diagnosed with gestational diabetes. At 28 weeks, she had gone into early labor, which doctors were able to stop with medication. Five weeks later, in August 2017, before Alison and Andy had even had a chance to set up his crib, Ryan made his early arrival.

“Every day, I’d sit with Ryan in the NICU and just gaze at him, hoping and praying he didn’t have CF and could come home soon,” Alison says. “As a new mom to this sick child, I felt so lost at first. The nurses were wonderful about showing me how to change him and feed him and work around all the equipment and technology. That was just phenomenal. They made me feel comfortable and gave me confidence.”

Andy came to the hospital every day after work, often accompanied by close family members. More often than not, Alison stayed overnight in Ryan’s room.

Despite the stressful circumstances of those three weeks in the NICU, Alison remembers feeling safe and even at home.  “We felt surrounded by support,” she says. “The doctors and nurses were really honest with us and always kept us informed about how Ryan was progressing. I kept telling myself, ‘If he has CF, we’ll get through it together.’”

Thankfully, Alison never had to test that belief: results for CF were negative. She and Andy could finally start preparing for Ryan to come home.

“We have been through a lot, but it’s obvious that Ryan is a fighter, just like me,” says Alison. “By the time we left the hospital, he was doing well with his feedings and didn’t need a feeding tube or other special equipment.”

Now, more than a year later, Ryan continues to amaze and delight his parents. As a preemie, he still has some catching up to do on his developmental milestones, but his smile has a way of lighting up the room.

“When we were in the NICU, Ryan received a cute little knit hat and blanket that someone had donated,” Alison says. “I look at them now and they make me smile. They are a reminder of where we’ve been and how far we’ve come.”