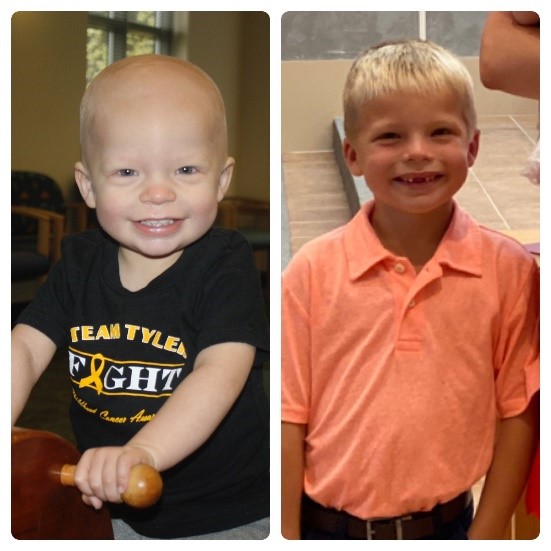 “Tyler has an appointment with the oncology department at Dayton Children’s tomorrow morning at 8 am” is not the phrase any parent wants to hear. But those were the words that came across the phone as his parents, Nicole and Luke Kaspari, were driving home 20 minutes after their 18-month-old son’s ultrasound.

After finding a bump on his stomach when tickling him one night, they consulted his pediatrician at his 18-month well check. “Seems pretty normal, but there is a bit of a nodule there, so we’ll order up a quick ultrasound just to make sure everything is ok,” Nicole recalls the pediatrician saying. “Unfortunately, everything wasn’t ok.”

Dr. Mukund Dole, MD, Dayton Children’s pediatric hematologist/oncologist, told the Kaspari's that Tyler’s diagnosis was likely hepatoblastoma, or cancer of the liver. “The symphony that Dayton Children’s orchestrated from there was nothing short of amazing,” says Luke. “They were professionals, and we were in good hands.”

That morning, after receiving a roughly two-hour crash course in childhood cancer, Dr. Dole briefed them on the plan of action. While it was a heavy blow to find out their otherwise healthy toddler likely had a cancerous tumor on his liver, they left the hospital feeling as confident as possible with the whirlwind that was ahead.

After a biopsy and a series of tests with Dr. Arturo Aranda, MD, division chief pediatric surgery, they learned Tyler’s tumor was a genetic defect that happens naturally in 0.8 kids out of 1 million. The tests indicated the tumor was malignant and it was nestled right next to the main vein in Tyler’s liver, which would require a precise surgical procedure to fully remove the tumor. The plan: two rounds of chemotherapy to shrink the tumor to a size possible to operate on, surgery to resect the tumor, and two rounds of post-operative chemo to ensure any stray cancer cells were destroyed.

Tyler’s first two rounds of chemo went as planned, shrinking the tumor to a size that would allow Dr. Aranda and his team to operate. Surgery took 10 hours, in which the team removed 71% of Tyler’s liver (luckily you can take up to 75% and the liver will still completely regenerate). Tyler’s second two rounds of chemo were quite a bit tougher on him given his weakened state, but they accomplished exactly what was intended. After six months of constant hospital visits and overnight stays, Tyler’s tests came back stating “no evidence of disease” – exactly the news his family and care team wanted to hear.

Today Tyler is five years in remission, and aside from moderate hearing loss from chemotherapy, he is a healthy seven-year-old boy.

“While Tyler was fortunate in his journey through cancer, many children are not,” says his mom. “Our six months of hospital stays opened our eyes to the challenges and treatments that children should never have to go through.” It was because of this that during Tyler’s treatment, the Kaspari's paired with the National Pediatric Cancer Foundation to make an impact on the future of childhood cancer. With 43 kids diagnosed with cancer every day in the United States, the Kaspari family hopes that sharing their story and bringing awareness to childhood cancer will help to one day bring an end to pediatric cancer and allow more kids to live happy, healthy lives.