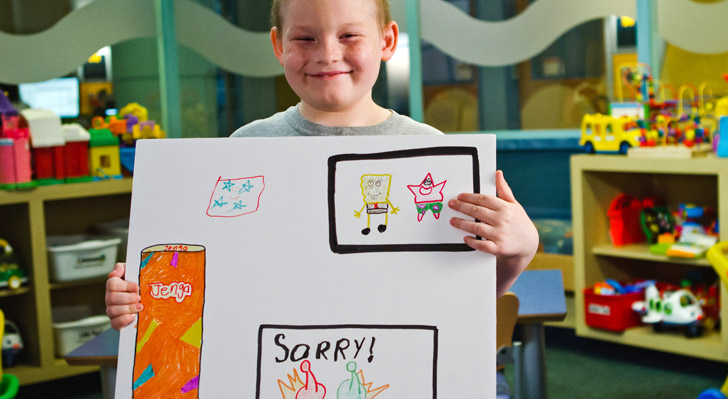 Adrienne and Jason Duplechian are no strangers to Dayton Children’s Hospital. Adrienne has been a dedicated employee since 2005, most recently as an EEG tech in neurology. She is well aware of the concerns and questions that many parents have when they have to bring their child in for testing. She never thought that she would be on the other side as the mom of a patient; scared and with her own questions and fears.

At the beginning of 2012, Adrienne and Jason were worried about their son Gabe. Their 7-year-old was experiencing a lot of pain in his bones and joints along with swelling and fractures not caused by injuries. The Duplechians’ were looking for answers. After three long months of searching, Gabe was finally diagnosed with B-cell acute lymphoblastic leukemia with bone involvement. While his official diagnosis was made at Cincinnati Children’s, the Duplechians had a decision to make of where to continue with Gabe’s treatment.

“Dayton is home,” says Adrienne. “We knew as soon as Gabe was diagnosed that we had to come back to Dayton Children’s for his treatment. We trusted the care here and wanted to be close to our family and friends.”

Gabe began a three-year treatment plan with Mukund Dole, MD, in the hematology/oncology department at Dayton Children’s. To this day the Duplechian’s see Dr. Dole as a trusted family member.

Today Gabe is in third grade at JFK Middle School in Kettering. He still has two more years of treatment left but thanks to the doctors and nurses at Dayton Children’s, Gabe never complains about coming in for his chemo.

“Every nurse treats Gabe like he is their own child. They show him dignity and respect and even though he is only an 8-year-old boy, they let him know what is going on and what is going to hurt. Dr. Dole and the nurses put Gabe at ease and this has helped him so much to gain their trust and to not be afraid to get in the car and go for his treatment,” says Adrienne.

For Adrienne, Gabe’s treatments at Dayton Children’s has given her a new perspective as an employee. When she walks through the doors of the hospital she is no longer only an EEG tech, she is now the mom of a patient.

“It was really hard at first and difficult to wrap my mind around that ‘this is MY child.’ It has given me a new set of eyes when I go to work because I am now that mom. I have all these parents who come in for these scary EEGs and I can be that difference to ease their fears and let them know that there are people there to walk with them every step of the way.”

While Jason and Adrienne wish this had never happened to their son, Adrienne says they could not be prouder to have Gabe treated at Dayton Children’s.

“The staff at Dayton Children’s has turned bad experiences into good memories,” says Adrienne. “We would never consider leaving.”