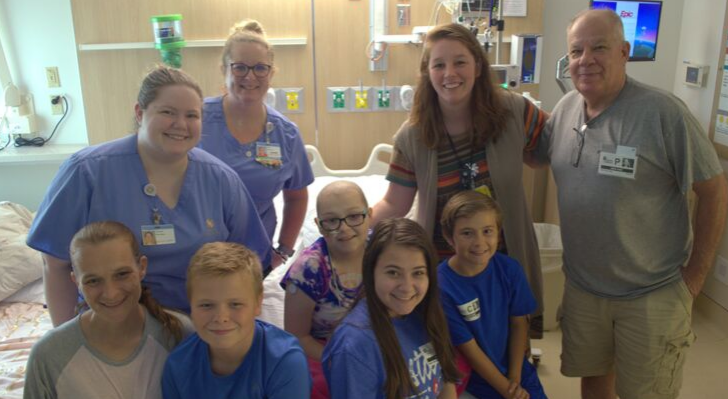 Kelcey and her family 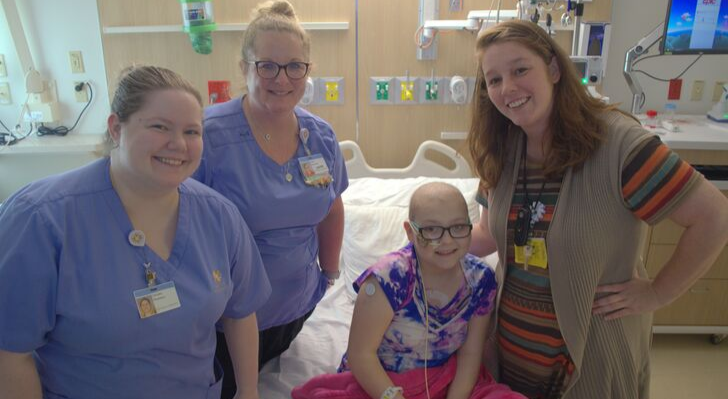 Having a child with cancer would be enough to deal with in a lifetime for most families. For the Belcher family, the Memorial Day tornadoes that destroyed parts of the Dayton area also demolished the medicine 14-year-old Kelsey needs to survive. They turned immediately to Dayton Children’s Hospital for help.

When the tornadoes twisted overhead that night, dad Gary, mom Shana, Kelsey and two of her brothers huddled in the laundry room of their Beavercreek home. “I told them to cover their ears because it was so loud,” she remembers. “I also had them close their eyes because there was so much debris flying around.” Crouched around the washer and dryer, they held each other, cried and prayed out loud as the storm raged around them.

“It ripped off the roof and the side of the house,” says Gary. “Our patio door was embedded in the front door at the other end of the house. Shana’s van was destroyed. Almost nothing was salvageable.”

That included Kelsey’s medication. She takes up to 10 medications a day to manage type 1 diabetes and also as treatment for leukemia, but the twister turned them inside out. “We couldn’t even find all the parts,” says Shana. “Child-proof caps flew off the bottles, the droppers for the liquids were ripped out, there was dirt and debris mixed in with the medicine – it was all unusable.”

Stress raises blood sugar levels so Shana knew Kelsey would need some insulin right away to help her recover after the storm, not to mention all her cancer-fighting drugs. “I called Dayton Children’s, told them what happened and said I didn’t know what to do. They said ‘don’t even worry – we’ll take care of you.’”

The social work department as well as Christin Dewitt and Dawn Ronnebaum, pharmacy technicians, didn’t waste a second. They contacted CareSource to get approval for emergency supplies of the medications Kelsey needed and delivered them to her.

This wasn’t the first time Dayton Children’s staff helped the Belchers. “When Kelsey was first diagnosed, Christy helped us afford the move into a more suitable home for Kelsey - the same home the tornado destroyed. We had just moved in February,” says Gary.

“Going through cancer treatment is a heavy, heavy load for any family,” says Christy Blankenship, LSW, medical social worker. “It drains your bank account, it drains your energy, it drains your spirit. We do whatever we can to take away as much stress on a family as possible. We want them to know they have a lot of people in their corner and they are not doing this alone.”

“I am so thankful to Dayton Children’s and the amazing staff here,” says Shana. “They take care of us, all of us, not just Kelsey.”

After the storm, the sun always shines again. Just when things looked bleakest for the Belcher’s, more members of their community rallied. After seeing their story on the news, an anonymous good Samaritan gave them a home to stay in. Shawna’s Pantry in Dayton donated new furniture, clothing and other necessities. The Blanket Ministry from St. Ferdinand’s Church in Cranberry Township, Pennsylvania made her a new blanket after hearing the one she had for surgery was lost in the storm.

"It's special because it came from somebody and they took the time to do it just for me,” said Kelsey. ”Every surgery, I will have the doctors sign it.”

The road forward is still long. Kelsey and her family get nervous when the clouds grow dark or when a strong wind picks up, wondering if it could happen again. They are not alone in that fear, but they are overcoming it together with the help of a supportive community around them.